Nahoon Reef - There was most definitely a lift in the swell at Nahoon Reef, but it was nowhere the original forecast, and competitors were still comfortable on their standard short-boards, with no need for their step-ups. 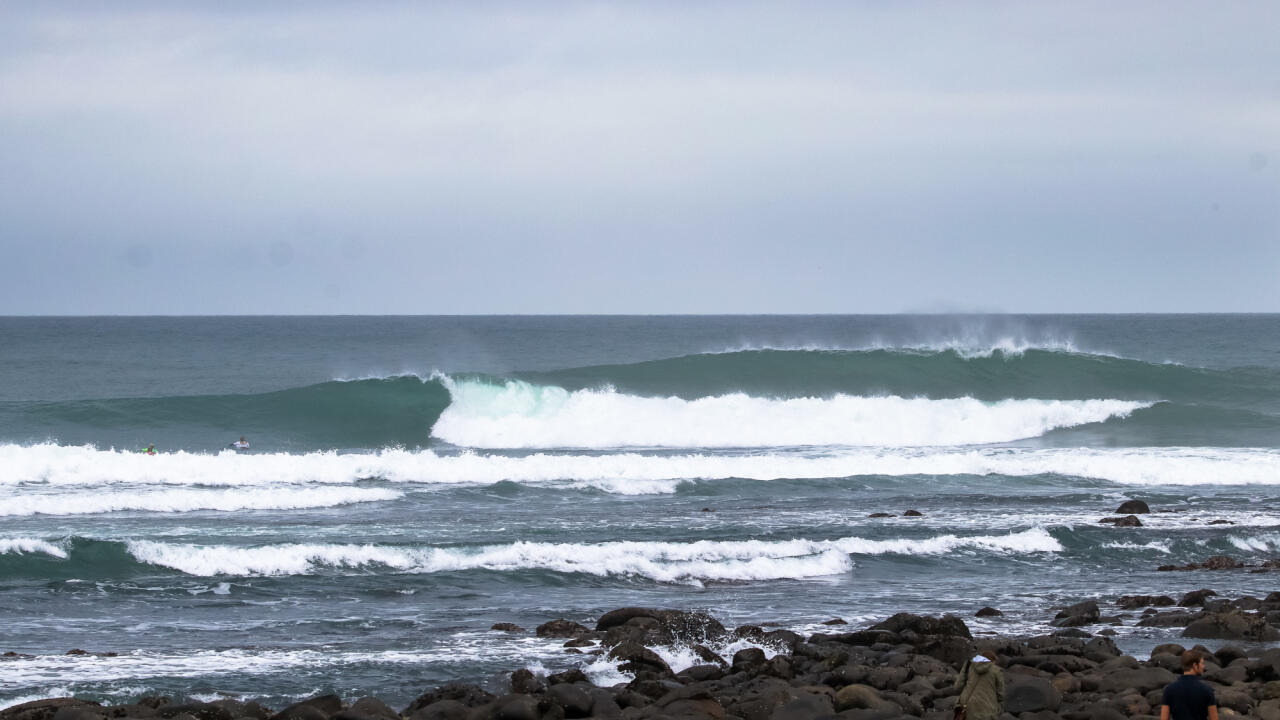 Nahoon Reef is a world class wave with a history of international competitions as well as local surf events over the decades, like the Mitchum Buffalo City Surf Pro pres. by Reef Wetsuits. - WSL / Thurtell

Talking of comfortable on their boards, the winner of the previous WSL Africa event, the Royal St Andrews Hotel Port Alfred Classic, Jordy Maree showed no sign of slowing down or resting on his laurels. He went to town in his Men's QS 1,000 heat today, banking a heat score of 15,75 in the process to see him confidently step into the next round. An on-form Dylan Lightfoot was second and will advance with him, but the shock upset of the heat was the elimination of the defending champion Steven Sawyer along with international competitor Daniel Farr from New Zealand.

Maree started off with an excellent 8.5 "You know, it didn't look that good in the beginning and I almost fell as I took off," said Maree of that wave. "Then it started to bowl and I got in good synch with the wave, and the wave kind of did it for me. I just did about four turns on the wave, actually played it quite safe because it was my first wave, and the other competitors had one or two scores already."

Hailing from Cape Town, Maree agreed that to get the good ones at Nahoon takes a little bit of work. They don't just come to you. "The lineup here at Nahoon reef is really hard, and it isn't easy to get the good ones," reckoned Mare. "It's pretty important to do your homework before heats and get your lineups sorted."

After his recent win at Port Alfred, and then a good result thus far at this event, Maree might be rethinking his strategy a little. "My goal for this year was to just do half the year; surf in the South African events, and then maybe a little bit of QS competing in Europe and possibly Peru," said Maree. "Next year I'm going to try to do a full year on the QS, or as much as I can." Jordy Maree was on fire for the second day of the Mitchum Buffalo City Surf Pro pres. by Reef Wetsuits. - WSL / Thurtell

Dale Staples from St Francis Bay and last year's winner of the JBU Supertrial at J-bay, had a great heat in the morning, coming up against experienced local Greg Emslie. Dale banked two good scores for the heat win, and Greg was left chasing a second ride. By the final siren it was Dale and Greg advancing, at the expense of Liam De Villiers and Brandon Benjamin.

Other surfers who were showing great performances throughout the day were the likes of Shane Sykes, Calvin Goor, Max Elkington, Jake Elkington and Matthew McGillivray to name a few.

It was a massive day for the Women's QS1,000, surfing all the way through to the final in the fine Nahoon conditions, as well as for the Pro Junior Women.

The first Semifinal in the QS 1,000 consisted of Zoë Steyn and Kai Woolf, an evenly matched goofy foot exchange on paper, but it was Woolf who got the upper hand in what was a low scoring exchange. In the second Semifinal, the experienced competitors Faye Zoetmulder and Nicole Pallet faced off, with Pallet putting in a great performance to take the win and advance to the final. Pallet continued her outstanding performances during the final to outpoint Woolf and take the win. Zoe Steyn was showing her skills and talents at Nahoon, with good placings in two divisions. - WSL / Thurtell

In the Pro Junior Women's Semifinals were tense and action packed affairs, with all competitors surfing with fierce determination. When the all the spray had settled, it was Nina Harmse, Kai Woolf, Zoe Steyn and Kirsty McGillivray who advanced through to the final.

Still smarting from her loss in the Women's QS 1,000 final, Woolf turned on the pressure during the JQS Final and in the high tide conditions claimed victory from McGillivray, Steyn and Harmse respectively. No stranger to the podium, Kai Woolf had a standout day with her two good results, a first and a second, in the Mitchum Buffalo City Surf Pro pres. by Reef Wetsuits. - WSL / Thurtell