Glassy head-high surf at Nahoon Reef greeted competitors in the Mitchum Buffalo City Surf Pro pres by Reef Wetsuits for their first day of competition, and event organisers wasted no time in sending out the QS 1,000 Men's round of 64 surfers.

The well-subscribed event is the third stop on the 13-event 2018 WSL Africa Tour, and is the second in the City Surf Series, with over 100 entries across the divisions.

There was top surfing from the outset, with many competitors determined to regain lost ground or to capitalize on good previous performance at this crucial event.

Dylan Lightfoot from J-Bay, currently rated 4th on the 2018 WSL Africa QS Series was quick off the mark in his opening heat, with some fast and powerful surfing from this determined natural-footer. He left room for Calvin Goor to advance with him in second place, and a disappointed Matt Pallet bowing out early. No disgrace to Pallet, as he has been surfing brilliantly throughout the earlier events on the WSL Africa tour, and with many spectators and competitors commenting on his much-improved form and strong mental approach. Local Nahoon surfer and former longtime Championship Tour surfer Greg Emslie was another competitor who dominated in this round, winning his heat with a good score and advancing along with Shane Sykes.

Greg has been surfing Nahoon all his life and knows which waves to take, which ones to leave, and which ones are going to have the best scoring potential. He is also the danger-man at this event, as there is much talk about an approaching swell and subsequent challenging conditions approaching. Surfers with the most experience at Nahoon are going to rise to the top. Local surfer and former CT competitor Greg Emslie is one of the most accomplished surfers in this event, and won his first round heat comfortably. - WSL / THurtell

Shane Sykes from Durban North Coast also did well to place snugly behind Greg in second, and advanced through the heat as well. Sykes is a dynamic young natural-footer who surfs fast and smooth, and has a full repertoire of old school power moves as well as the full gamut of new-school maneuvers. Shane is the sort of surfer who just needs to keep his head down and focus on the job at hand. 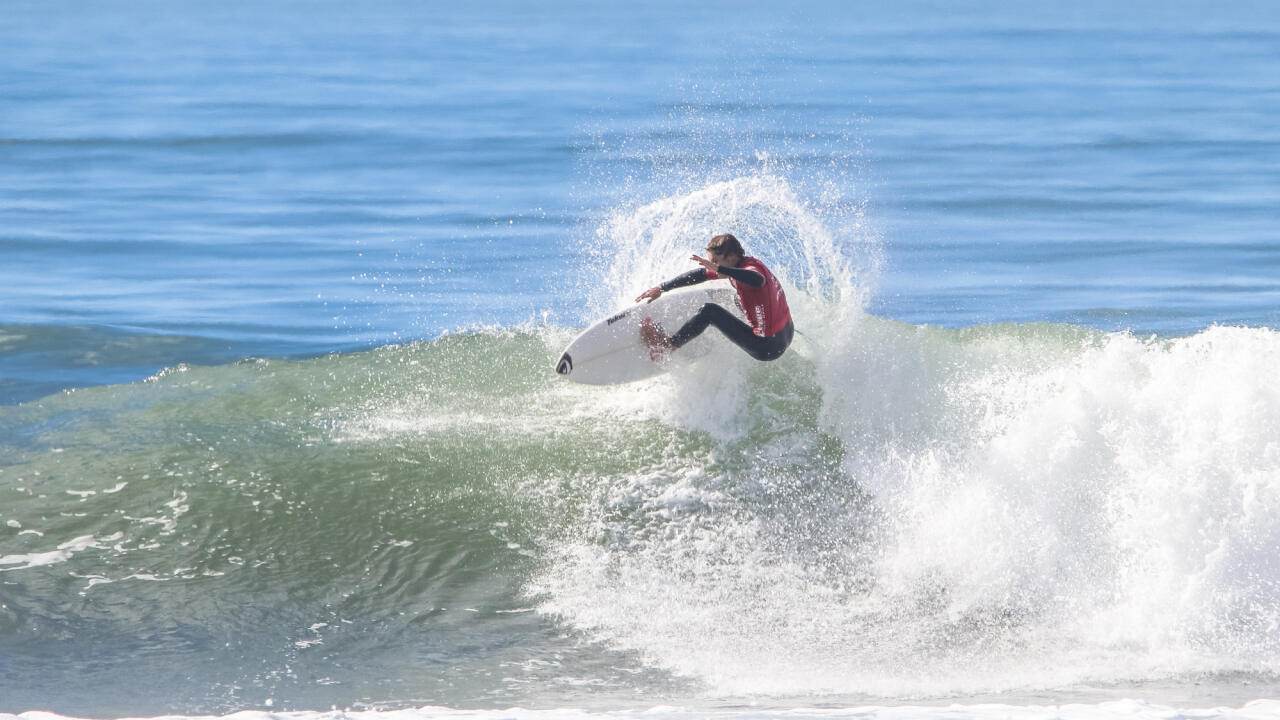 Another J-Bay surfer, Steven Sawyer, has been in the limelight recently, with his runner-up finish at the Royal St Andrews Hotel Port Alfred Classic Longboard Final against Matthew Moir last weekend. Sawyer is defending Men's champion and on a roll at the moment.

Growing up in J-Bay and learning to surf on his backhand at Supertubes, Sawyer is at no disadvantage whatsoever at the right-hand waves of Nahoon Reef, and in fact relishes on surfing on his backhand. He won his heat with relative ease, with Ethan Fletcher in second place moving through to the next round with him. Defending champion Steven Sawyer is on track to defend his title. - WSL / Thurtell

In the Women's QS 1,000 it was another J-Bay surfer, and another goofy-footer, who stole the show in her round 1 encounter. Kai Woolf also threw it down and picked up some great rides to win her opening heat with ease, and advance to the next round.

Although a slight drizzle fell over the contest site during the girls round, it didn't dampen the spirit or the surfing talent in the water. The forecast is still looking strong for the next few days, with great waves predicted to fill in tomorrow morning, along with light winds.

World-class waves and high-performance surfing on the final day in East London.