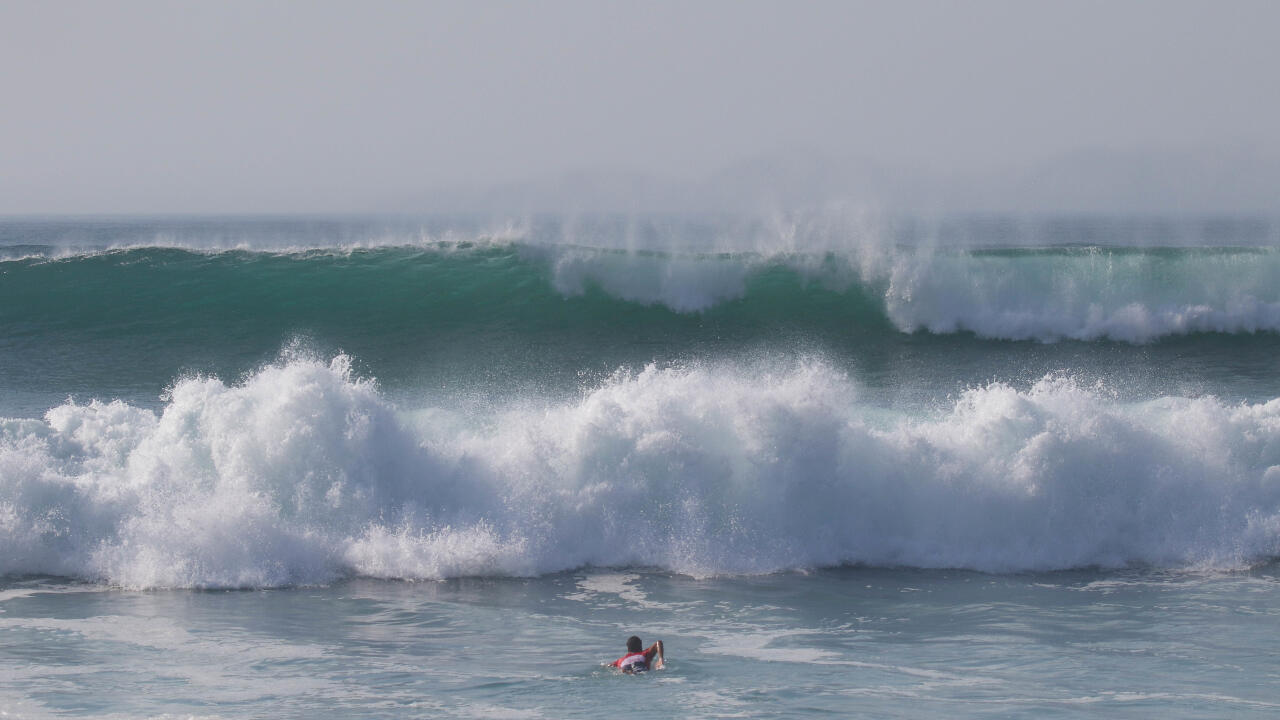 Each year since 2015, juniors arrive in Mexico for the Los Cabos Open of Surf Men's and Women's Pro Junior events in early June -- a marquee event on the North America schedule. But nothing in previous years had prepared them for the unruly, heavy conditions on hand, with waves sizes at the threshold of what Zippers can maintain.

Waves steamed into the event site at six-to-eight and occasional ten-foot sets, with power and no regard for who entered the water. Some of the men and women who could overcome that power with their own, however, showed their potential in unruly surf.

The men's event powered through Rounds 1 and 2, which tees up some emerging and familiar threats for the top seeds, who will compete starting later in the event. Sebastian Williams made his Los Cabos debut one to remember with brilliant performances in both Rounds 1 and 2. The South African spent his childhood on waves similar those at Zippers today, with testing, powerful conditions. Williams went to work on his forehand with the day's top heat total in Round 1, a 14.50 (out of a possible 20), and backed it up in Round 2 with a 14.33, earning an excellent 8.50 (out of a possible 10). 2017 marks Williams' real return to competition as he looks to put together a full year after sustaining a knee injury.

"The waves are so incredible, I just had so much fun out there," he said. "This is my first time to this event and I heard it was flat a few different years, so this is crazy. I grew up on perfect right pointbreaks and to finally have a competition at one is a dream come true. After an injury, I took almost a year off, and to get back into it I was super nervous before the first horn. But, as soon as I got that first wave it was right back into the flow." Nicholas Coli made his presence known on his deadly backhand. - WSL / Andrew Nichols

But, it was San Clemente, California's, Nicholas Coli who tied Williams for highest heat total, and earned the top score of opening day, an 8.67, in his Pro Junior debut. Coli's powerful backhand was hard to match among his fellow contingent as he raced his way through both Round 1 and 2 -- earning a runner-up finish in his Round 2 heat. While the 15-year-old may be a newcomer to the WSL jersey, he's certainly a recognizable face at his homebreak.

"It's my first event so I was just trying to make my heats and didn't want to fall on that section because it was insane," Coli said. "I was just stoked to land that and didn't care what the score was, it just felt so good. There was so much anxiety this morning going through my head. I've just been practicing at Lowers which is perfect because it's the same kind of wave when it's big like this." This event is a fun one, especially just being down here with some of my friends from home, and I'm really looking forward to the rest of it." Current North America No. 4 Bo Raynor is starting his last year as a Pro Junior and is set on making the Top 4 by season's end. While the other top contenders await their start, Raynor's seeding from last season takes effect here at Zippers and had to get started early. But, the North Carolina native began his Los Cabos Open of Surf in solid form, but has a lot more work in front him. Raynor finished with an equal ninth last year, though he's built a foundation to build on moving forward this year.

"I didn't get the best scores, but I never want to peak early and it built some confidence to come out of that heat with a win," Raynor said. "I know I have more in me after having some fun heats last year. It's a totally different wave this year, it's actually a little intimidating out there. You just look down the line and see this big, long wall, but you just have to go and some of them stay open for a few turns. I'm really focused on the Junior Tour this year so I'm stoked to be back here."

The women's Pro Junior international field in attendance displayed their dominance once more over the strong North America contingent with the Australians leading the way.

The Los Cabos Open of Surf Pro Junior is set to start Monday, June 11-13, and features some the region's top talents.

- WSL / MARENELMAR
Tuesday, June 5, 2018 Andrew Nichols
Who Will Step Up as the New Prince of Zippers?

North America's finest Pro Juniors are back at the righthand pointbreak, with a new winner set to be crowned.