"I'm pretty stoked," said the Australian after his third QS win of the year. "I think it is the biggest event I've won so far, so that is really good for me to build the confidence into Ballito."

A lack of waves on the full-tide, tidal shift necessitated a restart for the 30-minute Final when neither of the finalists managed to post a ride in the first 10 minutes.

After the Indian Ocean failed to deliver for nearly another 10 minutes, Masencamp eventually rode the first wave and posted an average 5.67. Baker answered back not long after with the wave of the heat however, posting an excellent-range 8.00 (out of a possible 10) with a variety of power moves all the way from the outside to the shorebreak on a righthander. Jackson Baker scored an 8.0 to take a lead he never relinquished in the final of the Volkswagen SA Open of Surfing. - WSL / Ian Thurtell

"I hope my mom is proud," added the regularfooter. "She passed away about two years ago and I'm pretty sure she sent that one to me," he said.

Baker led from that point all the way to the end, eventually backing the 8.00 up with a 5.33 in the dying minutes. Masencamp -- who will now travel to KwaZulu-Natal to claim his wildcard at the Ballito Pro pres by Billabong -- will be satisfied with his fourth Final in the 2018 City Surf Series.

Affectionately known simultaneously as both the Friendly City and the Windy City, conditions in Port Elizabeth were highly contestable throughout the day, with two-to-three foot waves fanned by the brisk, ubiquitous southwesterly offshore winds.

Baker's route to the top step of the podium included getting the better of French Polynesia's Mihimana Braye in the quarterfinal in the morning and then taking care of Brasil's Theo Fresia in his Semifinal.

Masencamp won his way to the final by beating Australian, Joe Van Dijk in the quarterfinals and then taking down fellow South Africa Slade Prestwich (who had disposed of Mitch Crews in his Quarterfinal) in the Semifinal. Masencamp showed his versatility and changed up his game plan to suit the conditions from the quarter to the semi -- where he stayed busy rather than waiting patiently as in the heat with Van Dijk. Adin Masencamp reached his fourth Final of the year but had to settle for runner-up in Port Elizabeth. - WSL / Ian Thurtell

"I paddled out and I knew exactly what I wanted out there," said Masencamp after the Quarterfinal, explaining that he had been watching a particular peak on the two-to-three foot swell at Port Elizabeth's Pollock Beach. "I sat there until 14 minutes to go, just believing the wave was going to come," he said.

The Capetonian teenager's patience paid off when a left-hander came to him, allowing the regular-footer to go to work on his backhand and post a high seven. "From there I knew I would just need a back-up," he said. The back-up didn't come until the dying minutes once again, but Masencamp held his nerve and found a right to post a 6.00 for a heat total of 13.50. "It's so cool to have longboarding as part of these events now," said Moir on the podium. "I've been doing this since I was 14 and we never had contests. I've been trying to get riders amped for longboarding and get them overseas so having these City Surf Series contests is a good stepping stone."

Round two of the women's QS 3,000 saw a few big upsets, with the likes of Hawaiian Zoe McDougall, who had won the women's Junior Qualifying Series event earlier in the week, counting herself unlucky perhaps, as she had the single biggest wave score of her heat (a 7.33) but failed to back it up.

The local contingent also suffered losses with only Nicole Pallet and Tanika Hoffman surviving, both finishing second in their heats. 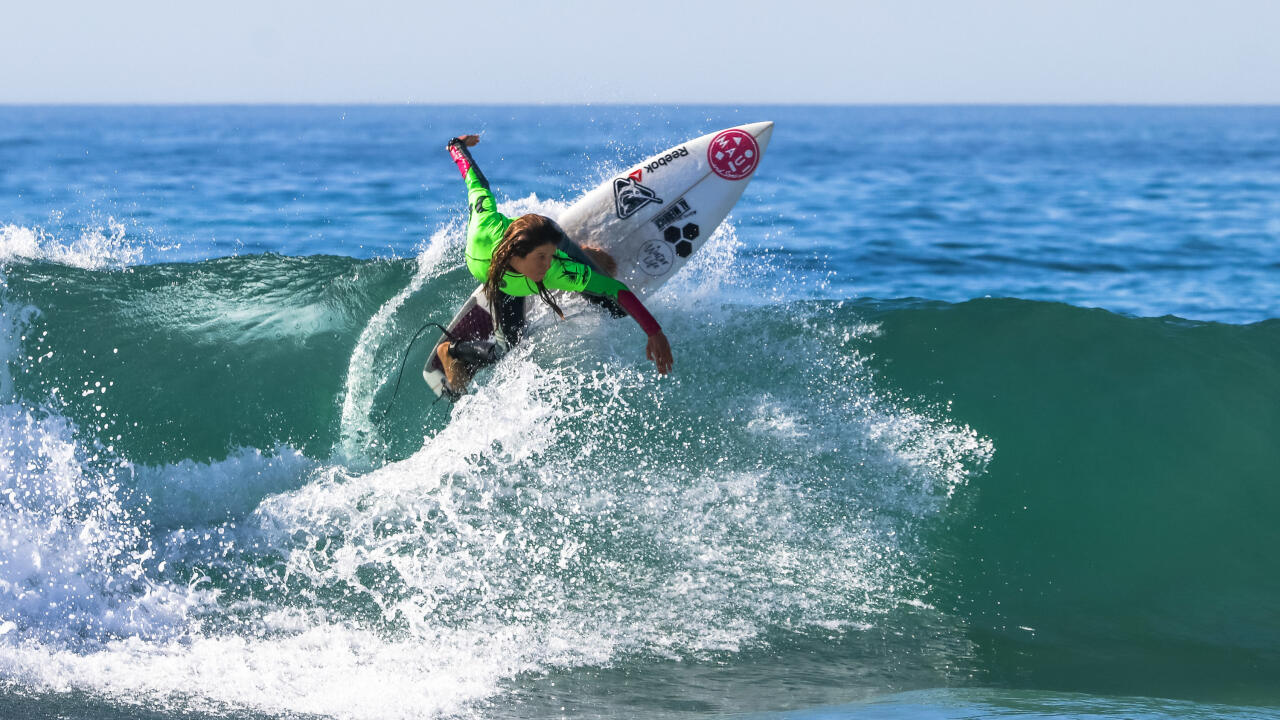 Former World Champion Sofia Mulanovich is through to the last 16 at Pollock Beach. - WSL / Ian Thurtell

Silvana Lima, a current CT surfer, had no problems on the day, however, and continued her charge. She put on a clinic for the less experienced riders and amassed a heat total of 16.00 (7.50 and 8.50) to win her heat.

With the lineup still littered with top-ranked surfers and a precious 3,000 point up for grabs, the final rounds are stacked and are set to provide for exciting action on Sunday.