Furukawa's gem that allowed him multiple, power turns and push the envelope in the small wave grind. - WSL / John Ferguson

Some may call it beginners luck, but Furukawa stole the show and earned a near-perfect 9.60 in the final heat of Round 1 amid tough conditions. It marks the Japanese competitor's first appearance at 1st Street Jetty and he didn't hold anything back. He unloaded his forehand attack for a powerful opening turn before belting multiple maneuvers and finished off on the shoreline to raise the bar of what's expected. Furukawa was able to enter the event as an alternate and could wreak havoc to some of the QS elite here for his first time to Virginia Beach.

"I had a lot of fun in that heat even though it was tough out there and to get that score gives me a lot of confidence," Furukawa said. "This is my first time ever here and the waves are smaller than back home, but it's similar being a fun beachbreak. I'm excited to get into this event since I entered late and get a shot at some points, as well as get some extra heats in the Pro Junior." 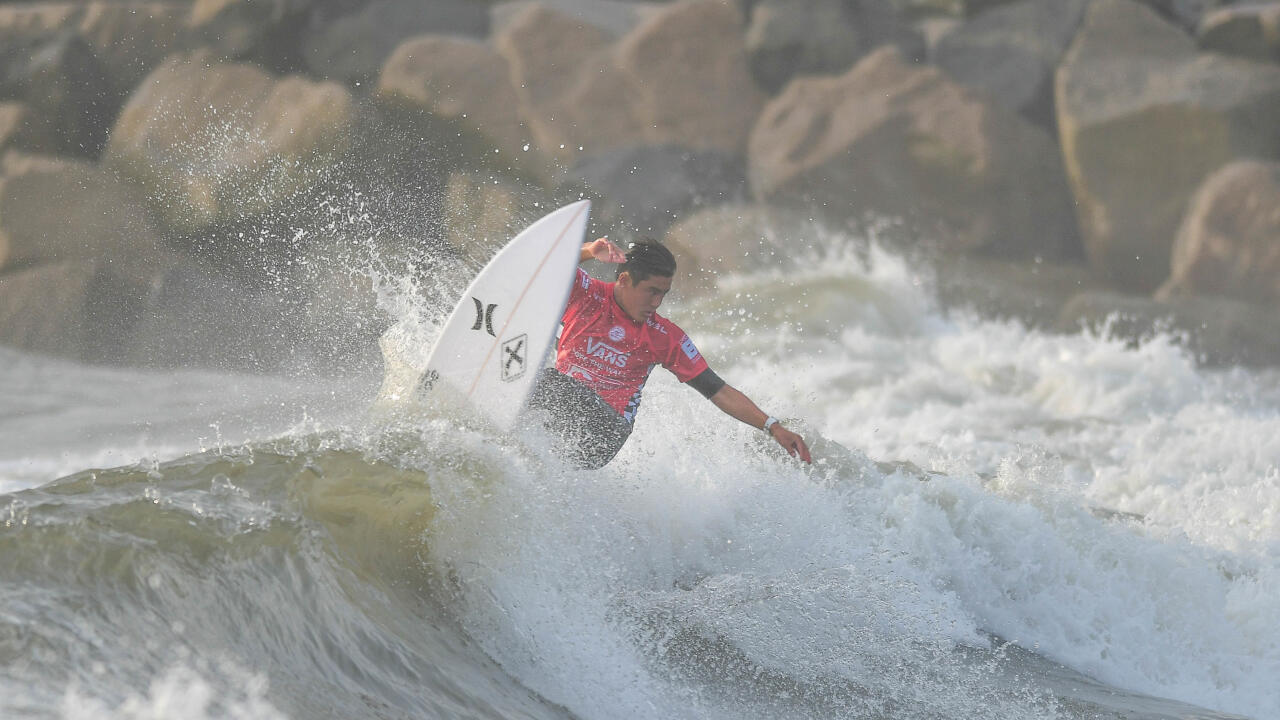 Malibu, California, native Watanabe set the tone for what to expect at 1st Street Jetty with a blistering Round 1 Heat 1 performance. The 16-year-old picked apart the lineup, laying into a righthander with his quick and powerful forehand, to earn a 7.50 and impeccable 14.33 heat total. This marks Watanabe's third appearance in Virginia Beach, but only his second at the QS level and he's looking to capitalize on that knowledge.

"I just wanted to try my best and find any wave I could since it was slow so I'm stoked it worked out," Watanabe said. "I haven't found the secret just yet, but I'm trying to learn more each time I come here. It's really good to have that experience and know what to expect. I just try to figure out what boards work in smaller waves and train those types of waves. This one of the only 3,000s I do during the year so I'm excited to be back and it's good to have a shot at some bigger points." Perez is one of Costa Rica's own in attendance here once more as he continues to scratch for points away from home. Perez has a unique connection with Virginia Beach after building relationships over the years here and gave them something to cheer about after earning a Round 1 win, eliminating Brasilian threat Wesley Santos. The 28-year-old first came to Virginia Beach in 2010 after being denied a visa multiple times by the Costa Rican government, but once here he made an impression on the local community after winning the ECSC Junior event (before becoming the WSL Pro Junior) and Semifinals in the Men's Pro (before becoming a WSL QS).

Since then, he's returned each year and looks to return to that Semifinal spot at the QS level.

"It was so important to hold priority in that heat so you could be on the best waves, but you really had to get into anything you could so it was tough," Perez said. "The waves don't really get this small back home so it's different, but it's part of it and you have to be prepared for anything. It's so good to be back here, I have a lot of friends in this area and it's always great to see them. I have my wife and child here as well which is amazing to share this experience with."

Pro Juniors Grind Through Round 1 Brilliantly Last year's victor Mateus Herdy may not be in attendance this time around, but Motta picked up right where Herdy left off and debuted with impeccable form. The Brasilian posted an 8.17, the only excellent score amid the junior ranks so far, and showed the international threat is imposing once more. It marked Motta's Virginia Beach first-ever appearance at 1st Street Jetty and he hails from the same area as 2015 WSL Champion Adriano de Souza, giving him plenty of motivation.

"You had to surf fast out there and get two or three quick turns for a good score so it felt great to find a wave like that," Motta said. "It's tough and pretty slow, but when the right one comes it can be fun. It's so good to have a bunch of Brasilians here because we're all here for each other. I've just wanted to spend a lot of time in the water to try and figure it out, but I've also been training in similar waves back home -- even a little smaller -- so I'm ready." Cantor is searching for his first result of 2018. - WSL / John Ferguson

The South Carolina native represented well for the East Coast in his Round 1 debut after a tough start to the year. Cantor, 17, still has one full Pro Junior season left ahead of him next year, but isn't planning on remaining stagnant after a slow start in 2018. And, not competing in the QS 3,000, Cantor has his full focus on the Pro Junior which could help prove to be difference maker with his new mindset.

"It feels good to actually win a heat again and I think I've been losing a lot because I overthink my heats," Cantor said. "I'm definitely relieved more when I just go out and surf which is what I did today. Before this event I did the Sweetwater Pro/Am to try and get some heats out of the way so I guess it's working. It's so important to find those waves and take advantage of it. Making the Top 4 this year will be hard with a bad start, but it'll be good to work on my seed for next year."