Crozon won the Pantin Junior Pro by Gadis with smart, sharp surfing today, earning his win in a final bout against Tiago Carrique.

Throughout the event conditions were fun and glassy, but slowed for the French goofyfooters in the finals. Mathis started off quick with a snappy right and a series of snaps that led to a re-entry on the sand, earning him a 7.17. He followed that up with a 7.77 on a longer, slower right that he muscled all the way to the beach. "I'm super happy right now!" said Crozon. "My strategy was to wait for the good ones because it's slow out there. I knew if I got the good ones that, well, I know how to surf, so that means I would get the big scores."

While all surfers have little superstitions they do during heats, throughout the event Mathis would make a pointing gesture to the sky after a good wave or after a heat win. He explained why. Tiago Carrique surfed well all through the event but couldn't quite click in the final. He had been a spoiler of sorts, ending European Junior title contender Justin Becret run in the quarters before stopping red-hot Brazilian Vitor Ferreira in the semis.

In the first semifinal all eyes were on newly minted European Junior Champion Mignot whose quick-twitch surfing worked well in the slow peaks of Pantin. Mignot advanced through the quarters past Dorian Gomez but couldn't get beyond Crozon.

In the women's event darkhorse Gabriella Bryan moved quietly through the ranks. While all eyes were on European Junior crown contenders she was nailing some of the highest scores in the women's draw and dealing with the sometimes tricky conditions at Playa de Pantin. In the final Gabriella opened with a series of turns on a snappy right-hander, earning her the first of two sixes. The inside bank suited her quick, powerful surfing. Juliette Lacome's lanky, graceful approach earned the most points on the more open-faced waves. But few scoring waves like that came through.  One mid-bank left that did come through and Lacome ripped it with a series of backhand snaps for a 5.40. But it wasn't enough to overtake Gabriela and the Hawaiian won with a 12.84 total.

"The inside shore break was looking the best," said Gabriela. "I started out there and got a few scores and it worked. I live at a beachbreak like this in Kauai, so it seemed familiar to me." Earlier today in the women's semifinals Lacome surfed a smart heat to overcome Erostarbe, notching a 7.00 on one small, lengthy right where she laid down a series of carving snaps - about six moves in all on one wave.

The crowning of this year's champion was the other show at the Pantin Junior Pro. The Basque Country's Nadia Erostarbe advanced through her quarterfinal heat to earn enough points to seal the title. "I was trying to do the best I could, and I've been training really hard," said the goofy foot from Zarautz. "I had an injury but I came back stronger. So now it's on to the QS. I will compete at the Pantin QS here this week and hope to do well. I will try to do all the QS events I can, starting in Australia.

Nadia's performances this year have been stellar with top five placings in five events and a win at the Junior Pro Sopela. This was the fourth year that the snappy goofy has placed in the junior tour top ten. 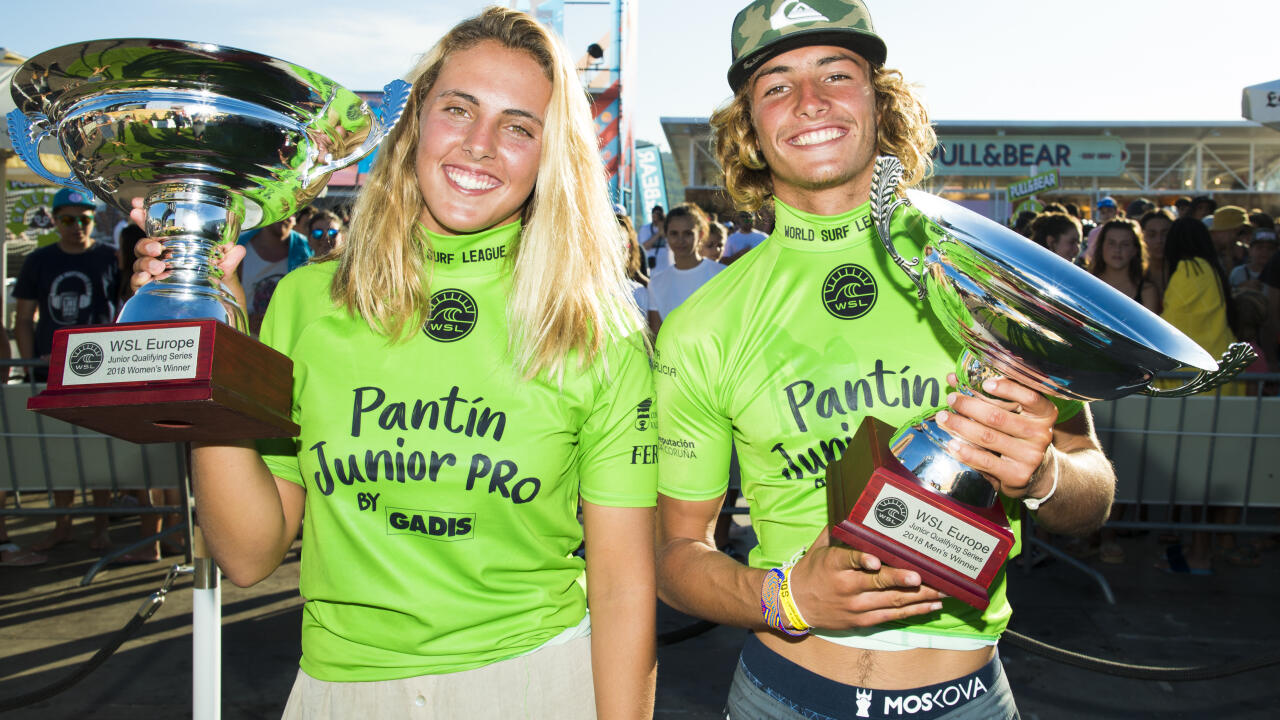 Men's European Junior champion Mignot has been just out of reach of the number one position for the past few years. But he peaked this season winning two events, the Caparica Junior Pro and the Junior Pro Sopela.

The lively regularfoot finished fifth or better in six events with his lowest result coming overseas at the Vans US Open of Surfing - Men's Jr. event. Today's crowning at the event surprised him.

"I'm so stoked and when I'd heard I won I couldn't believe it," said Marco. "But I worked super hard this year and it paid off. I went through a lot mentally and realised I had to work really hard. And I felt ready. I'd come so close twice before this year so I told myself this third one is THE one."

A global citizen (his family raised him on the high seas) Marco splits his time between Mexico and France.

Check out all the photos, videos and updates right here!

1:40
- WSL / Guillaume Arrieta
Saturday, August 25, 2018
Title contenders fire up the drama on the penultimate day of the Pantin Junior Pro