But, the damage was done before calling proceedings off for the day just shy of completing women's Round 2 and the showcase of talent was nothing short of spectacular.

The event's most amazing performance so far belongs to Pavones, Costa Rica, native Leon Glatzer after finding a Perfect 10 with his sky-high, aerial antics. Glatzer blasted a massive, backside full rotation that he landed in the flats and rode out of to garner the event's highest heat total of 17.00 (out of a possible 20). The 21-year-old was sitting in third-place behind Jonathan Zambrano Chila before launching a critical forehand air-reverse to earn a 7.00 and then let it all loose to overtake the lead from Tyler Gunter.

"That was a pretty good first heat and the waves are just amazing right now with the rain keeping the wind away," Glatzer said. "I had second priority and I saw down the line it looked like a closeout, but I saw this perfect lip and just went for it. It was amazing to hear the crowd screaming and that was the game plan was to find those good air sections. Costa Rica's my home, even though my parents are from Germany, I live in Pavones and I've come to Jaco since I was young competing at Nationals so this is where it all started." Carlos Munoz lead the way among his fellow Costa Rican competitors with an impeccable 15.43 heat total, dropping an excellent 8.00, and moves into Round 3 with a lot of weight off his shoulders. The QS veteran, at just 25-years-old, has been a role model for those coming up the ranks and continued that on his home soil today.

It was also another great day for Tico competitors as Noe Mar McGonagle, Tomas King, Andreas Mora, Oscar Urbina, Jairo Perez, Anthony Fillingim, and a surprise performance from 15-year-old Sam Reidy, all found their way to a Round 3 appearance with plenty of support all around them. "I'm very happy and now there's a lot of pressure off just getting through that first heat," Munoz said. "It's nice to make that first wave count after I've been surfing here all week so I know how it breaks which is important. I saw that air from Leon (Glatzer) and I was psyching to get out there (laughs). But, I have my family here, my friends, and a lot of people supporting me and the guys so it's amazing. I always talk about how the level is here in Costa Rica with everyone pushing each other. They make Nationals and beat me a lot so I'm stoked they have the opportunity to compete at the professional level against this level of talent." Wesley Leite led the Brasilian charge as they boast a strong presence of their own into Round 3. - WSL / Andrew Nichols

Brasilian talent Wesley Leite makes his second appearance in Costa Rica after the 2016 Essential Costa Rica Surf Open, but is hoping to better his equal 33rd this time around. Leite put together a complete heat, earning an 8.33 and 7.60, en route to his heat win and joins fellow Brasilians Luel Felipe, Alan Donato, Pedro Neves, Pedro Nogueira, and Herbert Moreno -- who posted an 8.50 of his own.

"I trained so hard in Brazil for this competition and I need points, but I'm feeling good after that first heat so hopefully I can keep making more," Leite said. "It's so cool to have this event back, especially at this place where there's rights and lefts, and I'm just trying to enjoy it all with good vibes all around. My best result was in Israel where I made Round 6 and I'm still learning how to surf in heats because it's so difficult as opposed to freesurfing where I know I can do well. This is an important one, but I'll take it step by step and see how good I can do." 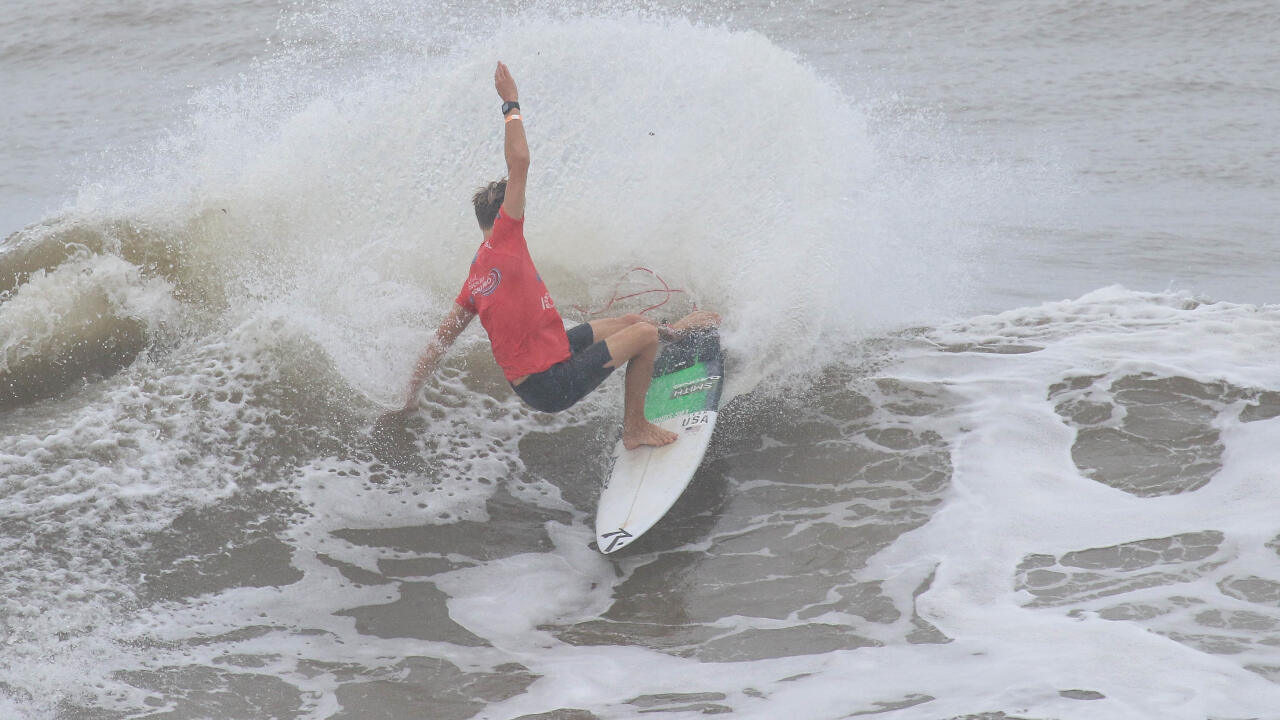 Kevin Schulz's flow was intact in his debut, dropping an excellent 8.33, and kept pace with his contenders. - WSL / Andrew Nichols

Also earning critical Round 2 wins, current North America No. 1Kevin Schulz, No. 2 Lucca Mesinas, No. 3 Josh Burke all advanced into Round 3 with a lot of momentum.

"It feels really good to get that start and there's a little more lump to it than it looks on the cam so that made it a little more tricky, but it's still so fun," Schulz said. "I was going right a lot in the freesurfs with the windswell and once that wind backed off the lefts seemed to open up more. I was lucky to find some that gave me a good wall the whole way through and get those scores.

A 7:30am MDT call will determine an 8:00am start for either men's Round 3 or the remaining heats of women's Round 2.