Competition is underway at the 2018 Taiwan Open World Longboard Champs. After competitors were greeted by epic waves first thing in the morning and during the local trials, strong winds came in from the north during the third heat of the day, forcing event organisers to put the contest on hold. In the late afternoon the wind swung offshore and competition resumed, completing 7 heats of Men's Round 1.

French brothers Edouard and Antoine Delpero were also standouts on the opening day of competition, each taking solid heat wins at Jinzun Harbour. Antoine posted an excellent 8.83 for two long nose rides then backed it up to post a 16.00 point heat total, the highest of the event so far. Edouard, who won the 2017 Taiwan Open of Surfing, started his campaign where he left off with a dominant opening Round win.

"It feels so good to be back," Edouard said. "I had such an amazing time here last year and every other time I have been, so I always love to come here. I had a tough heat today as it is almost too big for this spot. When you could find the right one that would hit the reef, they were perfect. I can't wait to see what the next few days bring." 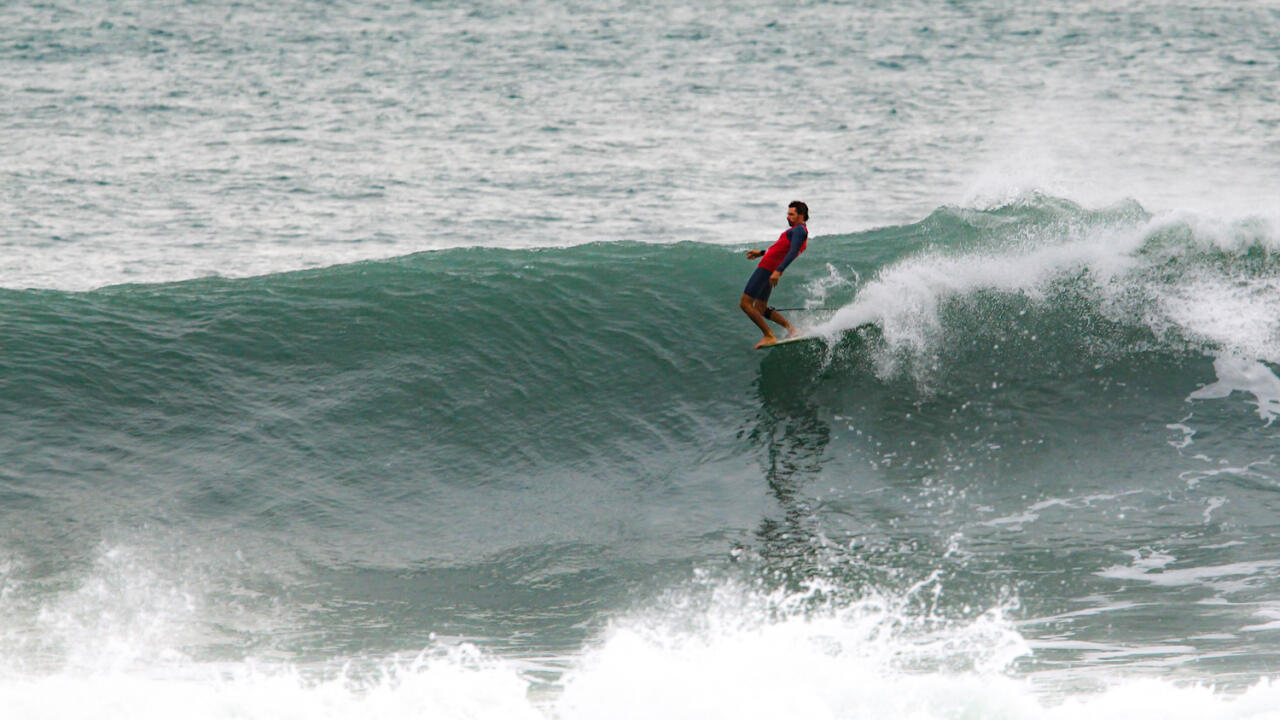 Antoine Delpro was all style on the opening day of competition. - WSL / Tim Hain

The opening heat of the competition saw the clean 4-to-6 foot peaks spilling into Jinzun Harbour as Californian Cole Robbins (USA) came up against Aussie duo Jack Entwistle (AUS) and Dean Bevan (AUS). Robbins got an early start, posting a two-wave total of 12.50 early, then struggled to find a wave of substance for the remainder of the heat. Entwistle and Bevan traded lefts and rights, but it was the traditional flow combined with smooth carves that saw Robbins take the win and progress into Round 3. The two Australians will now do battle in elimination Round 2.

"That was the first time I've ever surfed the first heat of a contest and to be honest I didn't find it too nerve-racking," Robbins said. "The judges haven't really set a scale yet so you can just go out and surf without too much of a plan which suits me. It feels really good to start off the event with a heat win, especially because I'll skip Round 2 -- which is a massive bonus. The waves today are so good, there is plenty of push in the swell and it's super clean." Cole Robbins taking out the opening heat of the 2018 WLC. - WSL / Tim Hain

With the wind increasing and conditions deteriorating, former World Champion Phil Rajzman (BRA) had to work hard to take out his Round 1 matchup with Hawaiian pair Duane Desoto (HAW) and Scotty Fong Jnr (HAW). Rajzman's powerful brand of surfing suited the strong winds and large waves as he took a convincing win to progress.

"The wind really came up at the start of that heat and everything changed a lot," Rajzman said. "Earlier was so nice and clean so I had to change things up a bit, but I stuck to my same strategy. I've been here for a few days now so am used to this spot and how much it can change. It was always going to be tough in these bigger waves against two Hawaiian's as they are so good when it's like this -- I just made sure I got the best waves and that got me the win." Phil Rajzman with an exceptional mix of power and tradition. - WSL / Jack Barripp

After a 3 hour hold due to strong winds, event directors returned to Jinzun to find cleanly groomed sets marching towards shore which made the decision to call the event back on an easy one. It was also a decision that reigning World Longboard Champion Taylor Jensen was in agreeance with. The three-time world champion looked right at home in the powerful clean conditions posting a 15.17, to win his first heat at Jinzun since his title victory in 2017.

"It's so nice to have some bigger clean waves," Jensen said. "I've been coming here for almost 10 years now and it is definitely the best I've ever seen it. It looks like we will have waves for the next few days as well so it should be a great event. After last year's win, I'm way more relaxed here so I'm hoping to enjoy this event a bit." Competition is set to resume tomorrow with more epic conditions expected and the remaining heats of Men's Round 1 to be completed. Be sure to tune in as event directors make a call at 6:30 am local time for a potential 7:00 am start.