Just a day after two new WSL World Longboard Champions were crowned at Jinzun Harbour, the Taiwan Open World Junior Championships has commenced in super clean 2-to-4 foot waves. With great surf and light winds all day, event directors were able to run through both Men's and Women's Round 1. Caleb Tancred was lucky to sneak through his Round 1 heat with a last ditch effort to move into first. - WSL / Tim Hain

Californian duo Kirra Pinkerton and Alyssa Spencer dominated the opening Round of the Women's event, both posting excellent scores to progress directly into round 3. After a dominating season on the North America Junior Qualifying Series (JQS), San Clemente native Pinkerton came into the 2018 Taiwan Open World Juniors as a clear favourite and her performance in Round 1 showed why. Pinkerton posted a 15.40 heat total to put her opponents in a combination situation (needing two scores) and convincingly win the heat.

"This wave is really similar to a few places at home so I feel like I'm really prepared for this event," Pinkerton said. "I've had a great year of competing so my confidence is up and I just feel good about my surfing which is always good when you're competing. I've been here for a few days now and it is really amazing -- not what I was expecting at all." Alyssa Spencer put on the most dominating performance of Women's Round 1, winning with a 17.03 two-wave total. Spencer's impressive scoreline included a near perfect 9.33 which she was awarded for a long righthander that offered section after section for her to decimate with her razor-sharp backhand attack.

"I had seen a few waves like that coming through earlier and knew if I waited in the right spot I could get one," Spencer said. "When I took off on it I got a good section for my first turn then it just kept bowling out down the bank -- it was so much fun." Zahli Kelly continued her stellar Junior record on the Australia / Oceania JQS in 2018, surfing in 4 Finals of the 7 events. Kelly got her WJC campaign off to a good start by overcoming Anat Lelior and Nadia Erostarbe in Heat 4 of Round 1. Kelly's brand of smooth on rail surfing was a perfect match for the glassy walls on offer at Jinzun Harbour for Day 1.

"I love this place -- it's awesome," Kelly said. "I've been here for five days now and just love everything about it, the waves are fun and the coastline is super pretty. I'm stoked to have made it through the opening Round and skip Round 2. I'm just stoked to surf a contest in such fun waves." 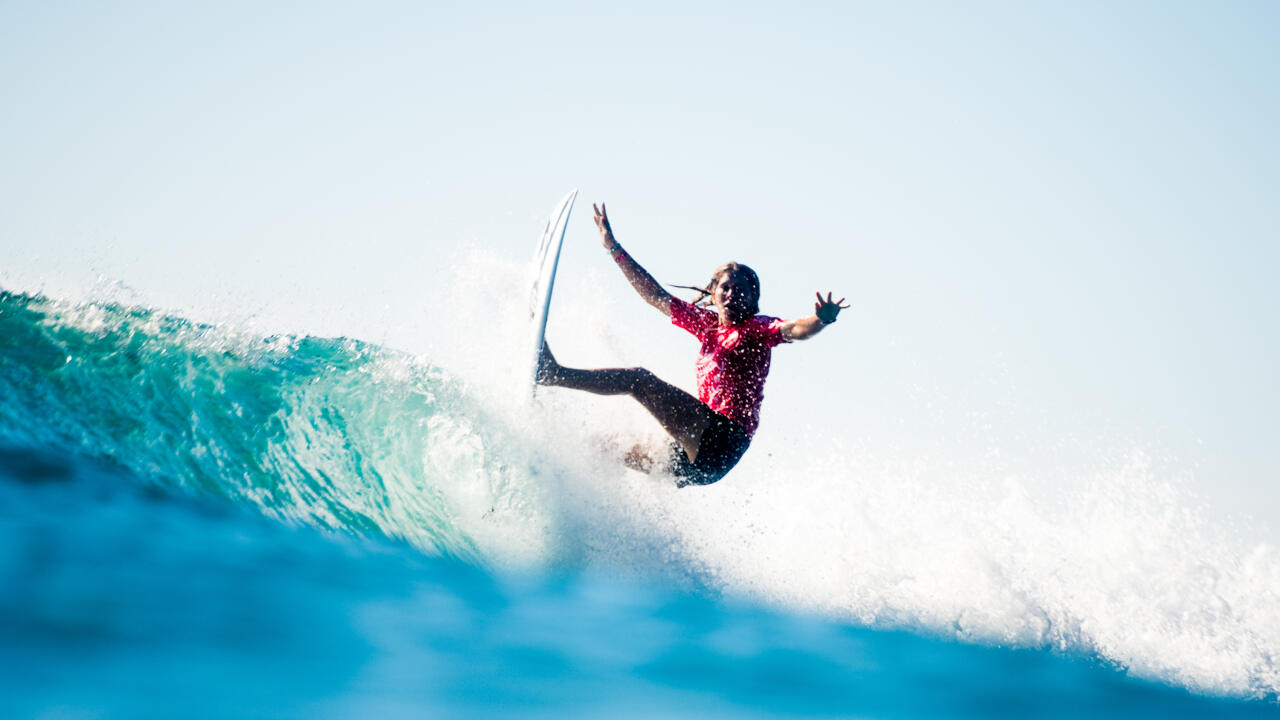 Zahli Kelly was the only Aussie to win in Round 1. - WSL / Jack Barripp

Fresh off a runner-up finish at the recent Hawaiian Pro QS10,000 event, Brazilian livewire Mateus Herdy comes into the Taiwan Open with more competitive confidence than most of his opponents. Herdy's experience shone through as he roamed the lineup, catching over 10 waves to eventually post a 15.83 heat total and progress into Round 3.

"Surfing in the 10,000 events is definitely a big learning experience for me," Herdy said. "I wasn't going to come here and then when I was eliminated from Sunset I came straight here. I'm so glad that I made it as it is such a beautiful place and the waves seem so fun -- I'd definitely want to come back here in future years." Mateus Herdy will be one to watch in Taiwan. - WSL / Jack Barripp

Herdy's compatriot Samuel Pupo posted the highest heat total of Men's Round 1 with a two-wave combination of 15.84. Brother of Championship Tour wildcard Miguel Pupo, Sammy surfed with incredible speed and power to overcome Crosby Colapinto and Kai Tandler in one of the most exciting Round 1 match-ups.

"That was a really fun heat," Pupo said. "This is a great wave for a contest as there are a few peaks and lefts and rights so there is plenty of opportunity. I've had a really good year of competing. I've been travelling with my older brother Miguel and doing QS events with him which has taught me a lot. I draw a lot of inspiration from my brother." Having finished equal third at the the Taiwan Open Qualifying Series event last year, Indonesia's Rio Waida is no stranger to Jinzun Harbour. The super fast natural-footer has been warming up in Taiwan for over a week and his intimate knowledge of the wave is evident as he picked off the best waves in his 30-minute matchup against Toy Tanaka and Cole Alves.

"I've been here for about a week already and I was here for a QS last year so I feel like I know this wave very well," Waida said. "It's hard watching all day and waiting for your heat because the waves are so fun that I just wanted to get out there for a surf. It was a super fun heat, I was able to do a couple of airs. I am feeling really good and really enjoying being here in Taiwan with the best juniors from all over the world." The French contingent of the 2018 WJC had an impressive run on Day 1 of competition with Marco Mignot, Tiago Carrique and Kauli Vast all taking out their opening round heats. American duo Tyler Gunter and Eithan Osborne along with Caleb Tancred, Kade Mattson and Luke Tompson also won in Round 1.

Event directors will reconvene at Jinzun Harbour tomorrow morning to make a call on competition which is likely to get underway at 7:00 am local time.