After two consecutive lay days in Israel, the QS 3,000 Seat Pro Netanya got back underway today, this time in challenging, wind-affected waves in the three-to-five foot range. The shifting lineup presented major issues to most, but a lucky few found that perfect little ramp amidst chaos and went big.

Yuji Nishi was nowhere safe in Round 3, Heat 13 with two average scores on the board until he threw caution to the wind quite literally and sent a massive forehand rotation. The Japanese regular foot managed to control his maneuver perfectly despite the strong side shore wind and landed it clean for an incredible 9.10 and the heat win. Unfortunately the young Japanese didn't manage to keep his flow going into the next round and bowed out in equal 9th. 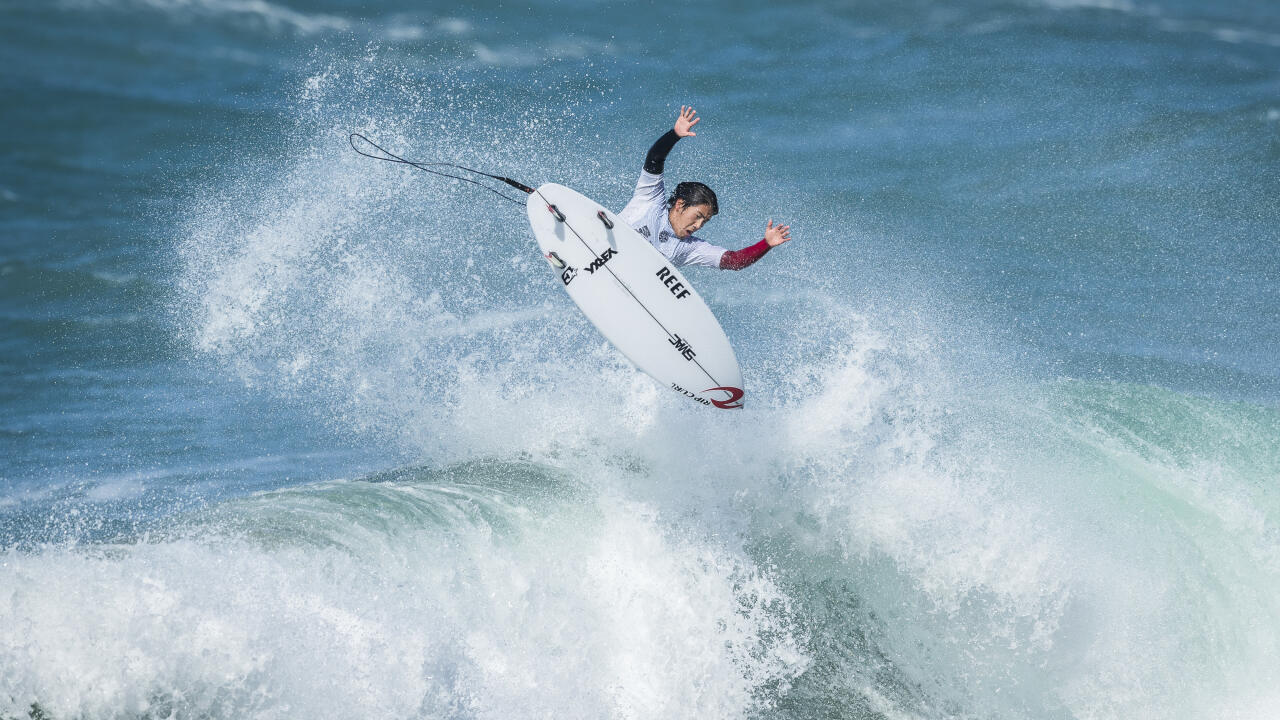 "That wave was meant for an air...I had to go for it," said Nishi. "I was a little nervous to go for it because I didn't have a good score but I've been training for those the past couple of days so I told myself I could do it."

In the first heat of Round 4, Justin Becret was in an even worse situation, sitting in fourth with seconds on the clock needing a high 8 to advance. But as a similar section showed up, the Frenchman sent a committed air into the flats and received his own 9.10 to take out the heat and eliminate high seed Marc Lacomare. "I had nothing to lose so when I saw that right pop up I just knew I had to go big," he said. "I threw the maneuver forward to avoid the rebound of the whitewater and it felt like I rotated quite fast. That section was pretty heavy too. I like going for airs but it's true that I usually keep them for when I really need something special."

Earlier today, competition resumed with the defending event champion Matthew McGillivray launching his campaign in Round 3. The J-Bay local went head-to-head with Ben Coffey and both surfers fought for the lead as it changed hands several times. Eventually, Coffey's backup wave was enough to take first place, and the South African placed second. McGillivray kickstarted an impressive QS run last year with his win in Netanya and is looking to repeat just that in 2019. He later made his Round 4 heat in second position with a last-second effort as well. "I have such good memories from last year so I was really excited to be back here again," he said. "It was a momentum shift for me winning here and it helped so much with the confidence. I finished with a good seeding, picking up more points in Hawaii and I'm just hoping to make the best of it in the first half of this year. I had a really nice break at home enjoying summer in J-Bay spending quality time with the family and relaxing."

San Clemente's Cole Houshmand advanced through both his heats today besting fellow Californian Ian Crane and McGillivray later on. Freshly graduated from the junior class, his first full-time season started extremely well in Netanya with one of the day's best heat totals with a 14.83 which included an excellent 8.50 for two big backhand turns on his very first wave. "I was lucky I was in position for that one," said Houshmand. "It's one of those righthand rip bowls against the jetty that held up for two big turns and I was stoked to open up with that. The last two years I've done a few QS events and finished in the Top 200 so nothing special but now I'm really focusing on making the bigger events. It's my first time here and I love it. We did some sight-seeing and the people here are really friendly."

Jorgann Couzinet, Eithan Osborne, Tristan Guilbaud, Maxime Huscenot and Leo Paul Etienne were the other top scorers in Round 4 who will lead the field into the next day of competition. The event has been called OFF Wednesday as a massive swell and gale-force winds are expected to wreck havoc on Netanya and event officials will come back Thursday at 10 a.m to re-assess conditions.

Tune in from January 10-19 and check out all the photos, videos and updates right here.