Victoria Bay - Perfect waves peeling down one of South Africa's best point-breaks greeted competitors on opening day of the inaugural Vic Bay Classic - stop number 7 on the WSL Africa Tour and the final event in the popular City Surf Series.

The Men's JQS 1,000 were sent out, and took the set waves apart from the get-go. Aya Gericke started off well in heat 1, banking a total of 14.50, the highest heat total of the round, advancing along with Mitch Du Preez. The only foreigner in the event, Lenni Jensen from Germany, was unfortunately eliminated from the contest in this round. Awesome set-up for the opening day of the Vic Bay Classic. - WSL / Thurtell

In the Women's JQS 1,000 opening heats it was all abut the internationals, with foreign surfers featuring. Rachel Presti from Germany and Piper Harrison from Australia both advanced ahead of favorite Ceara Knight, Tru Starling from Australia won through, as did Julie Nishimoto from Japan and Anne Dos Santos from Brazil. Piper Harrison has had a good run in South Africa, and is looking good for another great result at Vic Bay. - WSL / Thurtell

The Women's QS 1,000 Round of 32 was an exciting affair, with some big scores. Philippa Anderson from Australia won her heat with some excellent surfing, including an 8.5 ride, and Lucia Martino from Spain followed suit, putting 15 points onto the scoreboard for the highest heat total in this round. Local Bianca Buitendag surfed brilliantly at her home break, and won the third heat, while Rachel Presti from Germany took the win as did Leilani McGonagle from Costa Rica, Justine Dupont from France, Kayla Nogueira from South Africa, and Piper Harrison from Australia. Bianca Buitendag was comfortable in her heat today on the first day of competition at the Vic Bay Classic. - WSL / Thurtell

There was a lot going on with the Men's QS 1,000 contest, as the waves improved and sets continued pouring through. South Africans to advance included Luke Thompson and Beyrick De Vries, Sean Holmes, Bryce Du Preez, Mark Zunckel, Dillon Hendricks and Forrest Hair.

Holmes holds a unique place in the history of surfing in South Africa that included beating the late Andy Irons and Kelly Slater more often than not at J-Bay, where he was recognized as the most dangerous wild-card on tour, and nicknamed 'The Nemesis' for his 3-0 winning ratio against Irons. Holmes was all laughs and good humor after advancing through his heat along with Dylan Groen from Germany.

"I had a bit of cobwebs out there to be honest, and was a bit shaky on my first few waves," said Holmes after his heat. "It was my first QS event in a very long while. I didn't even know there was a priority system and couldn't understand why the guys were all lining up. Still, it was super-clean three-foot Vic Bay, a nice warm winter's day of about 20 degrees, and an absolute great day down here for the event. Tomorrow looks to be great as well. So stoked to be down here." 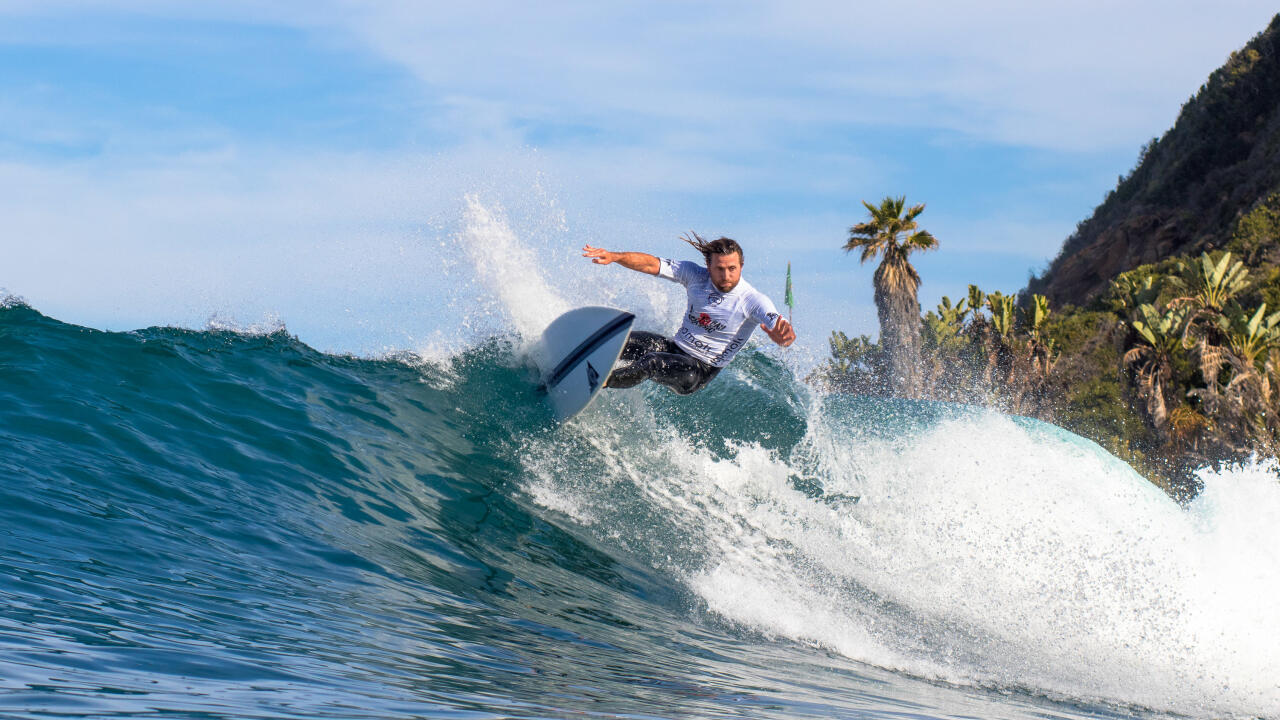 Sean Holmes might be a little rusty, but he is one of the best surfers that South Africa has produced, and is still in the event. - WSL / Thurtell

The forecast for Friday looks much the same, with a clean little swell sticking around and the tides and weather remain fine. The extended forecast shows some big swell coming for the closing day. The event is going to finish with a bang.