Victoria Bay - Slade Prestwich and Bianca Buitendag are the Men and Women's Vic Bay Classic QS 1,000 winners, while Luke Slijpen and Piper Harrison from Australia won the JQS 1,000 Men and Women's contests respectively. It was a day of excellent surf at one of South Africa's premier right-hand point-breaks, and the culmination of three days of incredible waves and non-stop high performance surfing.

In the Men's QS 1,000 final Adin Masencamp started off strong, launching into the lead after the first exchange with an excellent-scoring 8.85, and looking the part for another win after last weekend's victory at the Volkswagen SA Open of Surfing pres by Hurley. Prestwich made his move soon after this exchange however, and picked up the best looking wave of the final to go totally to town on it, fitting in a series of searing rail carves, tight snaps and fins-free moves above the lip for a gigantic score of 9.90. Combined with his opener of 8.75 he had the final in the bag. Beyrick De Vries, was hunting the big scores but couldn't find the set waves to really lay it down, while the lone Australian Chris Zaffis was picking up on anything and trying his hardest to surf with innovation and flair to get into the game. By the end of the final Prestwich held steady for the win, his first QS win ever, with Zaffis, De Vries and Masencamp finishing up in second, third and fourth respectively.

"I'm a bit rusty as I haven't had a win in a long time," said a stoked Prestwich at the prize-giving. "I love it here and when I heard Vic Bay was on I wanted to give it a chance." Slade will now go to compete at the Ballito Pro pres by O'Neill "I love Ballito," said Prestwich. "It's really good up there and the waves are good with loads of power." In the Women's QS 1,000 all eyes were on the experienced local goofy-footer Bianca Buitendag. A former Championship Tour surfer and a Victoria Bay local, she had everything going in the final. She went into the lead early, with Rachel Presti from Germany breathing down her neck. At the mid-way mark, Buitendag picked up a solid set wave and smashed the lip on a big outside section, followed by a series of critical turns for a 9.65 score and a very solid lead. Piper Harrison from Australia came back from behind in the final half to end up in second, with Presti in third and Justine Dupont from France in fourth. 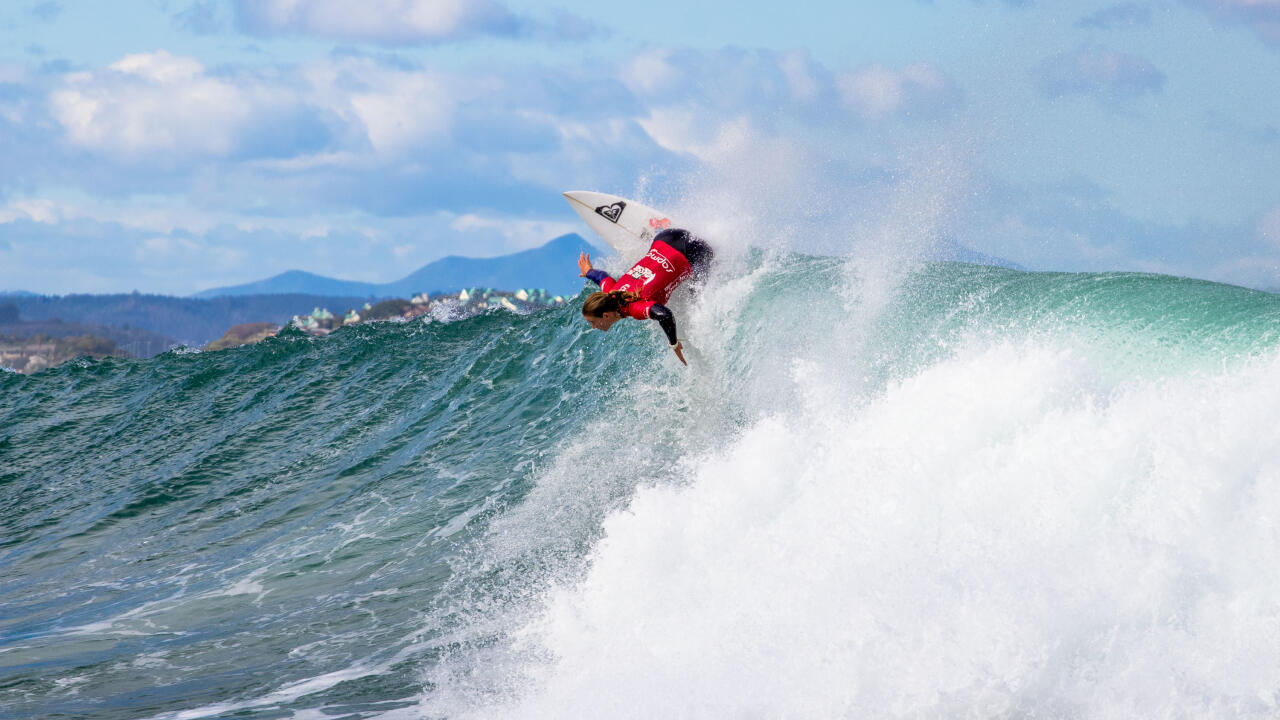 The effervescent Bianca Buitendag was a very happy victor at her home break of Victoria Bay. - WSL / Thurtell

In the Men's JQS 1,000 Luke Thompson took off on a bomb and ramped over the take-off boil for an absolute screamer, banking some big turns and lip cracks for a massive score of 7.5. He was taking no prisoners, and the youngest surfer in the final picked up another set wave and put an 8.5 onto the board, putting the rest of the finalists into a combination situation. With 16.00 points next to his name, it was a looking like a fight for second place. Luke Slijpen was having none of it, and went for one massive air reverse into the flats, but just lost it on the landing. Not happy with his performance, Slijpen put it all on the line for a last-ditch effort on a final wave, and a series of critical snaps connected by deep bottom turns and executed with speed, power and flow, saw him rewarded with the highest heat score of a 9.65, and the lead. He hung on until the final siren, with Thompson in second, and with Karl Steen and Saxton Randall in the minor slots. In the Women's JQS 1,000 event Piper Harrison from Australia drew first blood with an opening ride of 8.00 points for a long ride from the outside, punctuated with a series of critical turns. Zoë Steyn from South Africa came back strong however, and found the perfect right-handers of Victoria Bay to her liking. She soon put two good scores down and slipped into the lead. The Japanese surfer Julie Nishimoto found some good waves, but Harrison and Steyn were finding the big scores and Harrison banked another great score for the win, with Steyn in second, and Nishimoto in third. The points actually saw Harrison and Steyn tied for first place, but the Australian had the single highest score, and was awarded the win. Rachel Presti from Germany was pushing hard but couldn't find the good ones. Picking up a few low-scoring waves, she finished off in fourth place. Piper Harrison was the on-form winner of the Women's JQS 1,000 at the Vic Bay Classic. - WSL / Thurtell

The next event on the WSL Africa tour is the Ballito Pro pres by O'Neill from July 1-7.