Brief Overview:
A large swell arrives late today Friday, peaks on Saturday and then decreases through Sunday. Conditions are poor throughout, with strong onshore winds.

Synopsis:
Today's chart contains a powerful area of low pressure centred over southwest Ireland, with a strong fetch on its southern flank pushing some large swell into the contest area, accompanied by very lumpy conditions. The system is moving steadily northwest and weakening, expected over Scotland by Saturday and then disappearing off into the North Sea by Sunday. 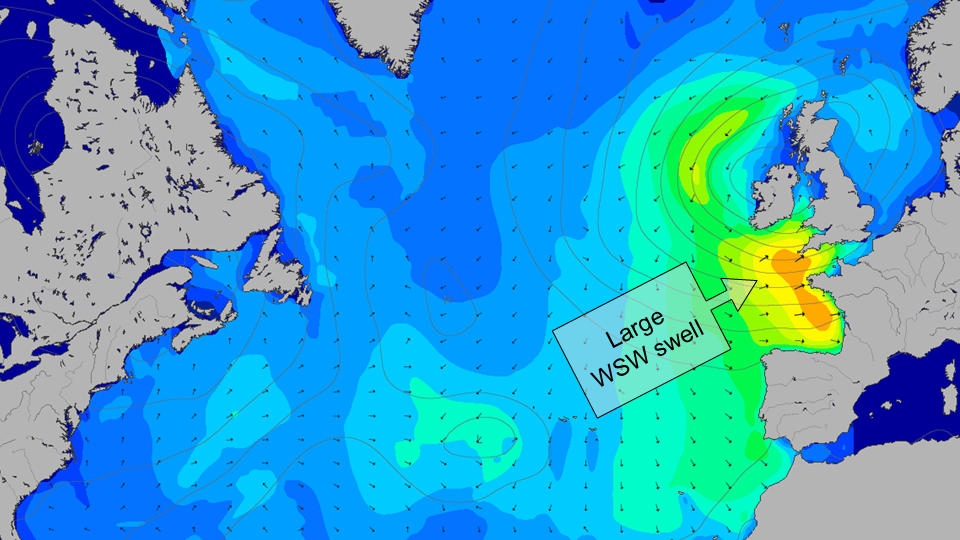 Outlook:
Wave heights are currently still small, as that swell initially arrives from the south. However, later today expect a rapid increase to around four or five feet as the swell direction veers southwest. Winds are strong to gale force cross-shores from the south, veering SSW later.

On Saturday the swell fills in big-time, peaking at well over six feet in the morning then gradually tapering off during the day. Conditions are difficult, with strong to gale-force onshore winds from the WSW for most of the day.

Sunday sees a decrease in wave heights, down to around four feet or so initially, becoming smaller towards the end of the afternoon. Swell quality is poor and winds continue onshore, fresh gusting strong from the west or WSW.

Forecast reliabilities are good for the remainder of the contest period.