When the East Coast delivers, it provides plenty and the WRV Outer Banks Pro QS 1,000 presented by Pacifico was on the receiving end for opening day magic at Jennette's Pier. Three-to-four foot, occasional plus sets, swell allowed the men's contingent to put on a show as competition scorched through Rounds 1 and 2 despite scattered, heavy fog that made its way in and out of morning affairs.

Numerous excellent scores, meaning an 8.00 or higher out of a possible 10, were posted with multiple near-perfect rides and even a Perfect 10 from Barbados' top prospect. With more of the same swell looking to continue, the women will get a chance to join the action as men's Round 3 awaits stacked match-ups.

Burke Untouchable In Round 2 Perfect Debut Burke (cover picture) not only showcased his aerial assault, but got his heat started with signature power hacks. - WSL / John Ferguson

Round 1 showcased the potential threats to top seeds, but Josh Burke seemed to not be phased by any of it and went on about his business to soar a massive air-reverse before stomping it cleanly for perfection. But, Burke wasn't done and jumped right back into another gem for an 8.33 to post an unmatched 18.33. The 22-year-old came into this event with a sharp focus and showed that right out of the gates to gain lost ground from Virginia Beach.

"I was just trying to build through that heat and I got settled into it pretty early with a few scores which was nice but then I just held priority and got that bomb of a wave," Burke said. "That was a great heat for me just getting an 8.33 right after so hopefully I can just keep doing that. I believe in myself and know I can do that every heat so I'll be happy with that win but every heat is different so I won't stay psyched on those scores and just hoping to get more sections like today." 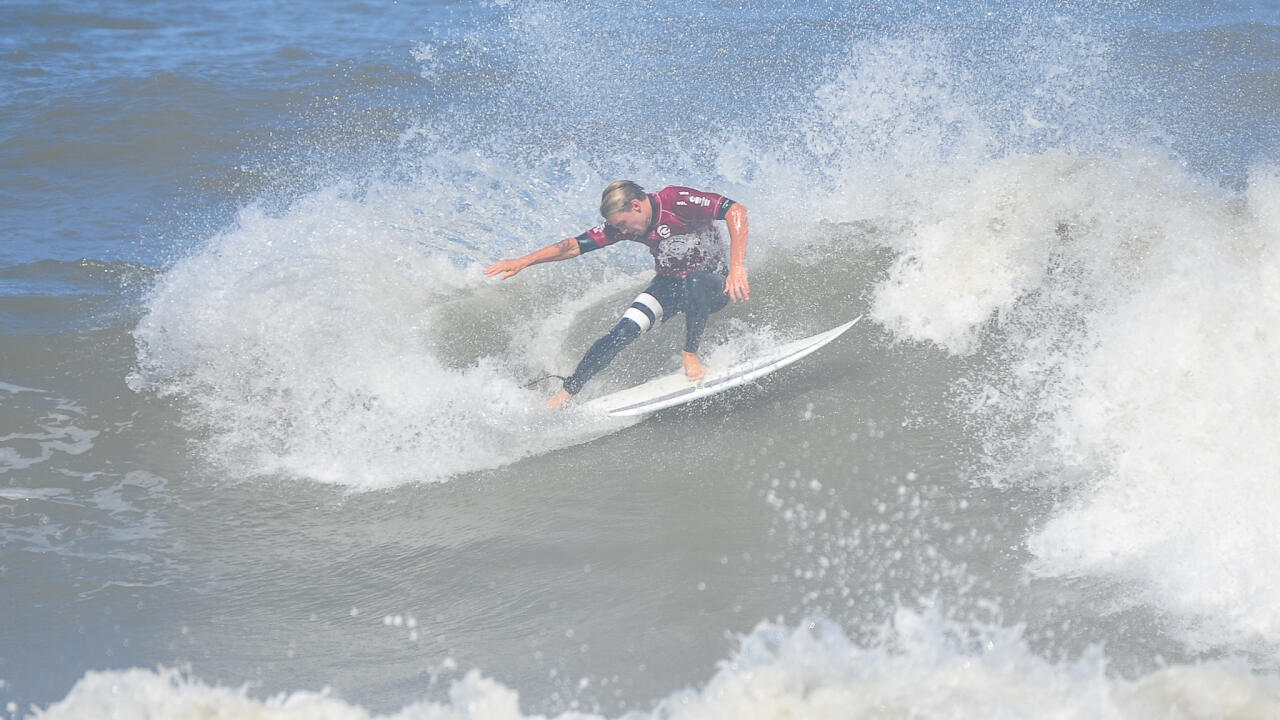 Round 2 was illuminated with near-perfect scores from the likes of now North America No. 3 Noah Schweizer in Heat 5 with a 9.07 and San Clemente's Jeremy Carter who gauged his way to a 9.03 in Heat 8 before former event runner-up Stevie Pittman dominated his Round 2 Heat 11 debut.

Pittman hails from just down the road and spent much of his young career competing at Jennette's Pier which showed brilliantly with a powerful forehand attack to earn an immaculate 17.60 heat total. The 20-year-old nearly didn't make it into the event dealing with ailments but couldn't resist a good swell.

"I wasn't really sure I was going to do the contest just being sick but the last few days I've been surfing a bunch and that heat was fun," Pittman said. "I don't really do too many airs and I saw a lot of guys getting some good scores on them, but I stuck to my strengths on the rail so I'm stoked it worked out. It's always good to surf at home and I have some good memories in the contest so I'm looking forward to the rest of it." Carter's dagger to air-reverse combination also put him into the nine-point club along with Pittman. - WSL / John Ferguson

Robbie McCormick Flirts With Perfection, Staying In The Moment McCormick is back in the Outer Banks with his focus on enjoying each heat. - WSL / John Ferguson

Robbie McCormick wasted no time finding near-perfection of his own with a 9.90 and 17.07 heat total to renew his vigor after an early exit last week. The 19-year-old debuted in similar, voracious form in much smaller conditions and knows the importance of not getting ahead of himself. McCormick had to deal with one of the competition due to fog that rolled in but kept his energy high and delivered a career-best performance.

"I saw a couple sections before we went on hold with the fog but I was just watching it and waiting for a good one so I was really happy to get one," McCormick said. "Coming from Virginia Beach I just had to regroup myself and prepare for the next heat. It's crazy we're only an hour and a half away and it's triple the size (laughs). I try to just freesurf in my heats and not think about actually being in a contest which worked out great in that one." An international field wasn't to be left out of the fun as Costa Rican duo Tomas King and Anthony Fillingim earned back-to-back heat wins in Round 2, after Fillingim already locked in a Round 1 heat victory. King hasn't had an ideal year so far in 2019 but returns to the East Coast once more in search of finding that spark alongside one of his good friends and compatriots Fillingim.

"I haven't really competed that much this year so it's great to be here with one of my best friends and we always have fun together," King said. "The waves are so good here and one heat win can change everything so we're stoked to get through after a disappointing run in Virginia Beach."

"We've just been surfing all day, that was my fourth session in that heat (laughs)," Fillingim said. "It helps keep the momentum going and we came here with a different mentality after Virginia to just have fun. That's what's keeping us alive and pushing forward." Defending event winner came out firing on all cylinders as he looks for back-to-back wins. - WSL / John Ferguson

Brasilian Renan Peres Pulga notched a momentum-building win to start his event title defense along with runner-up in their bout, 2016 event winner, Kilian Garland and their fellow WRV Outer Banks Pro victors Asher Nolan and Gabriel Farias who are all into Round 3.

Event organizers will reconvene at 7:30am to determine a possible 8:00am start for either men's Round 3 or women's Round 1.