The crowd at the event site went wild during the final day of competition at the 3rd stop of the 2019 Oi Pro Junior Series as Heitor Mueller (BRA) and Isabela Saldanha (BRA) earned victories in front of a captivated audience at Praia da Joaquina on the island of Florianópolis. Mueller, the 15-year old from Santa Catarina, used an array of aerial surfing to defeat 16-year old Raul Rios (PER) by a score of 15.30 to 13.15 which included an excellent 8.50 point ride by Mueller after blasting a tweaked-out reverse into the flats.

"I'm so overwhelmed right now and it's pretty unbelievable, but I landed that really good air and it's such a great feeling to have this crowd here cheering me on," said Mueller. "I'm so happy and I'm pretty speechless, but I've been training really hard with my Dad and we came to this event feeling confident, but it's still unexpected. Now I just want to celebrate!" exclaimed Mueller after being chaired-up to the winner's podium. The Men's Final was one of the most exciting heats of the entire weekend at Joaquina. Mueller decided to keep to the righthanders peeling along the inside section, focusing on his airs while Rios surfed the longer lefts - his best ride earning him a 7.25. But in the end, the airs made the difference, seeing Mueller win his first World Surf League Pro Junior contest.

Raul Rios showed a maximum effort in his performance which included two run arounds back up the point after finishing his rides way down the beach. "I never gave up and tried my hardest until the end. I was super focused, but there are some things that are out of your control and I'm still happy with my result" said Rios. "This was my first Final this year and I know that I have the ability to do it again, so I'll do my best at the next events. The last Pro Junior event of the year will be in Máncora (Peru), which is my hometown and a wave that I surf almost every day. So I'm going to give it my all to win one at home," concluded Rios.

Despite a small decrease in swell, Sunday was a picturesque day in Floripa with sunny skies, offshore winds and waves in the 2-3 foot range. While the lefts were longer and more drawn out, the rights were a little steeper once they reached the inside providing an end section with pop. The rankings were given a good reordering after leaders Daniel Templar (BRA) and Daniel Adisaka (BRA) were eliminated from the competition during the initial rounds. Mateus Sena (BRA) who had the opportunity to take the lead jumped into 2nd place, but was eliminated on Sunday. Local surfer Lucas Vicente (BRA) then overtook Sena leaving the Top-4 rankings as follows: 1st - Daniel Templar (2,440 points), 2nd - Lucas Vicente (2,310 pts), 3rd - Mateus Sena (2,220 pts), 4th - Daniel Adisaka (2,125 pts). Only the top three surfers on the WSL Latin America rankings will qualify for the World Junior Championships in Taiwan. "I feel a little frustrated because I didn't get a better result competing at home, but it's still a positive result since I moved up in the rankings," said Vicente. "This year isn't just about one event, so I've been happy with my consistency and look forward to the next event in Maresias which is a place I do well at. My goal is still to become the 2019 regional champion."

Similar to the Men's division, the Women also saw a shake up in the rankings upon completion of the Oi pro Junior Series in Florianópolis. Tainá Hinckel (BRA) continues her spot atop the rankings, but second place was up for grabs with both Sol Aguirre (PER) and Julia Duarte (BRA) in contention. As fate would have it, they matched up against each other in Heat 1 of the Round of 8 with Duarte advancing behind eventual runner-up Coco Cianciarulo (ARG). After taking down the ranking leaders, Coco Cianciarulo (ARG) came in as the favorite in the Final and got off to a quick lead. However, the ocean went through a lull and Saldanha caught the best wave of the heat with a 6.25 to win the contest by a score of 8.65 to 6.75 respectively. "I'm so happy that I won my first Pro Junior Final," said an ecstatic Saldanha, who is part of the Gabriel Medina Institute group of athletes. "I've been training really hard to reach this goal and now I know that all the hard work paid off. This is the most competitive Pro Junior circuit in the world and it's so important for the under-18 athletes to have a strong calendar of events. I'd like to thank Oi for all their support and I'm very excited for the next event which is in my hometown of Maresias."

Event runner-up Cianciarulo was still pleased with her result in Santa Catarina. 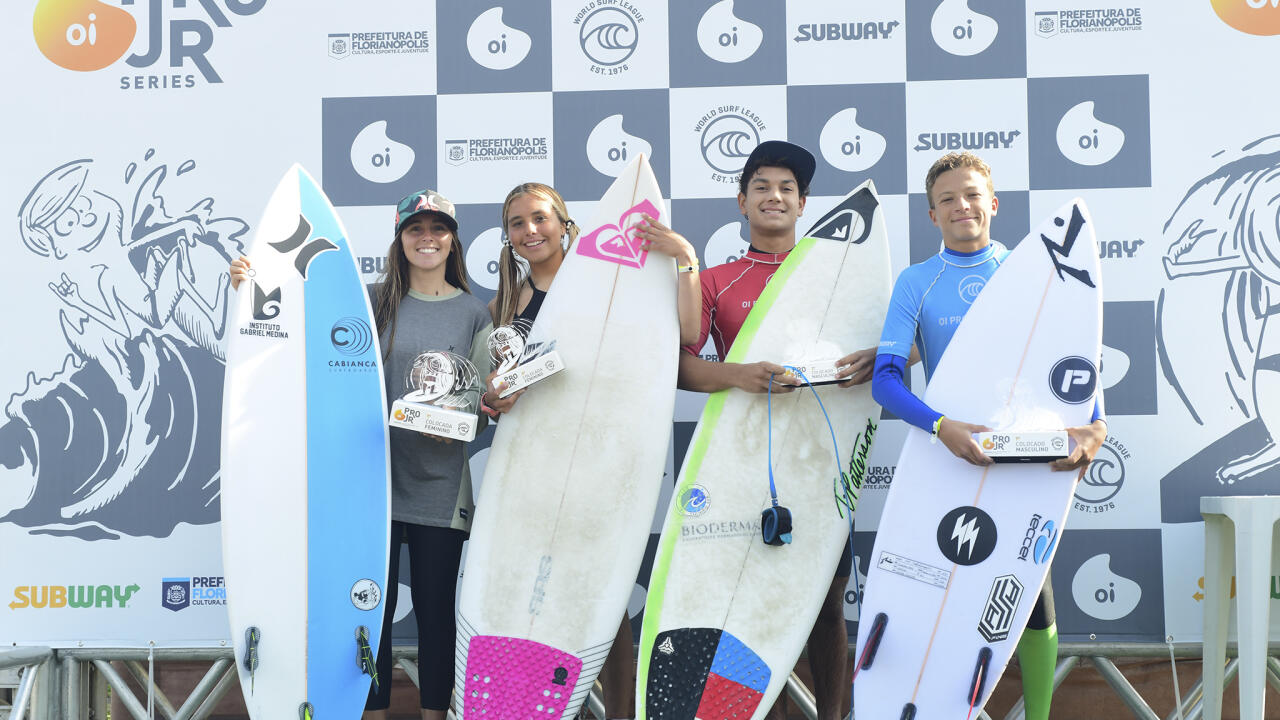 "Of course I would have liked to have won this contest, but Isabela surfed better and I got the chance to surf great waves this weekend topped off by making my first Final. I'm only 15-years old, so this was an amazing result for me and I'm happy with the way I surfed and competed. There are still two events left this year, so I'm going to do my best, but the most important part for me is having fun because that's when good results happen."

Surprise upsets shake up the rankings and leave the door open to clinch the regional Pro Junior title.