The women took to the classic beach break of Okuragahama Beach for the White Buffalo HYUGA Pro QS 3,000 for a full day of competition. Three-to-five foot swell offered plenty of scoring potential with some of the women's elite in attendance to put on a showcase of excellent surfing in Round 1 before men's Round 3 got underway.

Current QS No. 7 Alyssa Spencer and Tahitian Vahine Fierro stole the show with the day's top performances to display what the next generation has in store. Alyssa Spencer used her decimating forehand to lock in the day's highest single-wave score of a 8.93. - WSL / Kenta Kawana

Spencer has climbed the rankings this year with strong results at the top-rated QS events around the world, including a 9th place finish at the Vans US Open of Surfing QS 10,000. The Carlsbad, California, native already has a North America Pro Junior Regional Title under her belt in 2017 and is a qualification threat at just 16 years old. Spencer's lethal backhand easily took the heat win with a combined two-wave score of 15.10 (out of a possible 20) and advanced along with Ellie Brooks, who posted a 10.17.

"This wave is actually super tricky," Spencer said post-heat when asked how it compares to the breaks back home. "There are lots of waves breaking everywhere all the time, so it's hard to pick out those good ones from the lineup, but I got lucky and found two good ones." 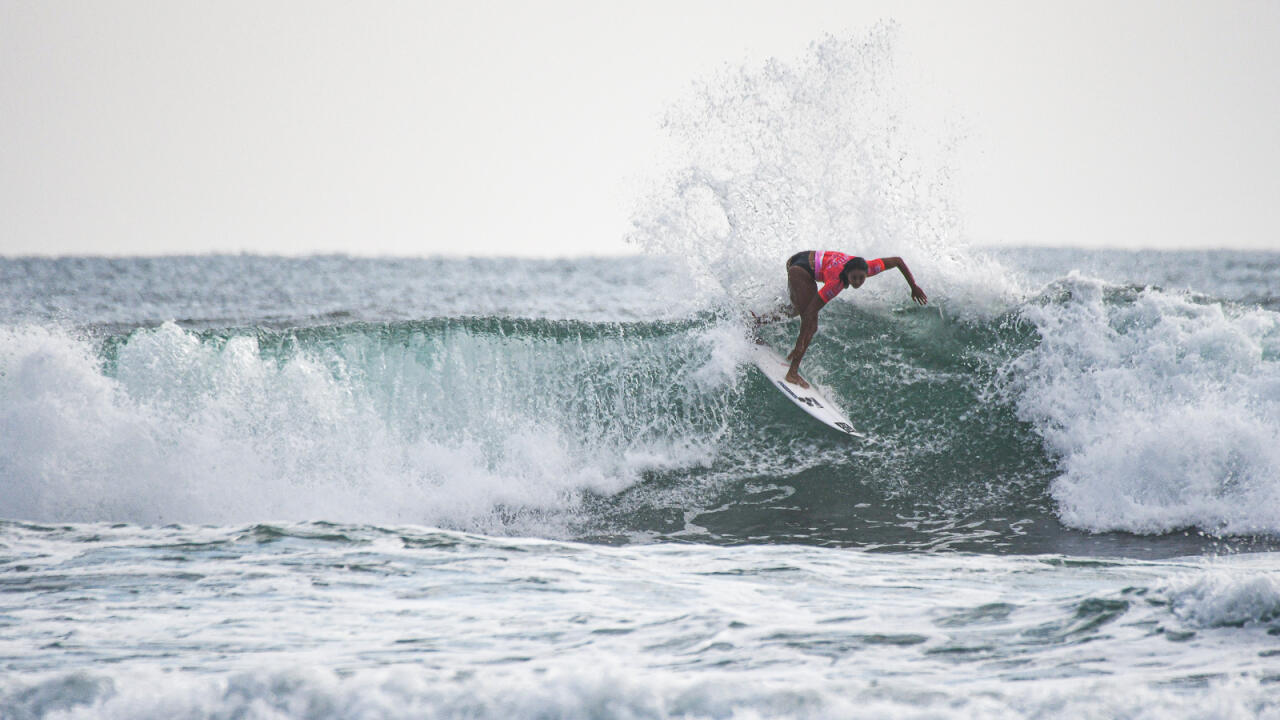 Fierro brought out a strong backhand attack all her own for the competition's best performance so far - a 17.17 heat total. - WSL / Kenta Kawana

Fierro debuted with an excellent heat total, earning an 8.67 (out of a possible 10) and 8.50 for the best heat total of the day. Hailing from the small island of Huahine in French Polynesia, Fierro has proven she can handle a variety of waves from shallow barreling reef breaks at home to the shifting beach breaks of Japan. Fierro's confidence translated well in the head high waves pouring into the lineup.

"The winds were really good," said Fierro post-heat. "The rights were super fun and I got into the rhythm and started getting waves after waves and I was super stoked it went my way. Round 1 always has a little nerves, always good to surf it off and make the heat. I was kind of nervous, but at the same time the waves were really fun so it made it easier."

Sitting No. 17 on the QS, Fierro recently made a big splash during the Roxy Pro France after she advanced ahead of World No. 1 Carissa Moore (HAW) in the first seeding round and ultimately left the competition in 9th place. The waves consistently rolled through the lineup as top QS athletes battled to increase their rankings and Barbados' Chelsea Tuach showed calculated wave selection, earning an excellent 8.43 and then holding onto priority for the last half of the heat. The former Championship Tour (CT) competitor looks to find her way back among the Top 17 after becoming Barbados' first-ever Tour representative for men or women.

"Its excellent surf today, we woke up and I got a clean surf before the competition started," said Tuach. "It's nice only having three girls in the lineup and 25 minutes. I feel like I made a few mistakes in the beginning of the heat and then slowed down to get some good ones. Looking forward to a good week."

Men Continue to Shine in Round 3 Action then shifted to men's Round 3 and the high-quality of surfing continued with great performances from up-and-coming QS threats as the winds turned offshore with continued three-to-five foot swell.

One of Japan's newest threats Shun Murakami displayed his brilliant style in fine form to garner an excellent 8.40 on his second attempt. Murakami's wave selection was key as he followed that with a 7.47 to seal a big Round 3 Heat 2 win and moves into Round 4 with plenty of momentum.

"The waves are super fun and I came in here with no pressure after getting a good result in the ISA World Games and want to bring that performance here," Murakami said. "I'm just enjoying my heat and I'll get to surf against my brother tomorrow which should be a really fun heat." Directly following Murakami's excellence, Ketut Agus found his scores on the rights that reminded the Indonesian of his home breaks. This marks Agus' second WSL event in three years after only competing in the Mentawai Rip Curl Pro in 2016 and is showing he's one to beat in the White Buffalo Hyuga Pro.

"I was just looking for the right one and go for a the bigger airs as well as a couple good turns," Agus said. "I enjoy staying in Japan so much. I'm really looking forward for more good surf in the next round and hope to keep doing well."

Event organizers will reconvene at 6:30am JST to determine if women's Round 2 or men's Round 4 will run.

The White Buffalo HYUGA Pro is an international WSL competition that features a Women's Qualifying Series (QS) 3,000 and an inaugural Men's QS 1,000, held between October 16 - 20. This marks the final event of the 2019 season for Japan until it becomes the focal point for international multi-sports during the Olympic Games Tokyo from July 24 - August 9, 2020. Tune into WorldSurfLeague.com to watch LIVE action, or download the FREE WSL app for in-the-pocket updates.