Men's Rounds 1 and 2 were completed in their entirety with top seeds making their debut in stunning form alongside local competitors putting on a show for their hometown crowd. The women's event was called off for today as event organizers deemed diminished scoring potential with high tide conditions.

Silvagni and McLean Slide Back Into Quarterfinals Tony Silvagniseparated himself from the pack on opening day with his signature style and flow to earn an excellent 8.00 (out of a possible 10) on his opening wave and 15.60 (out of a possible 20) heat total. The Carolina Beach, North Carolina, native, showcased his competitive expertise to debut among a formidable field in attendance at one of his favorite breaks in the world. Now the defending event champion moves right back into the two-man Quarterfinals alongside an in-form Parker Sawyer with plenty of momentum against John Angiulo.

"That was a great way to start a heat and conditions are just perfect - I love this place and this is probably the best waves I've surfed in a longboard event in a long time," said Silvagni. "All you need is two good waves out there and I knew I had three really good competitors in that heat so I had to be on the right waves. It can be a little bit difficult because you may get picky and know you just need a small score but choose the wrong wave and get out of rotation. It's fantastic to see the local, upcoming surfers like Zahid (Marrero) and next generation from my area Mack Landry doing well." Steven McLean looks for a maiden WSL victory this weekend and came out in great form. - WSL / Darren Muschett

Florida's Steven McLean took on the building conditions in Round 2 Heat 4 before competition was called off for the day and managed to showcase the surface of his capabilities in solid swell. McLean's experience this year has only helped his cause toward hopes of joining the world's best as a top seed in 2020 with the goal of making it to the World Longboard Championships. But first he must take on Puerto Rico's own top upcomer Zahid Marrero in Quarterfinal Heat 4.

"That first heat was good, the waves picked up substantially throughout it and you just had to find the ones in the mid-section," said McLean. "I came in this morning at 3am and right into this, it's one of the reason I love coming here. For me coming to an event early messes with my head a bit and I'd rather just come in and not think about it. Usually it's really easy here to do your thing but in that heat you just had to go for it and make it happen. This is a great opportunity to solidify a spot into next year's Longboard Tour and be more prepared for that."

Local Contenders Soto and Marrero Hold It Down On Home Soil The former Domes Beach resident Melvin Soto displayed his desire to impress the hometown crowd and did just that with a big Round 2 heat win. Soto, 31, came into this event not having made it past his debut heat in a WSL contest and overcame the likes of Angiulo while eliminating higher-seeded surfer Kevin Dewald and upcomer MacK Landry. Though his work is far from finished, Soto's form under pressure showed he looks ready to take on the challenge heading into the weekend.

"I'm excited after I did Spain and New York, and didn't pass my heat so I'm really happy to make my first heat here in front of my home crowd," said Soto. "Especially against a heat that had guys like Kevin (Dewald), John (Angiulo) and also Mack (Landry) was doing so good as well. I didn't expect anything coming into this event, you can't and now it's nice to know I'll be making a little bit of money. This year is my first year doing the WSL tour and after living here for a year I paddled out every day so I know this wave so well. When the horn went off and the crowd cheered my hair stood up, it was so amazing."

Marrero's, 15, buzzer-beater also earned him a place alongside Soto into the Quarterfinals as the only two remaining Puerto Ricans remaining. 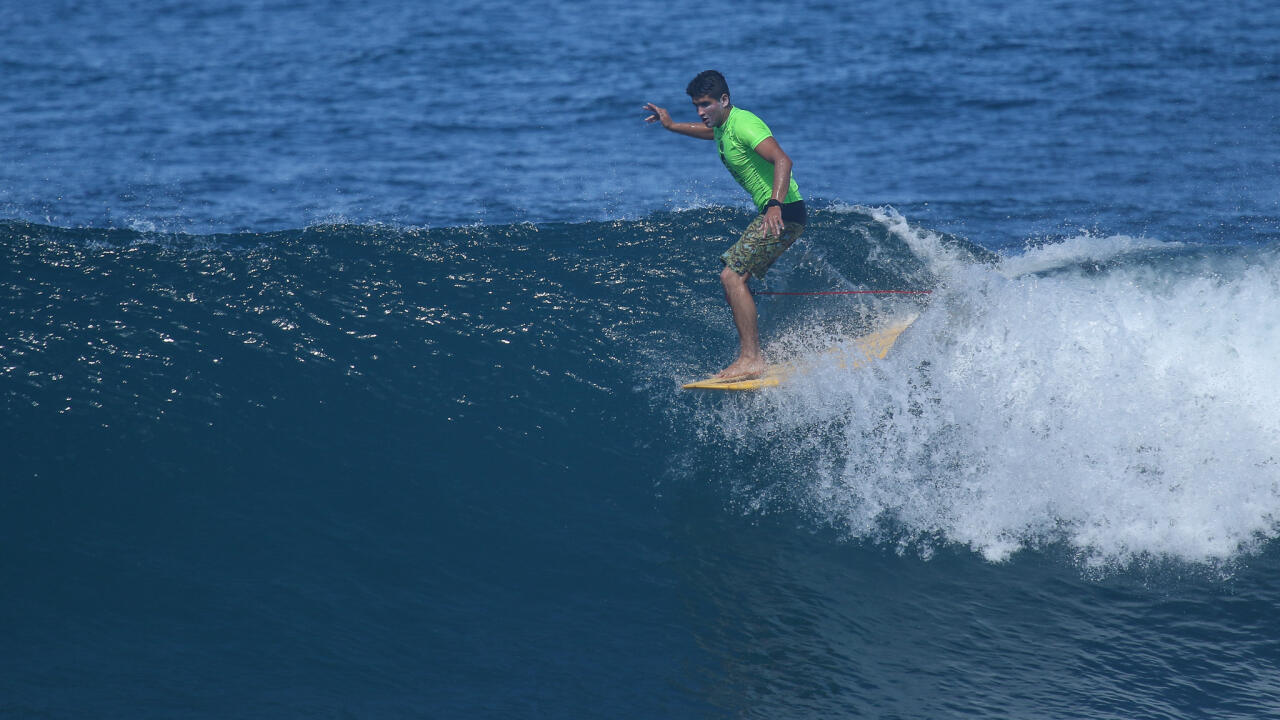 Chiliean Rafael Cortez wasn't to be left out of the fun and found some Domes gems in both his Round 1 and Round 2 heat wins. - WSL / Andrew Nichols

Chile's Rafael Cortez also earned a victory in his Round 2 heat and eased in Quarterfinal affairs alongside Trip Chandler.

Event organizers will convene at 7:00am AST to determine a possible start for either men's Quarterfinals or women's Round 1 action.