Puerto Rico closed another chapter of its competitive surf-rich history with the 2019 Rincon Surf Fest WSL North America Longboard Championships titles earned by Steven McLean and Maria Fernanda Reyes, respectively. The pair flowed their way through a stacked field of contenders in proper Domes conditions that eased off to dreamy two-to-four foot, clean walls on the final day of competition.

This marks McLean's first-ever WSL victory and North America Regional Longboard Title after a brilliant run through a stacked field of opponents that culminated against good friend Parker Sawyer. Reye's dominated her respective heats all the way through competition, never leaving doubt as she progressed through to earning back-to-back Rincon Surf Fest titles over WSL Longboard first-time competitor Callie Summerlin.

McLean's long-awaited goal of taking down a WSL competition was realized after putting on an exceptional display of riding the nose and keeping his style on some of the day's best waves. The Floridian took over the Final right away with a 12.83 (out of a possible 20) heat total with Sawyer just behind him by earning a 5.90 to stay within striking distance. But the Virginia Beach, Virginia, native couldn't catch McLean as time ran out and fell just short of taking down his long-time competitor.

"It's awesome to win one and feels like I've earned my place a little more now," said McLean. "Heading into that Final with Parker (Sawyer) kind of took the pressure off just surfing against one of my good friends and just having a good time out there. We've been competing against each other since we were 13 so that was cool. Before that having Rafael (Cortez) was tough and he had that bomb out the back so I'm glad things played out my way in the end." McLean's Semifinal win over Chilean Rafael Cortez set the tone for his day as he moved forward with big momentum that ultimately led to his maiden victory. Now the North America Regional Longboard Champ heads into 2020 with a seeding into the major LT events.

"It's perfect (claiming the North America Regional Title)," added McLean. "After having a bad event in New York I really want to do better there and I feel like I'm going to be more prepared this coming year. I also feel like I have a better understanding of the criteria which helps a lot and I think that's the biggest thing." Reyes could not be stopped once more and dominated her way into a second-consecutive WSL Rincon victory. - WSL / Darren Muschett

Reyes' form took control of the heat early on with a 10.90 heat total over first-time WSL Longboard competitor Summerlin who showcased her resilience throughout the event by overcoming a talented field. But The Peruvian's experience and flow was on full display once more as she finished with a 5.90 to secure back-to-back victories at Domes in phenomenal fashion. Now the 21-year-old will head back to her home country of Peru to prepare for a big year on next year's LT for a chance at chasing a maiden WSL Longboard Title.

"It is incredible to win this event and just super happy to be here and enjoying the beautiful waves," said Reyes. "I think being in love with this beautiful place makes me have a nice connection with it and I just wanted to give it my best. Now I will continue to train at home and return to competition next year ready to go. I'm really anxious to start now with a second win here and carry this momentum forward."

Reyes took down event dark horse Mary Schmader in great fashion, starting the Semifinal affair with a 6.00 and adding a 4.10 take control, heading into the final minutes. The Peruvian's 6.67 finish all but secured her place into consecutive Rincon Surf Fest Finals to continue her dominance over the Domes lineup. 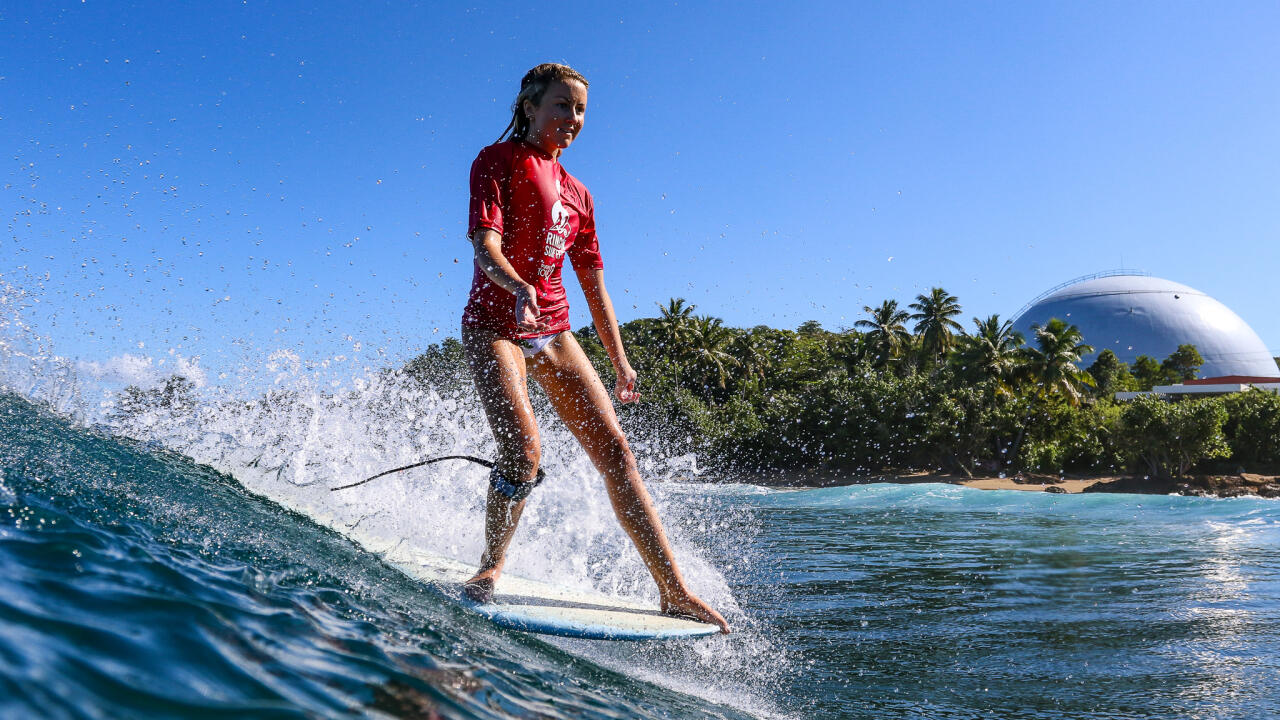 Summerlin's WSL debut stunned those in attendance as she powered her way to a maiden Final appearance. - WSL / Darren Muschett

A seesaw Semifinal battle of elegance ensued between East Coasters Summerlin and fellow WSL longboard first-timer Karson Lewis (USA). Eventual runner-up Summerlin's opening ride help keep Lewis within striking distance before Lewis' 4.43 overtook the 18-year-old heading into the final ten minutes. But Summerlin's final ride surpassed that of her opener and regained the lead in the dying minutes and helped push the Roanoke, Virgina, native into her first WSL Final.

The runner-up finish behind Reyes still earned Summerlin the North America Regional Longboard Title, representing as the only regional competitor in the Final, and a spot on the LT in 2020 as she joins the world's best.

"I'm so happy, that event was just so fun," said Summerlin. "I came here with no expectations other than to surf good waves and maybe do good surfing against these experienced people. There were so many amazing surfers here. Maria (Fernanda Reyes) is so good on the nose and doing big turns, and I saw her just going for it so I knew I would have to do the same. It's so cool (to win the North America title), I can't really believe it." A stout Semifinal clash unfolded with defending event champion Tony Silvagni taking on WSL longboard debut threat Sawyer. Early control by Sawyer looked to be in-form toward taking down Silvagni, but the seasoned LT veteran showcased his control and flow through critical sections to earn a 7.17 and establish his lead before the halfway mark. But, Sawyer's perseverance was undeniable as he answered back with a 7.63 of his own to reestablish his lead just moments later before a Final against long-time friend McLean.

"It was the best feeling in the world to make that Final, just after beating Tony (Silvagni) I felt like I already won," said Sawyer. "That was insane and the biggest part of the event for me. Making the Final was just icing on the cake surfing against Steve (McLean) and congratulations to him - it was well deserved and I've been surfing against him for a long time. I'm going to spend some time in Hawaii this winter and then head to Australia to try and get into that contest to start the year. Hopefully I can do a lot of the events."

The Rincon Surf Fest WSL North America Longboard Championships defending event champ is back for a shot at her repeat.