The Vans World Cup roared back to life after another fresh West swell filled in at Sunset Beach for the Men's QS 10,000 event and second gem of the Vans Triple Crown of Surfing. One of the most feared athletes in the draw, Jack Robinson, confirmed he belongs among the best by achieving the highest heat total of the event, a 16.07 in Round 2 Heat 9, in the clean 6-8ft. surf.

With powerful frontside surfing and stylish bottom turns, Robinson hammered an 8.67 for a power act and took the heat win from Charly Martin, who also advanced in second. After losing early in the first gem of the Vans Triple Crown - the Hawaiian Pro - Robinson hopes to put that result behind him and continue his journey to the 2020 CT with a massive victory at the big-wave venue. A true professional, Robinson is taking notes from his loss at Haleiwa.

"I just tried to simplify a little bit more," said Robinson. "I didn't surf too hard in that heat, just did what I had to do. The last contest was bad because I really didn't even catch a wave so I was like, ‘Let's just simplify and go out there and catch some waves.' I know I can get this. So yeah, just simplify and not think too much because that's when I surf my best." 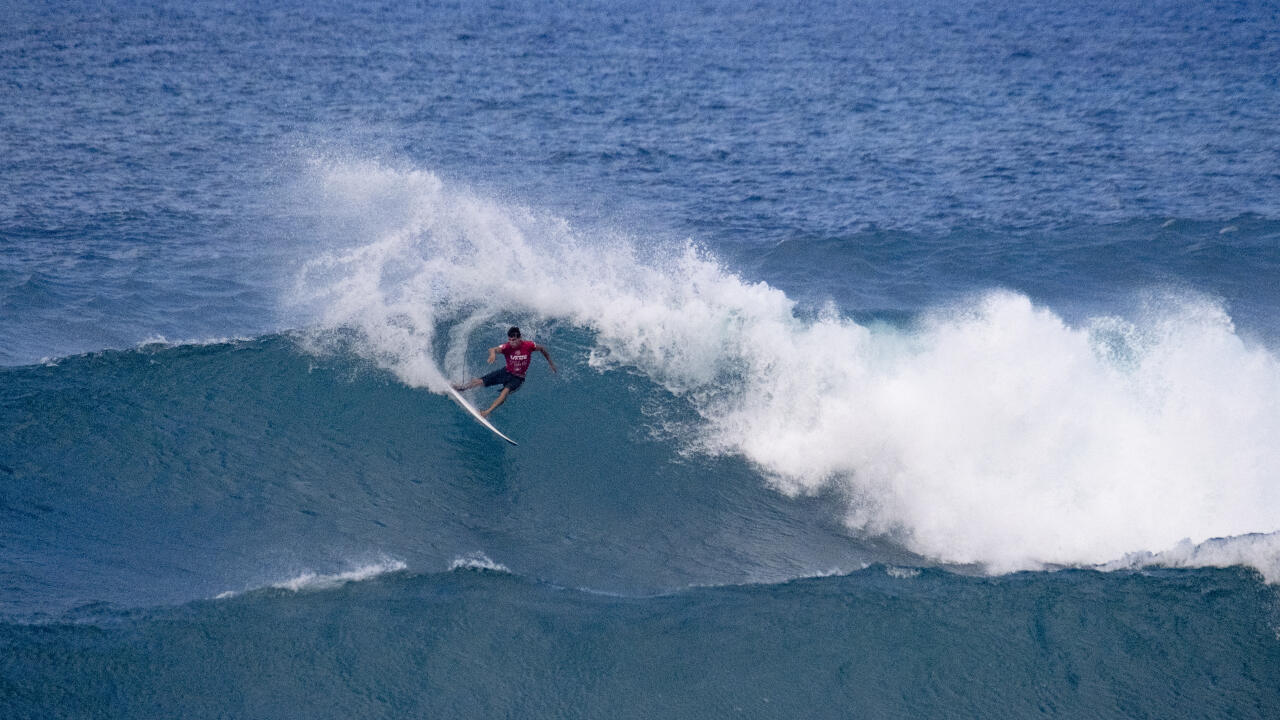 Robinson is no stranger to Sunset and looks to improve his QS rating for a last-ditch effort to qualify. - WSL / Keoki

Sitting No. 22 on the QS, Robinson would need a win to be at the 23,000 points cut off, which is the new unofficial benchmark for CT qualification. With a supernatural knack for big, powerful surf, thanks to growing up in Western Australia's Margaret River, this is not outside of the question for the confident surfer. With two wins at Sunset and four final appearances, Robinson is on a roll on the North Shore after a victory earlier this year at the Volcom Pipe Pro.

Heavy upsets peppered the competition as top QS contenders fell out of the draw, their qualification hopes wrecked for 2020. Jake Marshall entered the event in the No. 9 position on the QS but fell victim to a freak wave-starved Heat 3 that saw him tally only one ride, a 4.00. Hawaiian Joshua Moniz also missed out on advancement in Heat 3 while Sunset champion Billy Kemper and alternate Joaquin Del Castillo earned the nod into the next round. Marshall bows out of the Vans World Cup and will return to the QS hungrier than ever in 2020. - WSL / Keoki Saguibo

Jorgann Couzinet performed well under pressure and committed to the peak after paddling into position to earn a 7.50 and 6.83 for the heat win. The Frenchman sits in the No. 11 spot on the QS and has had this matchup on his mind for weeks, especially since he didn't get the result he was hoping for at the Vans Pro Men's QS 3,000 last month (49th).

"You don't even know how much I was thinking about this heat for those last few days," said Couzinet. "I was like, ‘Oh God, I don't want to lose again straight away.' Because I did at the Vans Pro, I lost needing a 2.6. I did at Haleiwa, I lost needing a 5.6, and this one I'm making heats so hopefully I'm starting some momentum."

After coming agonizingly close to qualification in 2018, Couzinet arrived early to Hawaii to warm up for the season. During a solid west swell in October, he was caught between the West Peak at Sunset and the Boneyard section further north on a freesurf session and came close to drowning after a two-wave hold-down. Couzinet in the safety zone after earning a Round 2 win. - WSL / Tony Heff

"I was playing with the lineup trying to go a little bit deeper, trying to catch the biggest one and since the wipeout, I've been slowing down," Couzinet continued. "Taking more care because it's super dangerous out there, it's moving so much. It's definitely not a wave you can play with so I'm thankful to be alive."

Imaikalani deVault dropped one of the best scores of the morning, a 7.33 for two strong turns and a critical end-section finish in Round 2 Heat 4. However, in the dying minutes of the heat deVault found himself sitting in fourth position needing only a 2-point ride to advance, which tested his nerves and competitive prowess. He paced the lineup and finally, with priority, paddled into a wave and forged two committed snaps and another critical finish that judges recognized with a 4.20. The score moved him into first advancing position, but heavy-weight McGill pulled ahead with an excellent 8.00; both advanced into Round 3.

"I'm not going to lie I was pretty nervous," said deVault. "I've lost a few heats needing real small score like that out here. I kind of started pacing but Ross, my caddy, was like, ‘You only need a 2, don't stress.' I was confident that when the wave came I would perform on it. I was more nervous thinking, ‘what if I don't get the wave.'" deVault flipped the heat to move onto Round 3 where he will match up with Conner Coffin (USA), Jesse Mendes (BRA) and Billy Kemper (HAW) in Heat 3. - WSL / Keoki Saguibo

The regular-footer from Maui is on the hunt for his first professional win and although qualification is out of the question this year, he will end 2019 with his best ranking yet, which only stokes the competitive fire.

"To win a 10,000, in general, is a dream, but to win at home is definitely every Hawaiian's, one of their main goals, since competing as a kid," deVault continued. "It would be a dream come true honestly. I don't think I'm even in a position now to qualify but just to get the win and get a really good seed for next year is definitely my goal. I have yet to get a quarters or anything out here so I just want to focus on that."

Costa Rican QS veteran Carlos Munoz has been covertly collecting heat wins over the course of his professional surf career. However, even an experienced competitor still feels the nervous energy as they come face to face with the chance of securing their dream of CT qualification.

"It's the first time I feel this pressure my whole career," explained Munoz. "I was a little nervous because this is the last event of the year but I put it together and I got two fun waves. I've been surfing this wave a lot because I know if you want to make the CT you need to be good in this last one." True to form, Sunset Beach plays no favorites and has a way of making and crushing dreams all within the same set of waves. Painfully close to qualification at No. 12 on the QS, Samuel Pupo fell victim to the elements and couldn't secure advancement out of his Round 2 heat after scoring a two-wave total of 9.40, just .20 points behind fellow Brazillian Alejo Muniz. A nail biter of a heat, multiple waves were ridden at the very end, which kept athletes waiting on the sand for results. With priority during the final sets of the heat, Samuel caught a wave with less than 30 seconds left but fell on his last turn at Vals Reef and came just short of the score needed to advance.

The drama continued throughout the last heat of the day as former CT athlete Nat Young surfed for his career and earned an 11.97 combined heat total with his venomous backhand. The Santa Cruz, California native needs a first or second place to be at the unofficial points cut-off for the 2020 CT and sitting at No. 18 on the QS, this would be a massive, albeit obtainable, leap. Separating himself from the pack, Young had a heavy punch that earned him a 6.07 and 5.90 to move into first, proving why he belongs on the CT and moving one step closer to qualification with radical fin blasts through the lip. Young was a beat above the rest as he unloaded big turns for the heat win. - WSL / Heff

2018 Vans Triple Crown Rookie Weslley Dantas also went hard on his backhand for a 6.50 and 4.67 and advanced safely behind Young as he held onto priority at the end of the heat. The Brazilian's powerful style is well-suited along the North Shore, which he demonstrated last year with a 7th place finish in the Vans World CupVans World Cup and 3rd in the Volcom Pipe ProVolcom Pipe Pro.

It was the Jack Robinson show on Finals Day at the Vans World Cup, with the Australian securing the win and a 2020 CT spot.

Jack Robinson is welcomed to the 2020 Championship Tour after earning the highest-scoring heat total in a Vans World Cup Final.