Behind every great surfer is a great shaper. And while they're not in the limelight like your favorite Championship Tour star, their work has done a lot to progress the sport to the stage it's at today.

That's why we're checking in with the most renowned craftspeople in surfing -- the masterminds helping the world's best surfers take their game to the next level. This is a full-body check up on the state of high-performance surfboard design in 2021.

Over the coming weeks, we'll talk to Jon Pyzel, Marcio "Sharpeye" Zouvi, Jason "JS" Stevenson, Darren Handley, and Britt Merrick, to name just a few of the shapers. But first cab off the rank is Matt Biolos.

Biolos started Lost Surfboards in the early 1990s and has been crafting his Mayhem-branded boards for the world's top surfers for over 30 years. His current team riders include CT surfers Kolohe Andino, Griffin Colapinto, Yago Dora, Carissa Moore and Caroline Marks. Kolohe Andino with a stealthy step-up on the North Shore this winter. - Lost Surfboards

WSL: Hi Matt, how different are the boards you make for each of your team riders?
Matt Biolos: As the waves get bigger the boards get more and similar for the riders. The smaller, performance boards are more varied for the different lines and approaches of each surfer. Kolohe likes a wider tail, as he pivots off the back foot, so we have been adding elements to make sure that the tail stays in the water. Griffin likes a narrower, knifier tail that is more whippy. There's a five-year gap in their age and so there is a difference in the way they flare in their surfing.

How else do they differ?
I think the biggest variance now comes not so much with the riders, but the location. We are making boards that are much more specific for the different CT locations and so they are really diverse.

Can you give us some examples?
The Pipe boards are really Pipe, the Sunset boards only work at Sunset and we are even making Haleiwa models. I was talking to Griff yesterday and he's been using the Sabo Taj model for Sunset; thicker, wider and shorter with pulled in tails. The feedback was that they were amazing at Sunset, but for Haleiwa they were a bit corky and didn't fit the kink of the wave there. The boards are becoming super-specialized between spot to spot rather than surfer to surfer. 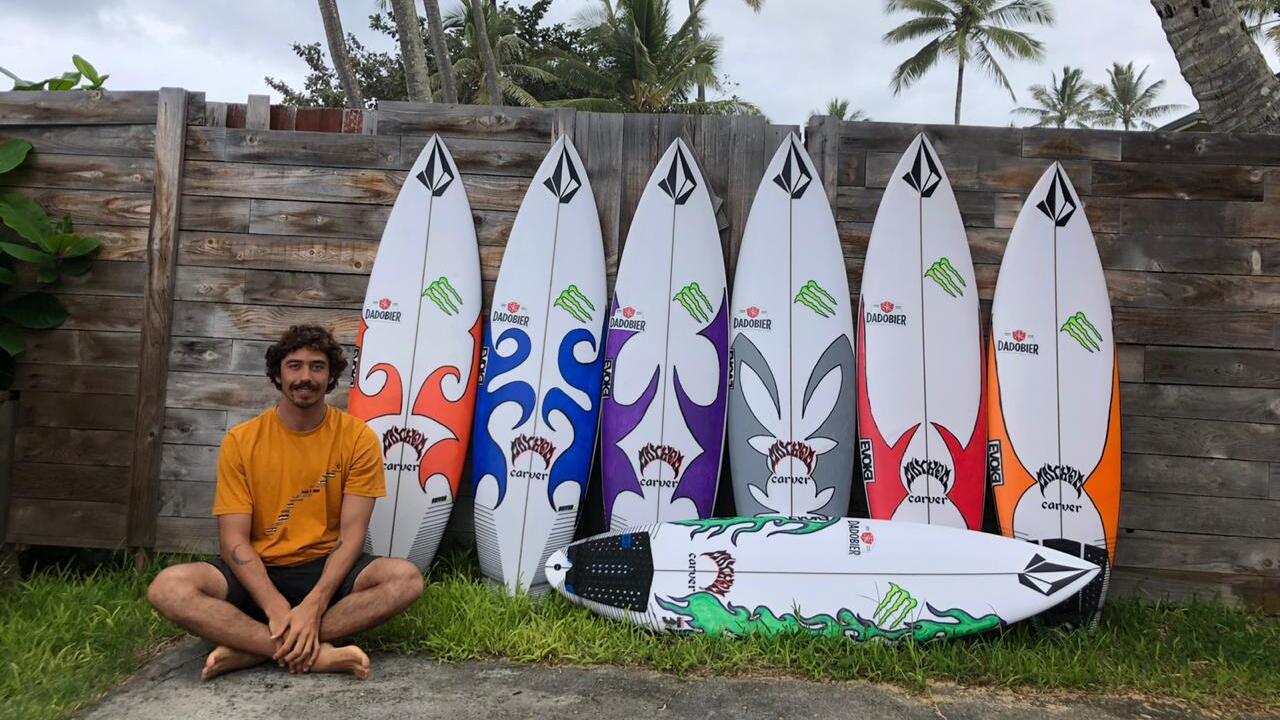 Yago Dora all smiles with his Hawaii quiver from Mayhem. - WSL / Lost Surfboards

Speaking of Griff, his performances in Hawaii have been incredible. How do you adjust when a surfer is continually raising the bar?
I'm trying to talk to Griff every few days or every bump of swell. Right now I'm whipping up some boards with thinner rails. We went thick for Sunset, so 2 and 5/8" on his 6'2". He asked how he could hold his rails for deeper and longer through the turns the same way John John is doing.

That's his current benchmark?
We've been trying to isolate if there is anyone that can do those turns better than Griff. He said, "I can't do that turn that John is doing and I want to get a few new turns in my repertoire." So we came to the conclusion that if we shave the rails down and with the events canceled he can work on those turns. The goal is to have the boards that will translate to Bells and Margarets. Yet he's progressing that fast we are adjusting batch to batch.

How has the lack of competition, both last year and now, affected that process?
Well, with Carissa she's still surfing all the Triple Crown spots and I said, "Look, the contests are off, but I'll still do my job and if you want to get the boards perfect, then let's keep working, keep fine-tuning."

Given you and the surfers are still doing the work, do you think the lack of competition will help or hinder the performance levels?
I'm pragmatic enough to know that competitive surfing has driven performance over the last 40 years, but I think, without getting all hippy, that personal growth and better surfing can be achieved in these times. The biggest leaps and bounds have occurred under the microscope of competition, but now we are taking a longer view and adjusting. The aim now is to create boards for the riders to achieve success for Bells and Margarets.

And personally, what part of the shaping process has kept you exciting. What's floating your boat?
I was most excited in the last year working with Mason. To be building an incredible diverse quiver of boards that he could go out and paint Salvador Dalis with was a total sidebar bonus to my career and design life. He'll ask for a bunch of 4'8"s for Off The Wall, or some 1990s guns for Pipe. Then he'll paint pictures and draw new lines and then rip out a new edit. I really think he was the 2020 World Champ. It's so fun, and he challenges me, but it's not about points or trying to beat Julian Wilson in a heat. He really is showing the best of what surfing can be.