By her mid-30s, Silvia Nabuco was already an accomplished professional athlete. A powerhouse of running, biking, and swimming, the award-winning triathlete and professional cyclist had even been a runner-up for Olympic windsurfing. She spent what little free time she had diving and sailing.

But a surfer, she was not.

By 36, the Brazilian had begun to step away from the sports spotlight. Little did she know, her competitive days were still far from over. In a twist of fate that would surprise even Nabuco herself, the Sao Paulo native's future would come to include several of the most prestigious markers of a professional career in big wave surfing; Nabuco would go on to earn a coveted position to surf the 2019 Eddie Aikau Invitational, opportunities to compete in 2019's RedBull Queen of the Bay, 2020 RedBull Magnitude contest, becoming a regular on the big wave women's circuit. As a prosurfer, Nabuco would easily slip into the life for which so many strive.

But at 36, Nabuco hadn't seen it coming. She couldn't have anticipated yet another athletic career -- especially one in surfing -- a sport she hadn't even tried. 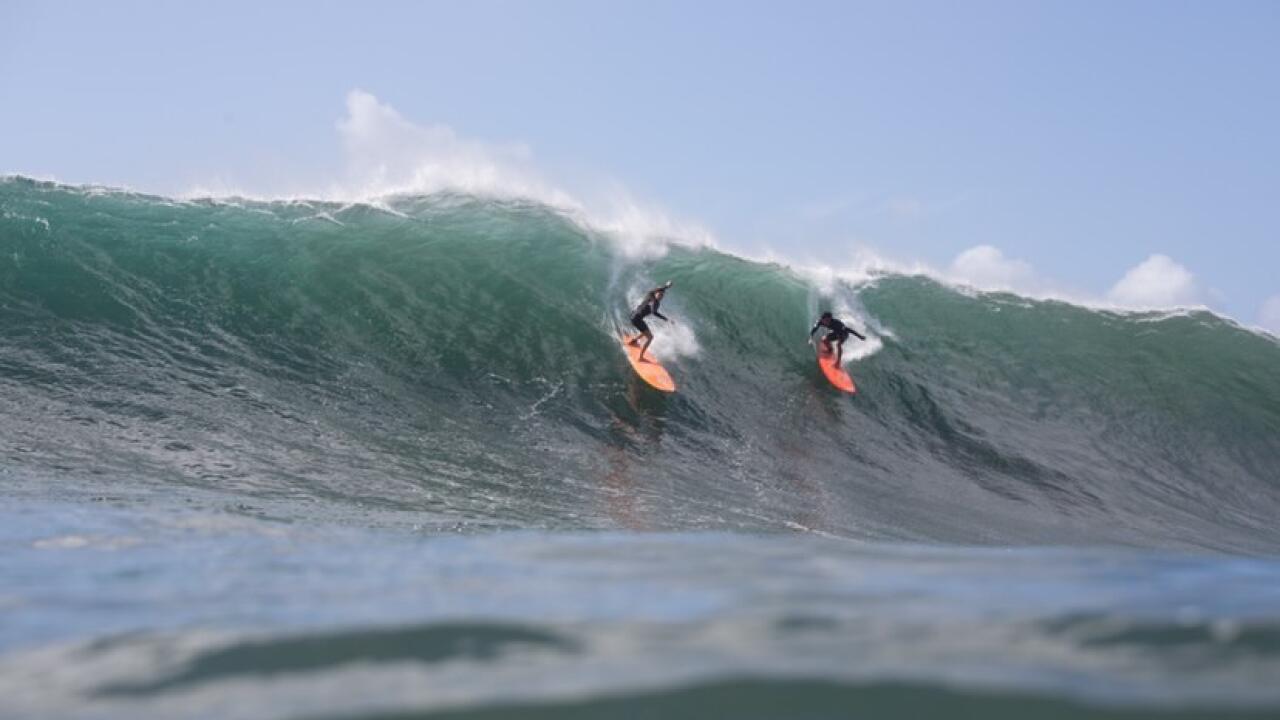 From triathalete to charger, Silvia Nabuco was late to surfing but certainly isn't afraid when the buoys are up. - Matt Paul

Creeping up on 40, an age still considered youthful by most, but near-ancient in competitive sports years, Nabuco had reached the point at which most athletes begin slowing down a bit.

"I was going through a period of stress - the opposite of [starting down a new path]," admitted Nabuco, now 55. "I never thought about doing another sports career so late in life. I just wanted to have fun."

In an attempt to de-stress, Nabuco was doing just that; As she splashed around in the tropical waters of Brazil's coast, a friend offered to lend Nabuco a surfboard causally encouraging her to give this surfing thing a try. The moment changed Nabuco's life forever.

"I always saw my friends surfing but I couldn't try it because it would ruin my swim stroke," Nabuco explained. But with her competitive swim days behind her, Nabuco agreed, "I tried her board and I fell in love with surfing." Every weekend Nabuco would do the long commute to the beach to spend her weekends surfing. Catching waves came naturally to Nabuco, whose upbringing revolved heavily around the ocean, and she quickly progressed. "I was catching 6-foot waves in the first three months!" she recalled of that time.

Still, Nabuco pushed herself with each wave she caught.

"I remember this 6-to-8-foot swell where I was paddling by myself at a beach break. People were telling me that I wouldn't make it," she said.

The hesitation of her spectators didn't stop her. The self-confidence and physical drive that led her to wins in other sports took over. Nabuco was driven by doubt, striving to push through, get better, work harder - not for others, but for her inner self. "I have always liked to overcome myself. When it comes to surfing, I feel even more passion because of the elements and challenges of surfing big waves."

In 2004, after just a year and a half of experience, Nabuco found herself Hawaii-bound, embarking on a pilgrimage made by throngs of surfers before her: she was headed to the legendary winter waves of the North Shore. "It was the beginning of a passion for big waves and all the adventures that were to come," said Nabuco.

The trip amplified her dedication. She continued surfing waves across the globe and soon the goofy-footer was getting noticed. Her eye-catching talent coupled with her relative anonymity was soon the topic of conversation and would eventually propel Nabuco into the elite echelons of big wave surfers. By 2016, she was joining the ranks of Keala Kennelly, Emily Erickson, Paige Alms, Laura Enever, and other seasoned competitors. She surfed in both the 2016 and 2018 Women's Big Wave Tour contests and finished in the top ten at the 2018 Maui Pro Peahi Challenge. 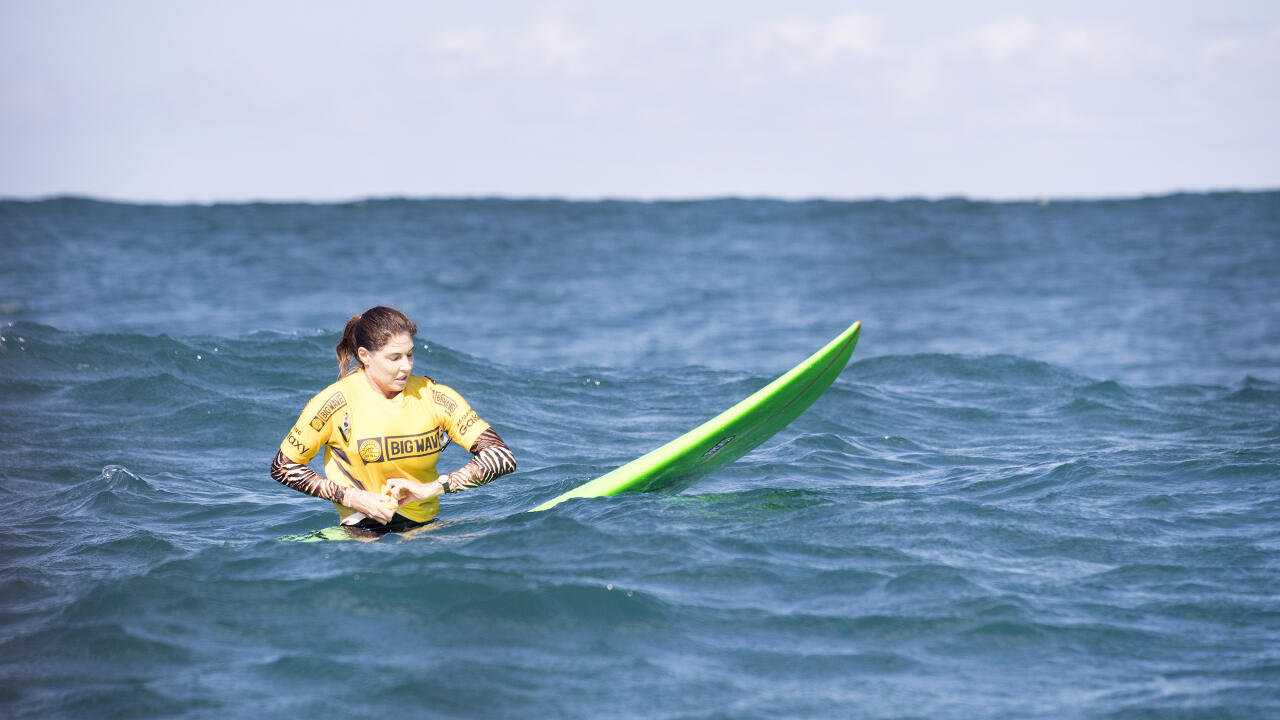 Silvia Nabuco sussing the lineup at the Jaws Peahi Challenge in 2016 on Maui. - WSL / Kelly Cestari

Though surrounded by youth, Nabuco has remained in great shape, training and staying fit with regular workout routines and healthy habits -- a carryover from her past athletic life. The triathlete-turned cyclist-turned-windsurfer-turned-big-wave-rider says that time and the wisdom it brings gives her an edge when it comes to competing: "Physically I don't feel that different, but I feel wiser as I get older and I use this in my favor. I have better focus, knowledge, ability to read waves, better strategy on big day choices, confidence, choice of equipment, and so on."

Despite her age, there will be no stopping this female force anytime soon. When asked who she looks up to, her response is telling: "Kelly Slater. He is the king of reinventing himself. He's versatile in both his surf and his lifestyle."

Nabuco also sees a bit of herself in another famous name known for his multifaceted athleticism -- Kai Lenny. "I respect his ability in all kinds of waves and water sports and I respect his bold personality."

Like Lenny, Nabuco, too, is evolving. She thrives off the aspects of self-challenge the independence of the sport provides. Her dedication is clear. "When you like what it is you do, you don't feel that you are sacrificing." As for goals or future professional ‘musts', the female force looks back to the start of this newest chapter of life as a surfer, saying, "My goal is to have new experiences, adventures, and surf trips to new spots with my friends."