Conner Coffin is not an air guy. Born and raised on the famed point break of Rincon in Santa Barbara, Coffin is best known for his carving, power, and vertical surfing.

Taking cues from the patented approach that Californian godfathers Matt Archbold, Brad Gerlach and Taylor Knox executed to great effect, Coffin has a chance to become the first male surfer from California to win a World Title since Tom Curren back in 1990 -- another surfer who knows how to lean into his rail and is one of Coffin's longtime heroes.

Knox stormed the CT as part of the vanguard Momentum Generation spending two decades on the ASP World Tour before retiring in 2013 and believes that laying it on rail and hacking away at the lip will never go out of style. 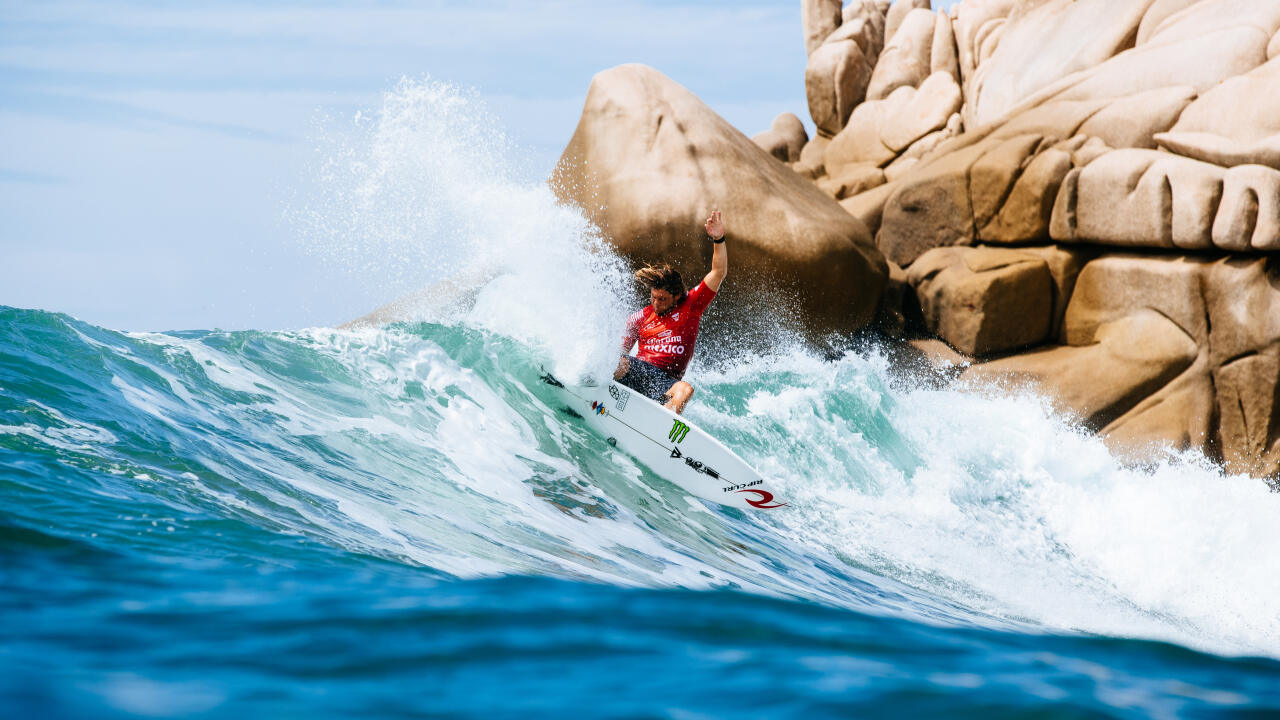 "For me what I like about Conner is I think he started off as a throwback rail, speed power surfer. Which, you know, if there wasn't that on Tour, then what would the Tour be?" Knox told the WSL. "That's the foundation of our sport dating way back. And if you have speed, power [and] flow style, I just don't think you're ever gonna be phased out."

"He has a really great layback tail blow. He did one of those in Mexico really sick," Knox continues. "That's become a really good signature powerful move because it stands out. I still think that great style really just stands out on tour."

Coffin's best results this season came in Australia. Runner-up at Narrabeen against a high-flying Gabriel Medina, the Californian's year was already off to a flying start after a fifth-place finish in Newcastle. He carried that form into Rottnest with another Quarterfinal appearance keeping him in the hunt for a world title.

Then at Barra De La Cruz, Mexico, the last event of the season, he rocketed up four places on the rankings and into the Top Five to book his spot at the Rip Curl WSL Finals and a shot at the World Title at Trestles in September. The sort of surfing which never goes out of style. - WSL / Matt Dunbar

The last contest Coffin won was the 2017 Vans World Cup Of Surfing at Sunset Beach, a Qualifying Series event. The win proved he is also formidable in heavy conditions having put the time in on the North Shore as a regular at Pipeline and has spent time in Fiji sharpening his act at Cloudbreak while working as a boat driver on Tavarua.

At 28 years of age, win or lose, the Californian still has plenty of time on his side according to Knox, who has traveled with Coffin to J-Bay and surfed with him at Lowers extensively. He's impressed by his focus and how he works to his strengths.

"I really like that he's a student of the game," Knox says. "He probably knows he's not the best aerialist in the in the world -- I feel like he's a realist. But you know, he is bringing something to the Tour that not a lot of guys are bringing which is that he's a lead foot -- he's a rail surfer. I have no doubt the guy is gonna get better. You know, I still think there's more in him."

The invigorated Californian left long-time sponsor Channel Islands to ride for JS surfboards in 2020 and the extra spark has not gone unnoticed. Coffin's decision was based on riding one of Ace Buchan's boards at J-Bay in 2019, which he clicked with instantly, forcing him to make one of the biggest decisions of his life.

"A lot of times, it's hard to make those kind of moves," says Knox, also a former Channel Islands team rider. "It just shows that he, he felt like he needed something different under his feet. And it's paying off. You know, those are big decisions, and sometimes in careers, people don't have the guts to make decisions like that."

Knox firmly believes that the format for the World Title to be decided in a one-day playoff offers a huge opportunity for surfers like Coffin and Morgan Cibilic, who are considered underdogs overshadowed by the Brazilian trio of No. 1 seed Medina, Italo Ferreira and Filipe Toledo, who have all had CT victories to their names this season.

"I mean, it's gonna be trippy, you know. Because, I mean, Morgan could be World Champ the first year -- anything could happen on that last day, which is kind of cool," Knox surmises. "These guys are going to go crazy at Lowers, they're all so good there. It's gonna be rad to see I hope we get a nice strong swell for it."