In one of those simple twists of fate that only the magic of Malibu seems to be able to conjure, 45-year-old Joel Tudor and 22-year-old Honolua Blomfield have become the oldest and youngest three-time World Longboard Champions in history.

Throughout a marathon day of surfing at the Jeep® Malibu Classic presented by Havaianas, Tudor slowly built momentum towards this Title moment. After winning the Noosa Longboard Open back in February 2020 -- and putting surf fans on notice that he was in the hunt for his third Title -- eighteen months later he's made good on his word. At 45, he not only won the 2021 Title, but also took out the Malibu event and continues to set the standard when it comes to classic longboarding. He's the oldest World Champion ever, not to mention oldest three-time World Champ.

"The most proud thing of all of this is that I finally beat Kelly at something. So remember that," Tudor joked of another multi-World Champion while celebrating his win. Meanwhile, at the other end of the generational spectrum, Blomfield has become the youngest three-time World Longboard Champion in league history. After a dominant win at the Cuervo Surf Ranch Classic and a runner-up finish at the Jeep® Malibu Classic presented by Havaianas, she is at the top of her game at the moment and the back-to-back champ after claiming the 2019 Title as well.

"I feel amazing, I really didn't expect this to happen," said the 22-year-old Blomfield immediately after winning the Title. "I am so grateful and thankful it did, it feels amazing to be the youngest three-time World Longboard Champion."

Meanwhile, France's Alice Lemoigne took the event win over Blomfield, after fighting her way back from the Elimination Round on Day 1 to become one of the most in-form surfers of the event. Lemoigne was dominant throughout the final, putting Blomfield in a combo position requiring a 9.9 -- jusy shy of a perfect score -- to take the lead. 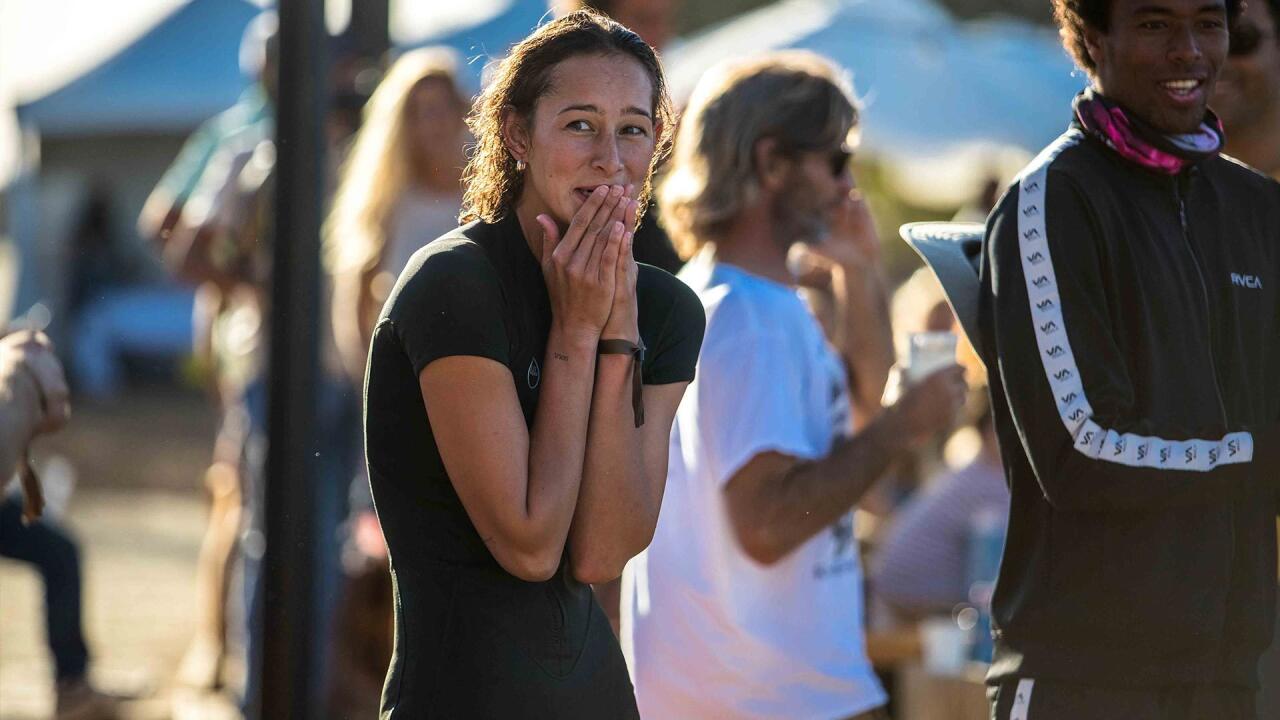 When Tudor paddled out for his Semifinal against Tony Silvagni, he would have known he would become the World Champion if he won; Harrison Roach, the other contender, had just bowed out.

But if he was feeling any pressure, he didn't let it show. He took his time, and when he did eventually catch a wave it was a text book performance with critical noserides, switch-stance cutbacks and the style and poise he's famous for.

At 45 years old, Tudor was proving he was still setting the benchmark when it comes to longboarding. His last World Title came all the way back in 2004, and his first in 1998. 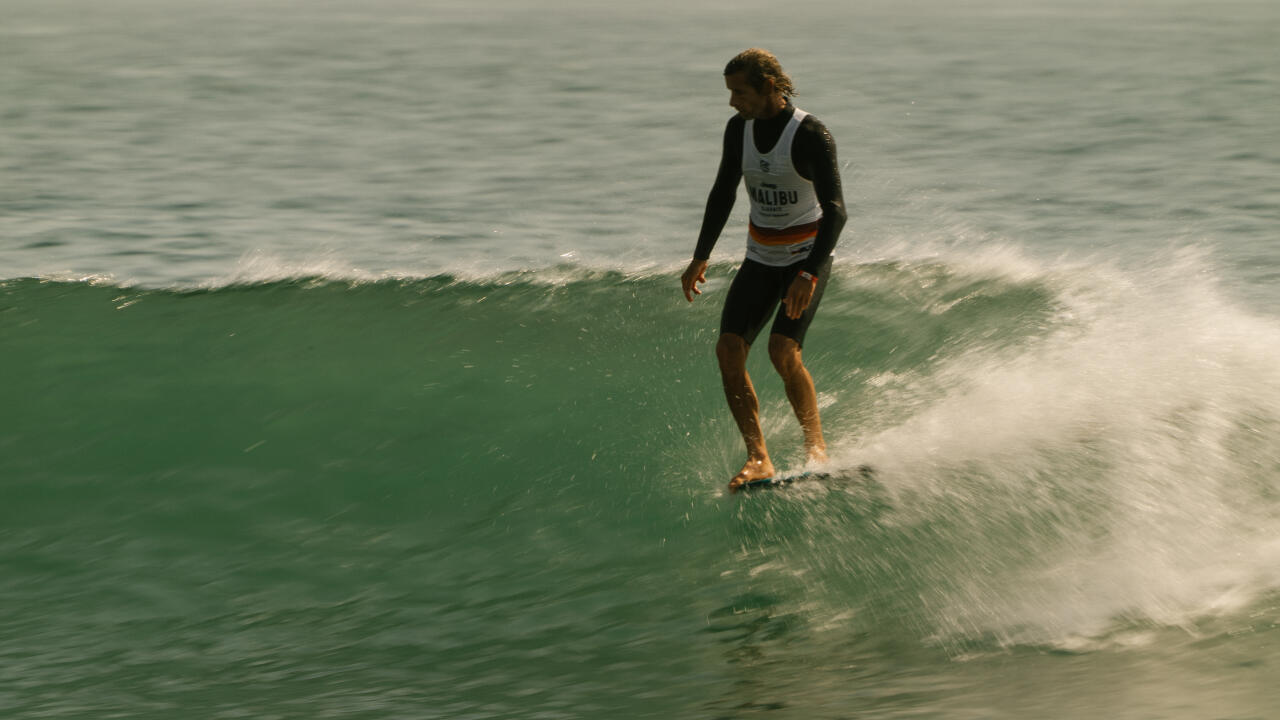 There were some nervous moments as Silvagni was still in with a real shot at taking the heat win right down to the final moments after a slow period in the ocean, but once the buzzer sounded, Tudor was the World Champion, and that's when the ultra-cool veneer began to melt under the Malibu sun. The excitement was obvious, as Tudor's family and a legion of athletes his surfing has inspired rushed down the beach to congratulate him.

"This was for Donald Takayama," Tudor said after claiming his third title. "I said it to Kai right before I paddled out. He kind of mentored my whole existence, I wouldn't be here where I am today if it wasn't for him."

"When you're a dad, you don't really talk about your accomplishments with your kids, especially when it's prior to their existence. It's nice that they got to see their dad do something cool." At the conclusion of her Quarterfinal against Lindsay Steinriede, Honolua Blomfield became the youngest three-time World Longboard Champion in league history.

Blomfield, at just 22 years old, shot up the rankings after a win at the Cuervo Surf Ranch Classic last month.

With a fifth-place from Noosa back in 2019, which counted towards the 2021 season, by the Quarterfinals she had done enough to claim the title. As defending 2019 World Champion, this was also back-to-back titles for Blomfield.

"I didn't really do that good in Noosa but I got fifth, which is good considering and then I won the Surf Ranch. That's when I realized I have a real shot at winning this Title," Blomfield said.

The Hawaiian's first title came in 2017 when she was just 18. Her second came in 2019, and because their was no World Title in 2020 due to the Covid-19 pandemic, she is now the back-to-back World Champion. Both her previous Titles were won at events in Taiwan. Australia's Harrison Roach had a chance to claim his first World Title in his semifinal against Great Britain's Ben Skinner, but Skinner wasn't making that easy. with 15 minuets to go, Skinner had locked in a 15.84 heat total, leaving Roach in need of a 9.51 to advance.

This was unchartered territory for Roach, who had been cruising through the field. He fought back valiantly, but Skinner took the win and moved on to the Final. This meant Roach would have a nervous time as a spectator of the next Semifinal between Tudor and Silvagni. At this point, if Tudor lost, Roach would become the World Champion.

Roach came so close to claiming his maiden Title, after a solid performance at The Ranch and in 2019, at his home break of Noosa, but as one of the most talented longboarders in the world right now, surely it's just a matter of time before he clinches on.

"Obviously it's bittersweet. I would have loved to have brought it home," Roach said. "But Joel's the GOAT and I couldn't leave the door open like that. It's unfortunate but I am happy coming second, I really am." England's Ben Skinner poised on the nose at Malibu enroute to the best result of his career. - WSL / Thomas Lodin Tudor Gets One Back Against Kaniela Stewart

Joel Tudor and Kaniela Stewart surfed against one another in the Quarterfinals, with the legend taking the win against the young prodigy -- a reverse of a big heat the pair had at the new Longboard Classic New York in which they swapped boards and Tudor later metaphorically passed the torch to Stewart. Kaniela Stewart and Joel Tudor had a rematch of their famous heat in 2019 after which Tudor passed the torch to Stewart. - WSL / Thomas Lodin

Earlier, Day 1 of competition saw a number of big upsets with serious implications for the respective World Title races. Perhaps the biggest was the elimination of men's ranking leader Edouard Delpero, who was coming off a win at the Cuervo Surf Ranch Classic.

Delpero had been in the box seat to claim his first World Title, though came up against a veritable superheat of Tudor and former Longboard World Champion Steven Sawyer. After coming off worse for wear from this match up, Delpero had to surf against two Brazilians in the Elimination Round, Jefson Silva and Rodrigo Sphaier, both of whom were holding nothing back and eventually eliminated the surfer from France. Edouard Delpero had recently claimed a solid victory at the Surf Ranch which catapulted him to the top of the men's rankings. - WSL / Thomas Lodin

The upsets didn't stop there, though. Two women who were serious contenders for the World Title were unexpectedly eliminated. Soleil Errico is a Malibu local, and had placed runner-up at the Cuervo Surf Ranch Classic. Her surfing was so strong at the Ranch -- and she knows the wave at First Point so well -- that it was hard not to consider her a favorite. She was left needing a score in the final minutes of her heat against Zoe Grospiron, who had earlier banked a solider 7-range score which made it a tough ask.

Meanwhile , 16-year-old Kelis Kaleopaa was another favorite. With a win counted in her scoreline from the 2019 Noosa Longboard Open, she was in with a very strong chance. But she found herself in something of a Waikiki all-star heat with two generations of Hawaiian longboard phenomenons having to face each other. In the end, it was Kelia Moniz who took the win, dedicating it to her professional surfer brother Josh who recently suffered a serious injury in Portugal.