Fields dwindled to just 16 competitors at the World Surf League (WSL) Vans Pro, Stop No. 2 of the WSL North America Qualifying Series (QS), with two-foot swell delivering more magic moments. The women's and men's Round of 32 provided plenty of big performances and drama with slow conditions testing competitors' wits, and strategy. Now, a spot into the Quarterfinals is up for grabs with some of the region's best in the mix alongside the Coastal Edge 60th Annual East Coast Surfing Championships (ECSC).

Vans Pro Highlights Day 3: Lindblad, Mel Light Up Virginia Beach
1:22
The fields are dwindling and the stakes are rising with a 17.00 heat total from Sawyer Lindblad, an 8.10 from John Mel, plus more to set up a big moving day.

In the week's best conditions thus far, women's top seeds delivered a showcase of high-performance surfing with current North America No. 1 Sawyer Lindblad leading the way. The 18-year-old laid down a near-perfect 9.50 (out of a possible 10) and 17.00 (out of a possible 20) heat total with her ferocious backhand attack. This marks Lindblad's maiden trip to Virginia Beach and she wasted no time getting acquainted.

"I was watching it yesterday and it actually looked fun so I was stoked to get out there today," said Lindblad. "When I was paddling out, I did not see any good rights really and then all of sudden that wave came to me. " 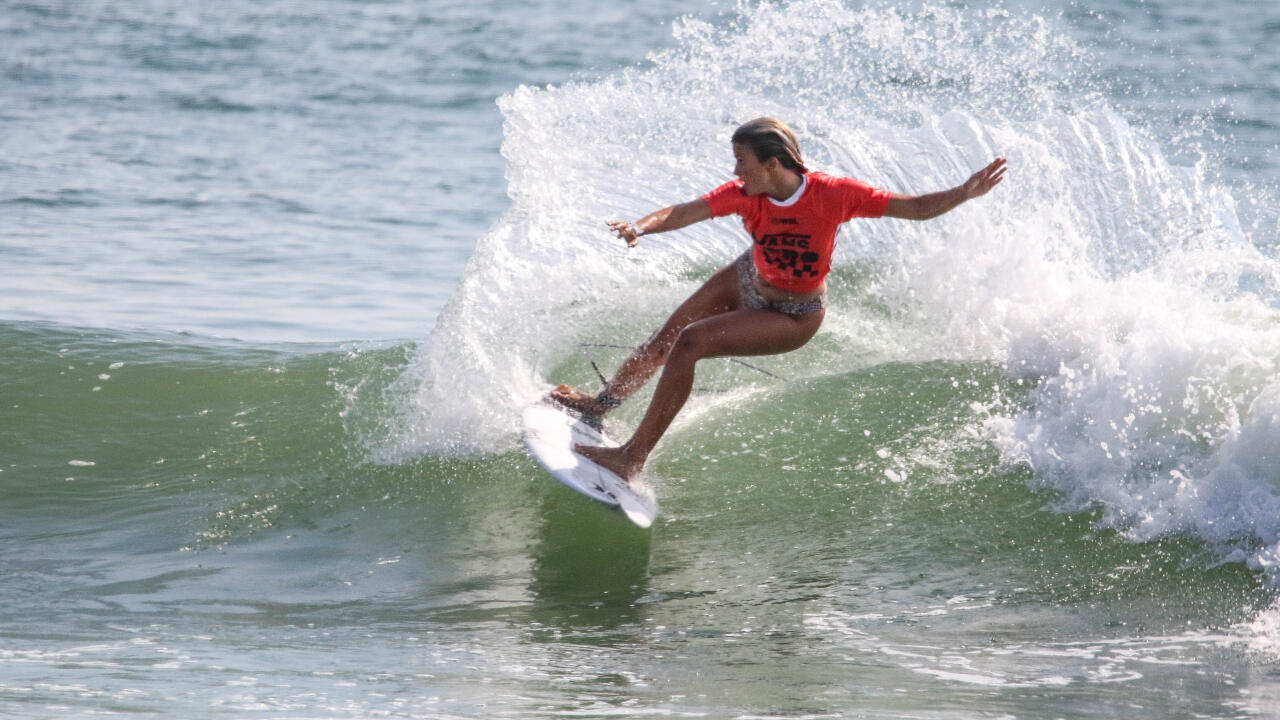 Right behind Lindblad on the rankings, the East Coast's own Zoe Benedetto also delivered an impeccable heat from start to finish. The 16-year-old was in control of her Round of 32 debut right out of the gates and didn't stop, accruing a 13.13 heat total along the way. For the Palm City, Florida competitor, Benedetto felt right at home in her first appearance alongside the long-standing ECSC.

"It's my first time here and it reminds me a lot of home with the way the wave breaks, it's very similar to Cocoa Beach," said Benedetto. "Being in that seeded round sometimes you're waiting a little longer to start and the nerves can build up, so it was nice to get going early and just not think about it. It's always good to get a heat win right away and get that momentum."

Men Deliver Excellence, Nail-Biters, and Determine Round of 16 The men followed the women's electric start with sparks of their own as Challenger Series competitor Jett Schillingput on another great showing to keep his winning momentum alive and well, but it was Round of 32 Heat 4 that witnessed fireworks.

Virginia Beach's own Michael Dunphy, current North America Pro Junior No. 1 Tommy Coleman, an in-form John Mel, and Brazilian Alcides Lopes. Mel garnered a brilliant 8.10 as Dunphy backed up his 7.00 to take the lead and Coleman earned a 7.67 in a crucial exchange, but it was Mel who held firm after finding a backup score and a vital heat win.

"To get a gift like that from Virginia Beach is the best thing ever," said Mel. "I never have too many expectations coming here and I was stoked to get a couple. The most crucial point of that heat was toward the end and I knew I needed a wave to go to first because Tommy (Coleman) only needed a 5-point ride, and he's so lethal. Last year I thought I was doing well and then didn't finish strong so this year I'm just taking a new mindset into it, and just having fun." Taro Watanabe is finding his rhythm and becoming more dangerous each new round. - WSL / Andrew Nichols

Taro Watanabe put on a forehand clinic to garner a 7.50 in his Round of 32 heat win. The Malibu, California competitor narrowly missed out the Challenger Series in 2021 and comes into the 2022/23' season ready for more and back on the East Coast where he's found victory in the past.

"The waves are a little better today so it's nice to actually get some sections to hit," said Watanabe. "It's a pretty important contest and every heat I make I'm super happy, just excited to keep it moving. I realize how important these QS 3000s are and it's a lot of points, and I just want to stay consistent this year." An in-form Alan Cleland looks unstoppable with another big heat win to his name heading into the Round of 16. - WSL / Andrew Nichols

Alan Cleland continues to look like the man to beat with another commanding heat win, accruing a 14.00 heat total in the process. Also, big heat wins from the likes of Challenger Series threat Eithan Osborne join the Round of 16 alongside event standouts Jabe Swierkocki, Kei Kobayashi, and Virginia Beach's hometown hero Blayr Barton.

Kirra Pinkerton's 15.37 and Sawyer Lindblad's 8.17 added their names to the Round of 64 danger women! Lindblad is eyeing down back-to-back

The 17-year-old from San Clemente, California already staked her claim as the youngest Super Girl victor so far and now adds her name to

0:42
- WSL
Monday, October 10, 2022
Every Excellent Wave! All The Best Action From The EDP Vissla Pro Ericeira