If you attended the world-champion-deciding WSL Finals at Trestles this year, you may have noticed something different on your way down to the contest area. Pulling off of Old Pacific Highway into the event parking lot, visitors were welcomed by a large sign that read, "Mii way. Ommop qali Acjachemen exal kiich," along with its translation, "Hello friend. You are on Acjachemen homeland."

On its own, it may seem like a small gesture-a simple acknowledgement of the Acjachemen people who have stewarded this stretch of southern Orange County coastline for more than 10,000 years. But it's part of a larger commitment by the WSL to not only acknowledge the Indigenous communities where surf events are held, but to build relationships with these communities that celebrate their historical and continued contributions to these coastal areas. 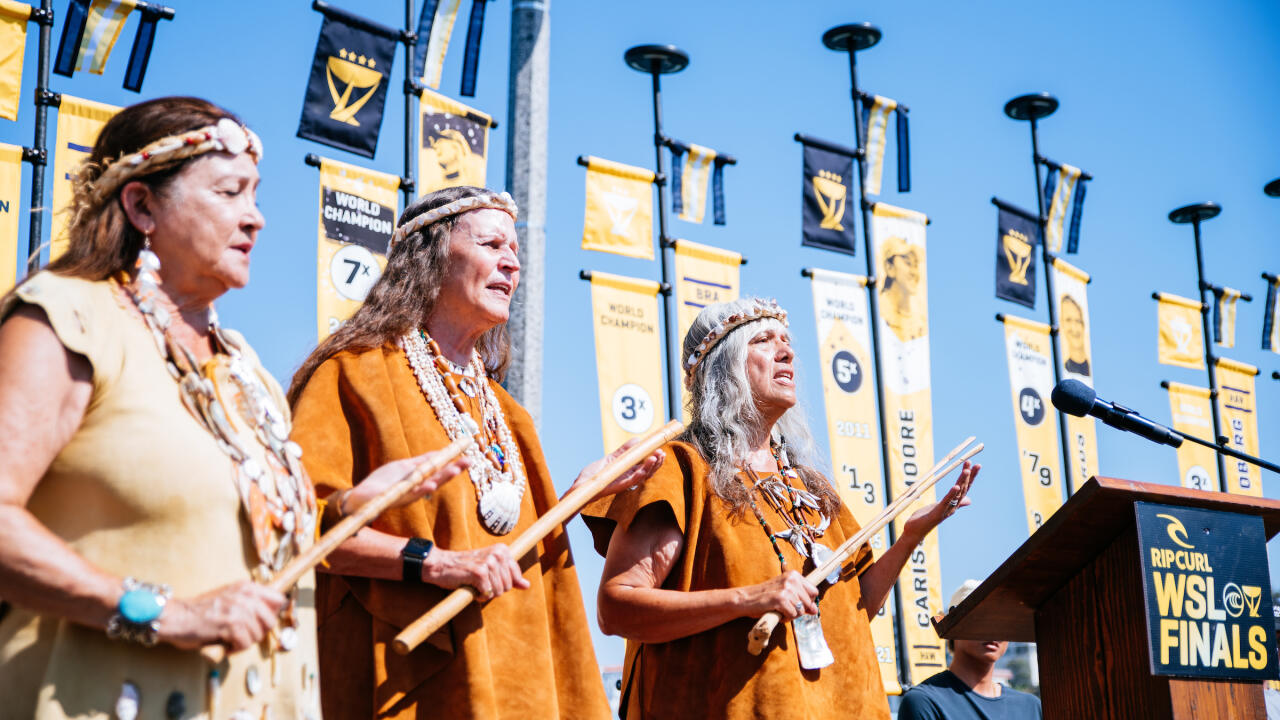 From left to right: Ellen Sue Schneider, Mariah Doyle Sandoval, and Adelia Sandoval, Spiritual Overseer of the Juaneño Band of Mission Indians / Acjachemen Nation at the press conference prior to the commencement of the Rip Curl WSL Finals on September 6, 2022 at San Clemente, California. - WSL / Beatriz Ryder

"At these breaks, people celebrate surf culture," says Acjachemen tribal culture bearer Rebecca Robles, who helped coordinate this year's land acknowledgement at Trestles. "But underneath surf culture is the culture of the Acjachemen people, the Luiseño people, the people who are native to the land. It's very gratifying to be at this point in history where we're acknowledging the presence of Indigenous people, their contributions, their knowledge, and what it means to have a connection to the land for more than 10,000 years."

This year, with guidance from Indigenous leaders like Robles, the WSL has incorporated land acknowledgements into nearly every World Championship Tour event, from G-Land to Bells Beach to Pipeline and beyond. They represent a tremendous shift for competitive surfing's governing body, which is increasing the visibility of Native people on their home coasts and helping educate the surfing public about the rich history of their favorite surf zones. As part of WSL's We Are One Ocean Initiative, the league's engagement with Indigenous communities also provides a platform to showcase ways Indigenous people traditionally stewarded their ocean-based homelands over generations. 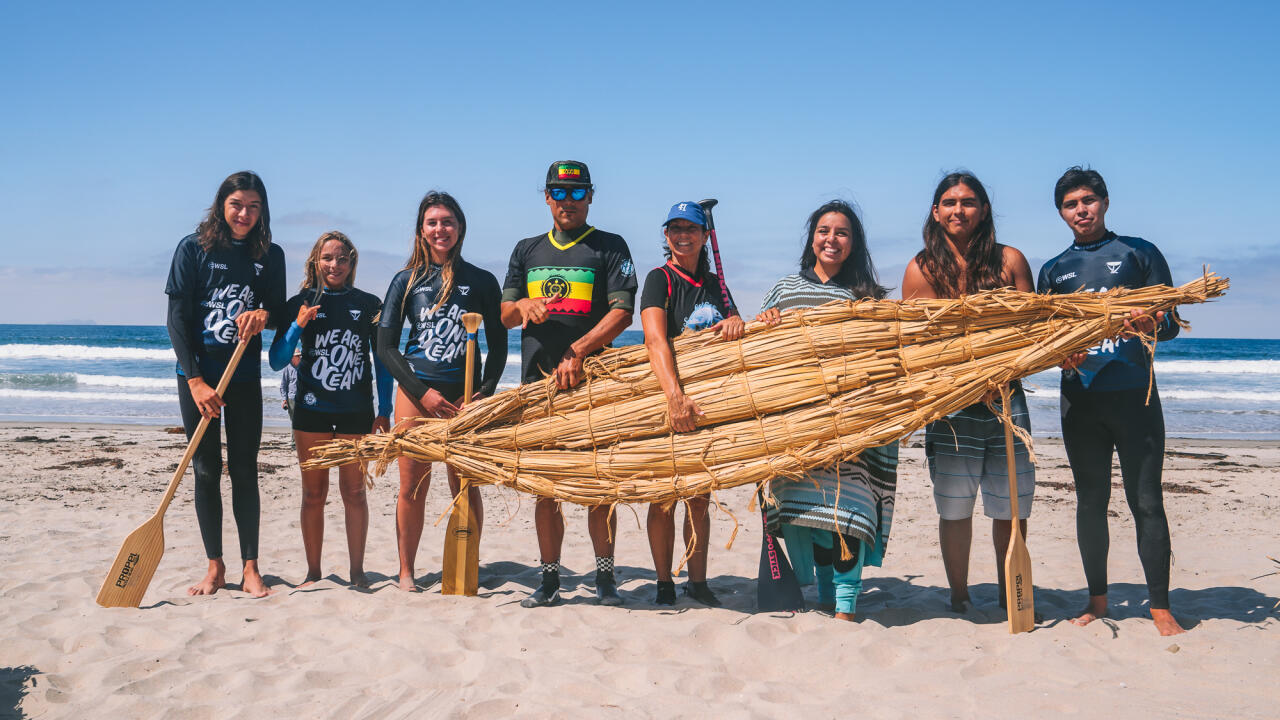 "When I first started surfing in 1980, there was no real acknowledgement by the surf industry of Indigenous history along the coast," says Dina Gilio-Whitaker, a member of the Colville Confederated Tribes, lecturer of American Indian Studies at California State University San Marcos, and the WSL Indigenous Engagement Advisor. "But, it was not common for people to be aware of that. I didn't fully understand the history myself until I became educated. Only then did I become aware of the fact that surf culture as we know it could only have become implanted in California on the heels of the ethnic cleansing of Indigenous people, and it's important for us as surfers to know that." Five-time WSL Champion Carissa Moore of Hawaii at the welcome to country prior to the commencement of the Rip Curl Pro Bells Beach on April 8, 2022 at Bells Beach, Victoria, Australia. - WSL / Beatriz Ryder

For Gilio-Whitaker, the standout moment of the 2022 World Championship Tour season wasn't a stratospheric air or cavernous tuberide, but something that actually happened on the sand during the WSL Finals at Trestles. On the beach fronting the iconic cobblestone break, Kumeyaay educator Dr. Stan Rodriguez led a tule boat building demonstration, showcasing how native people used sustainably-harvested materials to create the original California watercraft. "That goes beyond acknowledging-it showcases native science. The tule boat is a perfect avenue to talk about Indigenous knowledge bases and their underlying value systems." The WSL is also building relationships with Native communities through its annual WSL PURE Grant program. This year's grantee, Native Like Water, is a San Diego-based nonprofit organization working with Indigenous youth to re-establish their traditional connections to the coast. Native Like Water's mission to "indigenize education" began with its flagship program bringing Indigenous youth from across the country to the coast to learn about things like ocean conservation from Scripps Institute of Oceanography faculty or traditional cultural practices from Kumeyaay elders. Teaching surfing is integral to the program not only because it promotes mental and physical well being, but also because it reinvigorates the ancient wave-riding traditions of their ancestors.

"This grant will help us create a short film that we hope will change the narrative, showing Native people reclaiming their humanity along their coastal homelands," says Chavez. "To me, this relationship with the WSL shows that they would like to help build a more inclusive surf culture. As a platform that has worldwide attention, I think what they're doing is a great example of facilitating social change, and I hope that this is just the beginning of a long relationship."

Chavez, along with Native surfers Andy Nieblas, Shuuluk Leo-Retz, and Jessie Engel, was recently part of a panel discussion at Ohana Festival with the WSL's Director of Environmental and Social Responsibility & WSL PURE, John Suhar, and moderated by Gilio-Whitaker. While the Dana Point festival mainly showcases musical acts, it featured a storyteller stage that highlighted conversations happening around environmental conservation and social justice. The panel, called "The Indigenous Wave", is an example of how the WSL's efforts to uplift the stories of Indigenous coastal stewards can have a ripple effect in cultures adjacent to surfing. "Seeing what Dina, Emily Hofer, [Chief People and Purpose Officer] at WSL, John Suhar and the whole WSL team have been doing with Indigenous engagement and acknowledgement has really been influential, not just for the people putting on Ohana, but throughout the sports community," says Mike Long, the Director of Operations for the environmental nonprofit Parley for the Oceans and one of the curators of the Ohana Festival storyteller stage. "This year at Ohana, it was a huge priority for [event creators] Eddie Vedder and Mark and Laurie Smith to really create a space for the Indigenous community, and especially the local Acjachemen Nation, to be a part of the event."

For the 2023 competitive surf season, under the guidance of Gilio-Whitaker and other Indigenous leaders around the world, the WSL will continue to deepen its relationships with the Native people who have long been connected to the world's most iconic surf zones. From land acknowledgements to welcome ceremonies to video profiles, and WSL PURE's grant program, the next era of surf competition broadcasts should not only offer a deeper look into coastal history, but showcase the ongoing examples of coastal stewardship provided by Indigenous leaders. Cultural Practitioner Laiana Wong leads a blessing prior to the start of the Hurley Pro Sunset Beach on February 12, 2022 in Haleiwa, Hawaii. - WSL / Tony Heff

"What we're seeing right now makes me hopeful, and hope is not a word I throw around lightly," says Gilio-Whitaker. "I'm optimistic that we're actually changing narratives through the work that we're doing, and that's what's necessary at this moment-we need a paradigm shift. We're in an existential crisis right now because of a historically extractive relationship to the environment. If humankind is going to survive, that has to change to one based on relationality and reciprocity."