PRAIA DE ITAÚNA - Saquarema, Brazil (Monday, November 7, 2022) - The Corona Saquarema Pro pres. by Banco do Brasil, Stop No. 6 on the World Surf League (WSL) 2022 Challenger Series, finished off in spectacular fashion withAlyssa Spencer (USA) claiming the biggest win of her career so far over Tessa Thyssen(FRA) in the women's Final, and three-time WSL World Champion Gabriel Medina (BRA) defeating Ramzi Boukhiam (MAR) in the men's Final. The stage is now set for the remaining 2023 Championship Tour (CT) spots to be clinched at the final Challenger Series event of the season in Haleiwa, Hawaii. 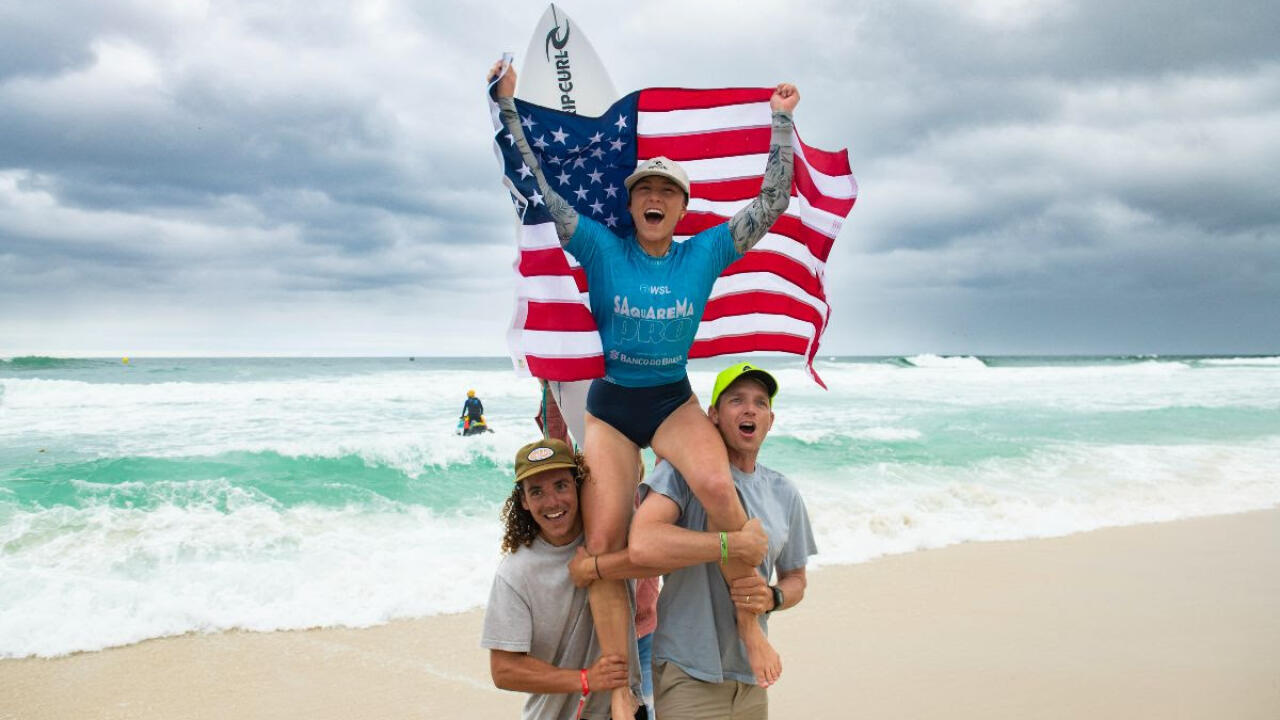 Event winner Alyssa Spencer (USA) being chaired up the beach at the Corona Saquarema Pro pres. by Banco do Brasil. - WSL / Diz

Spencer Wins Her First Challenger Series Event, Keeps Qualification Dreams Alive Spencer took home the biggest win of her career so far today, at the time when she needed it the most. She came to Brazil needing to make the finals in order to keep herself in reach of CT qualification, and she did just that under an immense amount of pressure. Spencer maintained her composure and form throughout the event, earning some of the highest scores and taking down several big names. Her road to the Finals today started with a matchup against an in-form Keely Andrew (AUS), in Quarterfinal, Heat 4. She then turned things up a notch in the Semifinals, Heat 2, against Amuro Tsuzuki(JPN), earning an excellent score of 8.67 (out of possible 10) on a solid lefthander.

Spencer then matched up against fellow goofy footerTessa Thyssen (FRA) for the Final. Once again, she was able to find the waves with opportunity and showcase her trademark style to earn a 7.17 and 5.73 to solidify her win. The win was an emotional one for Spencer as it means she now sits just outside the CT qualification line and still has the opportunity to clinch a spot for the 2023 CT in Haleiwa, Hawaii.

"There are so many ups and down throughout the year, we have so many events and it's so hard to be consistent and when you have losses it's hard to keep yourself up, but I've put in a lot of work this year, so it feels really good to have it pay off," said Spencer. "Brazil is amazing, I love the energy here and I've been feeding off of it. It's been such a good week and I've been surrounded by the best people, so I'm really happy." 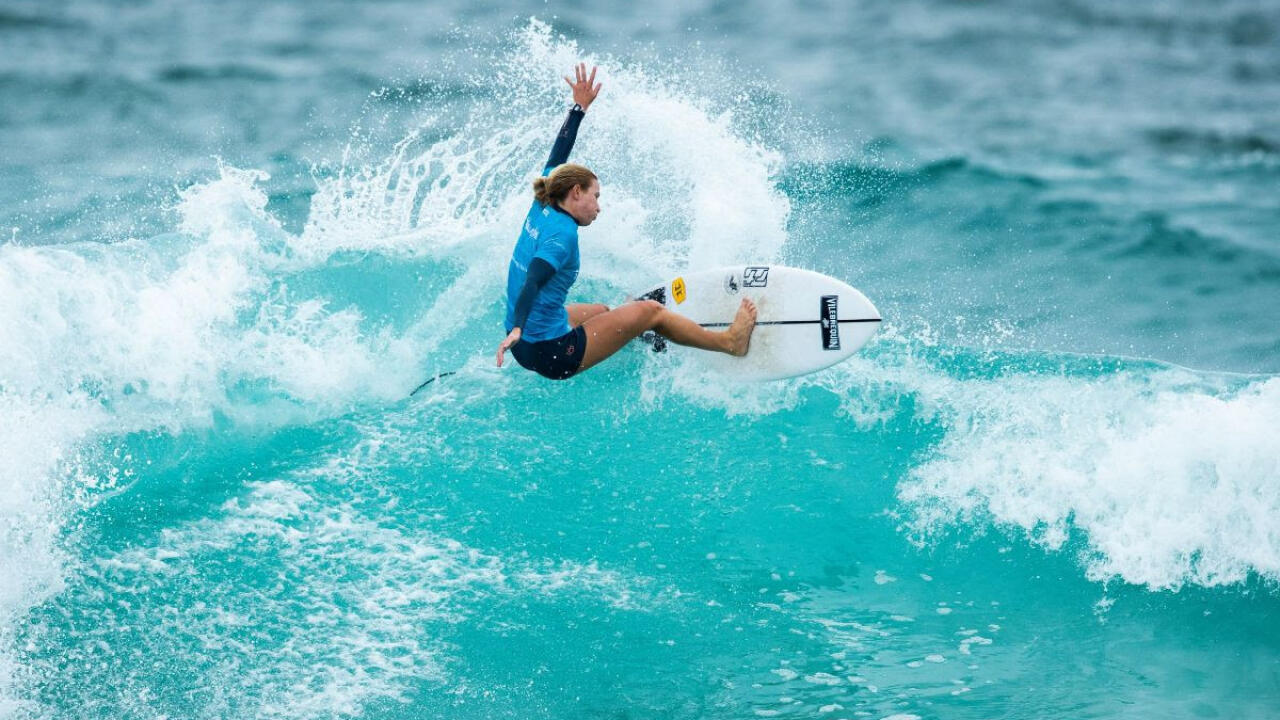 Thyssen had an incredible run of her own here at Saquarema, coming from 46th on the Challenger Series rankings, all the way to the Final. In her best performance of the day, she was able to take down the now current No. 5 ranked surfer, Teresa Bonvalot (PRT), in the Semifinal, Heat 1.

"I'm obviously super happy, I've been working a lot and I've been moving forwards step by step, so I'm really happy with the progress I've made during this event," said Thyssen. "Man, it's been hard with the weather this week, but the Brazilian vibes are just amazing. It's my first time here and I've really enjoyed myself during my stay." 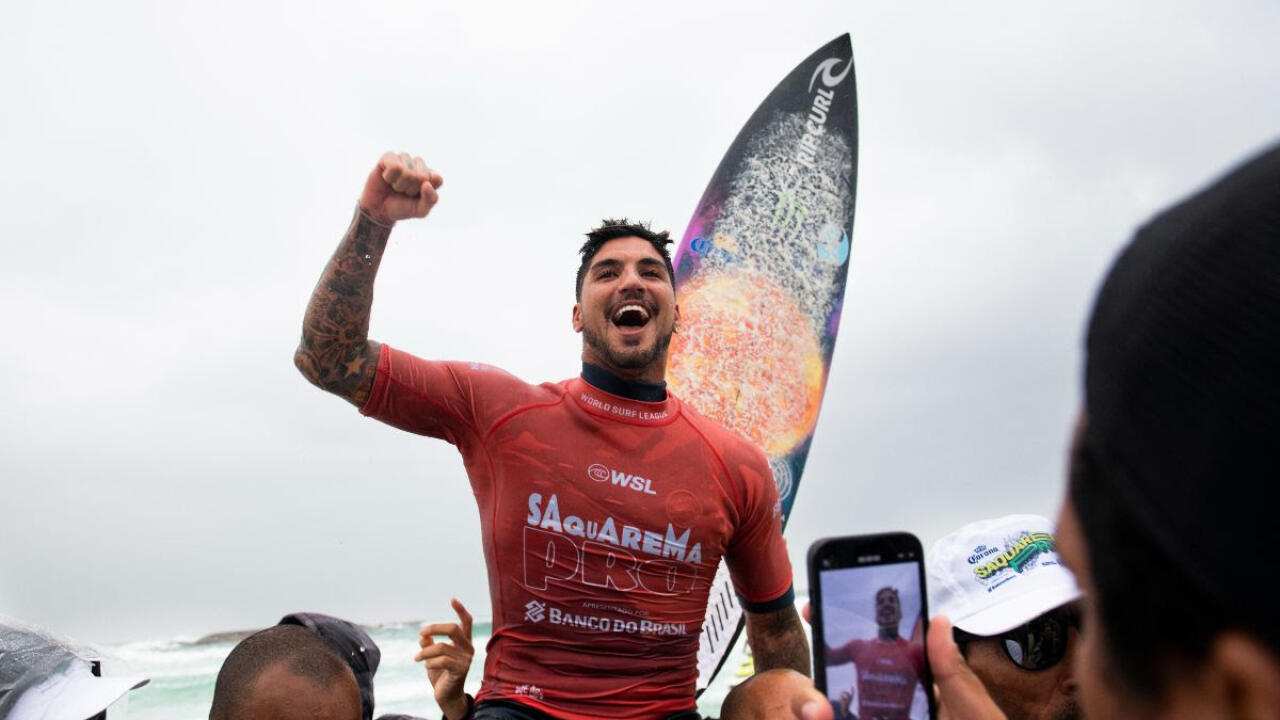 Event winner Gabriel Medina (BRA) being chaired up the beach in front of the Brazilian crowd at the Corona Saquarema Pro pres. by Banco do Brasil. - WSL / Diz

Medina once again made history, winning the first-ever Challenger Series event in Latin America. The Final between Medina and Boukhiam was a rematch of the 2013 World Pro Junior Championship which took place in Florianópolis, Brazil, where Medina clinched his first title prior to becoming the first Brazilian WSL World Champion in 2014. Medina and Boukhiam have remained friends since then and may potentially be on the 2023 Championship Tour (CT) together.

"Ramzi (Boukhiam) is a really good friend of mine, we've had a Final together before and he's someone I admire a lot," said Medina. "I know he trains hard, surfs incredibly well and I hope he makes it onto the CT because he deserves it. I'm stoked that I got the chance to finally win an event in Brazil, especially during such a challenging week here in Saquarema. I'm also happy that I'm 100% healthy and now we're only one month away from when the real work begins when I arrive in Hawaii." 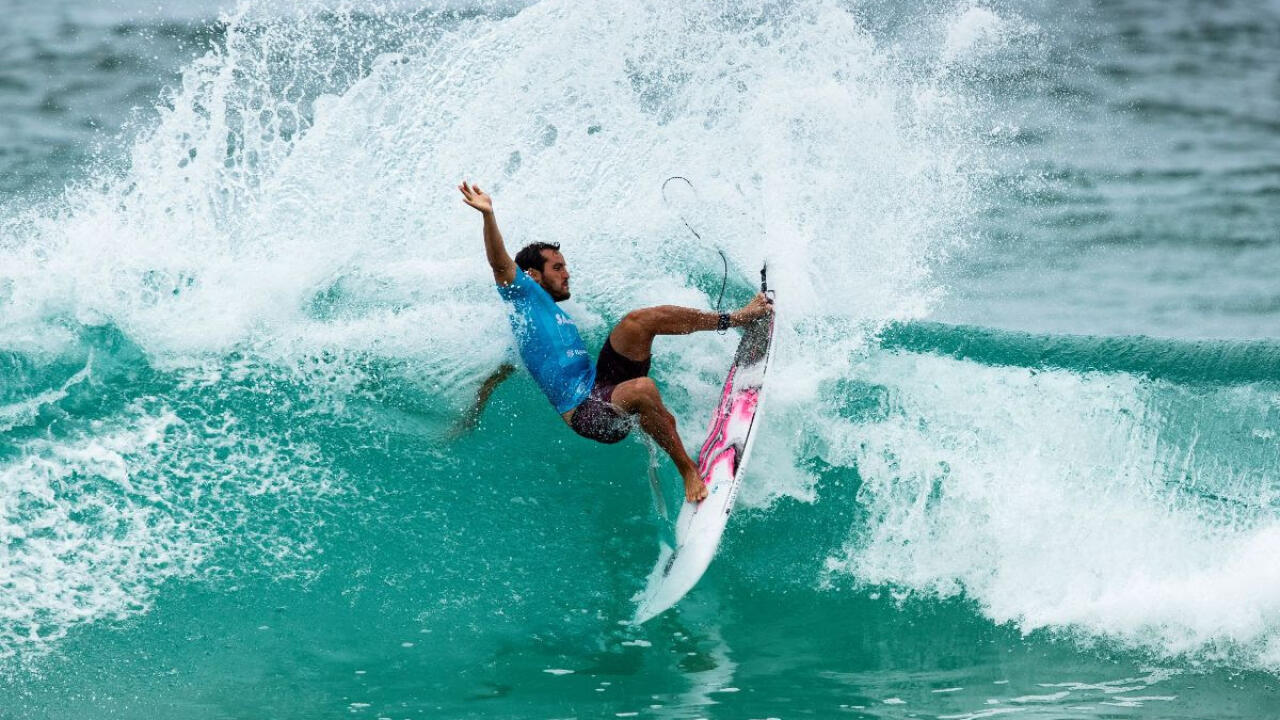 Medina's path to the Final was not an easy one having to go through Maxime Huscenot (FRA), in the Quarterfinals and local hero Joao Chianca (BRA), in the Semifinals. Both Huscenot and Chianca had a chance to guarantee their qualification onto the 2023 CT with an event win at the Corona Saquarema Pro, as did Boukhiam. Chianca has now moved up into 8th place on the Challenger Series rankings and Boukhiam now sits in 4th place.

"I really like Brazil a lot. I have a great connection with the country, with the people here and I'm really stoked with my result," declared Boukhiam. "Medina is my favorite surfer and I know I'd have to surf my best to have a chance of beating him. It was a close one and he got the score at the end, but for me, he's the best surfer in the world. I had a great time here, I think I was able to move up in the rankings and now I'm hopeful to make it onto the CT."

Highlights | Alyssa Spencer Dominates Saquarema w/ Big Win, Medina's Wild Comeback Should Scare The '23 CT
1:56
Alyssa Spencer put up excellent scores all event, resulting in a massive win which puts her within grasp of qualifying for the Championship Tour. 3x World Champ Gabriel Medina's return to competitive surfing, and denies the dreams of qualification for top-ranked challengers at the Corona Saquarema Pro.

Remaining 2023 Championship Tour Qualifiers to Be Decided in Hawaii

Going into the event, four men had a chance of guaranteeing qualification for the 2023 CT prior to the last event in Hawaii, those being Chianca, Boukhiam, Ian Gentil (HAW) and Huscenot if they made it to the Final. Although none were able to, the four took important steps towards guaranteeing their names on the 2023 CT. Boukhiam and Gentil now sit in fourth and fifth in the rankings respectively. Huscenot is currently tied in sixth place with Australian Liam O'Brien, and Chianca is in eighth place.

In the women's Challenger Series rankings, the battle for 2023 qualification has already confirmed three names, including Macy Callaghan (AUS), Molly Picklum (AUS), and Caitlin Simmers (USA). Bettylou Sakura Johnson (HAW) is currently sitting in fourth on the rankings, and is also practically guaranteed. With her Semifinal result, Bonvalot has moved up to the final qualification spot prior to Haleiwa. Spencer now sits just outside the cut line and could clinch her spot with another big win in Haleiwa.