The Los Cabos Open of Surf represents the largest surf contest in Mexico's history and will play a crucial role in determining qualifiers for the 2015 ASP World Championship Tour (WCT). The event at Zippers is the fourth of seven 6-Stars for the women globally. Dimity Stoyle (AUS) ripped through her heats with precision for huge scores. - WSL

Dimity Stoyle (AUS), 22, ASP Women's WCT rookie, continued her tear at Zippers, commanding the day's highest heat total of 18.87 in a Quarterfinals shootout against fellow WCT competitor Alessa Quizon (HAW), 20. Quizon was on fire throughout the day's competition, collecting two heat wins, two of the day's top heat totals of a 18.27 and 18.80, and a perfect 10-point ride. Still, Stoyle scored a near-perfect 9.87, edging out Quizon for the win by a final score of 18.87 to 18.80. Together, the pair would earn the highest scores of competition.

"That heat against Alessa (Quizon) was incredible," Stoyle said. "We were going wave-for-wave and it was just pumping. Alessa got the first two high scores and I thought she had it. I went hard on the waves that I got. I'm so happy."

"This venue is amazing," continued Stoyle. "It's the best stop we have on the QS and it's a perfect setup. I think this is a really exciting event for the girls and I'm excited to come back next year." While members of the ASP WCT dominated the marathon day at Zippers, Hawaiian up-and-comer Brianna Cope, (HAW), 19, had a breakthrough performance, besting World No. 7 Lakey Peterson (USA), 19, while securing a Semifinals berth.

"I was just trying to get waves," Cope said. "Lakey (Peterson) is such a good surfer and I was just able to get the better of the exchanges. I think for the Semifinals I'm going to try and have fun and surf and not let my nerves get to me."

Laura Enever (AUS), 22, solidified the Semifinals draw, taking a strong come-from-behind win against Paige Hareb (NZL), 24. Enever combined progressive forehand turns in the back half of the heat, notching a 7.83 and 7.10 for the win. 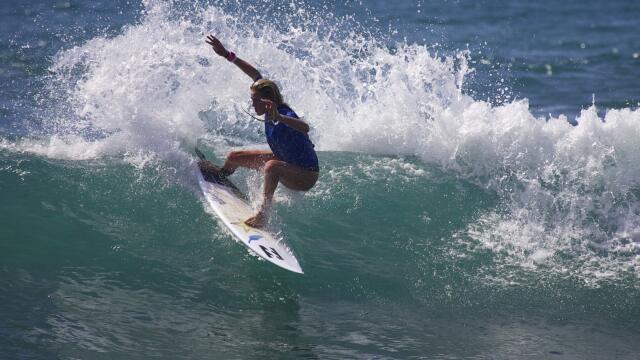 "I knew that'd be a tough heat against Paige (Hareb) and she started off well in the first half and I had a slow start," Enever said. "I'm glad I found those two in the end and happy to be in the Semifinals."

The Los Cabos Open of Surf holds a waiting period from June 16-22 and is webcast LIVE via www.aspworldtour.com.

Los Cabos Open of Surf competition completes Round 3, 4 and the Quarterfinals in pumping waves at Zippers.