As the Top 34 get warmed up for the Moche Rip Curl Pro Portugal, the fourth ASP GoPro Challenge has kicked off and submissions are rolling in. The Challenge asks competing ASP pros to submit their own GoPro videos from the contest venue starting two days prior to the contest window and no later than the conclusion of the competition.

The winning video will be selected by a panel of five judges -- three ASP staffers and two judges from GoPro -- based on the following criteria: 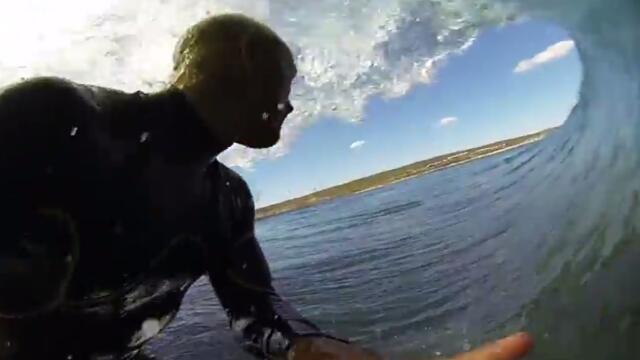 The Challenge is open to both WCT men and women at specific Tour stops. In addition to Margaret River, Fiji, Tahiti, the Top 34 will have opportunities in Portugal and Hawaii to submit competitive footage.

The winner at each stop receives US$15,000 if the clip was captured during official WCT competition and US$10,000 if it's from a freesurf during the contest window. In every case, it's the shooter who wins and not the subject -- whether the camera is hand-held, on a board, or elsewhere.

The ASP GoPro Challenge submissions doors have opened for the Moche Rip Curl Pro Portugal, with clips accepted until the end of the event window.

Josh Kerr's winning GoPro video from Margaret River
How good was Josh Kerr's barrel at The Box? The answer is on C.J. Hobgood's face.

The ASP GoPro Challenge debuted at Margaret River with 25 submissions. Judges selected one of two from Josh Kerr (AUS). Each of his videos showcased maneuvers from The Box that looked almost effortless. Kerr won US$10,000, the first cash pot of the series, and bragging rights for his budding cinematic skills.

The next stop for the ASP GoPro Challenge was Cloudbreak, Fiji's iconic lefthander. Tatiana Weston-Webb (HAW), replacement surfer for the ASP Top 17, made it to Round 4 of the Fiji Women's Pro, but a crazy Cloudbreak tube during the event's expression session topped all other submissions.

As if it couldn't get any better than surfing epic, triple-overhead barrels with one other person and water patrol, Nat Young (USA) won the Billabong Pro Tahiti incarnation of the ASP GoPro Challenge.

Check out all the clips from the ASP GoPro Challenge.