South African Travis Logie on Wednesday announced his plans to retire from the ASP World Championship Tour (WCT) at the end of the 2014 season. Currently World No. 32, he is 12 spots lower than the cutoff for requalification in 2015. He discussed his decision with the ASP at the Reef Hawaiian Pro, where he'll compete starting in Round 3.

ASP: Why did you decide to retire now?
Travis Logie: I'm almost definitely not going to requalify [for the WCT] at the end of this year and I felt like it's time for a change. As much as I love doing it, I'm not ready to go back on the Qualification Series (QS) and I needed some time at home, in one spot, to be with my wife more. It just feels like it's time for a change. I feel like I'm surfing good enough to do the QS and requalify, but I've done that over and over and this is something different. The 10-year Tour vet has had his share of heavy wipeouts, in Tahiti and beyond. - WSL / Kirstin Scholtz

ASP: Was there a definitive moment when you knew that you were ready?
TL: Yeah, it was when I got hurt in Tahiti [at the 2014 Billabong Pro]. I've been hurt so many times this year, I figured maybe it's a sign from the universe telling me that maybe it's time to mellow out and cool down and just have fun. Also, I've lost a little bit of that competitive spark. My friends are there on Tour, and I don't enjoy beating them as much as I used to.

Another moment was, the heats that I did win this year, I wasn't pumped. I almost felt more sorry for the guy I beat than stoked for winning. So that's when I realized. Growing up I was a ferocious competitor and didn't take any prisoners. But I'm not in that frame of mind anymore. I was thinking even before I got hurt, maybe the competing thing's over for me.

My friends are there on Tour, and I don't enjoy beating them as much as I used to.

ASP: Reflecting on your career and this decision, is there anything else that has been important in this move?
TL: A big thing is how hard this decision was. One part of me wants to carry on doing this because it's such a great lifestyle. It's a family vibe that we have on Tour. I've become friends with a lot of the guys. I'm going to miss that probably most of all.

But when I look back, if you'd told me when I was 20 that I was going to have three years on the WCT, I would have taken that. I've been on it for 10 years now. It's exceeded my wildest dreams. It's been amazing. I'm proud of it, and I'm stoked for everyone who supported me along the way and the ASP for letting me do what I love.

Logie scored a nine-point barrel at the 2014 Billabong Pro Rio.
Travis Logie pulls off a last-second win with this 9.50 barrel in Round 3.

ASP: What were those conversations like at home? How long have you been thinking retiring from Tour?
TL: It's been up in the air for the last two years. I've been talking about it with my wife, especially, and my family. It started coming to me when I did win and I wasn't that stoked and when I did lose I wasn't that bummed. That's when you know that something's not right. You should be a bit bummed â€“ at least for a day or two and then you get over it. But I wasn't even getting bummed when I lost. I was like, 'Oh, whatever, I'll play golf.' When that started happening, we were having discussions.

Another huge moment for me was when I watched another competitor make the Semifinals in Portugal, in a Prime. And when I saw his reaction, he started crying in the water, for making the Semis. And I thought, 'You know what. It's guys like that who should be on Tour, not a guy like me. Not a guy like me who's been doing it forever who isn't stoked to make heats anymore.' That was another turning point for me. Despite Logie's tube-riding, Kolohe Andino eliminated him in Round 5. - WSL / Kirstin Scholtz

ASP: That's pretty selfless. It's easy for anyone to sit back and say, 'I've worked hard, I deserve to keep going.'
TL: [Laughing] What's also made it easier is the fact that I'm getting knocked off Tour. If I were qualifying, right now we probably wouldn't be here having this conversation.

ASP: When you picture the day that you land in L.A. after the Billabong Pipe Masters, what's the first thing you're going to do â€“ that you can share publicly?
TL: I'm probably going to take my wife on a trip somewhere. I don't think we've been anywhere where I wasn't doing a surf contest. So it would be nice to go on holiday when I can be 100 percent present and I'm not stressing about heats. That's the biggest thing I have planned in the near future.

ASP: When you envision your life post-Tour, what does that look like?
TL: I don't have any concrete plans at the moment. I definitely would love to stay involved in surfing, because it's my passion. I'd like to take some time off and hang with my family and be in one place for longer than two weeks.

ASP: Thinking about your career, are there top three moments that you've had on Tour?
TL: One of the big moments of my career was wining the World Games at my home beach in front of my whole country. It was huge for South Africa, and it was a huge result for me. After that would be when I won the 6-Star in France and it got me on Tour. At that point I thought, 'Just give me one year.' And then I made it and I thought, 'Just give me two years, so qualifying wasn't a fluke.' And it's been 10 years now. 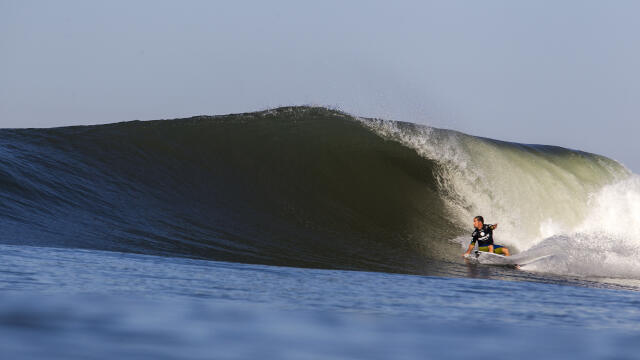 Logie was in form at the 2014 Hurley Pro but Andino beat him again, this time in Round 2. - WSL / Rowland/ ASP Handout

And then being on Tour, when I got third at Teahupo'o when it was massive. It was the half-year cutoff, and going into that event I needed to get third to make it on Tour. And I got third, which is something I never thought I could do. And I did it with all that pressure so that was one of my favorite events and favorite results of my career.

ASP: Is there anything that no one told you about being on the World Tour?
TL: One thing is that people seem to complain a lot and I always remind them that it's worth every bit of blood, sweat and tears you go through to make the Tour. It's the best lifestyle ever. You get paid to do what you love. I didn't know how cool it was until I was actually on there. And when I got knocked off, I realized again how lucky [I was] to be on. I've appreciated every minute, and the last few years I haven't taken any of it for granted, that's for sure.

ASP: What's the secret to success and longevity on the Tour?
TL: Keeping a level head and having a strong mind. Not letting the losses get to you too much. I've seen guys with amazing talent who've come and gone, because when they lose their confidence goes out the window and they get really negative. It gets to them too much.

The guys that manage to stay on Tour a long time, they manage to brainwash themselves into staying positive. Just keeping a level head and eating healthy. You don't have to be a robot, but making smart decisions most of the time.

The HIC Pipe Pro is back and after a pair of runner-up finishes at the fearsome Hawaiian reef, Moana Wong hopes this year "it's pumping."