The lineup for the final ASP Heritage Series heat is stacked: Sunny Garcia (HAW), Tom Carroll (AUS), Gary Elkerton (AUS) and Derek Ho (HAW) are poised to do battle at Banzai Pipeline as part of the Billabong Pipe Masters.

The Heritage Series launched this year with a rematch between Tom Curren (USA) and Mark Occhilupo (AUS) at J-Bay, where Curren proved he still had it with this Perfect 10. The Series last saw a rematch between two of surfing's biggest rivals when it pitted Brad Gerlach (USA) and Martin Potter (GBR) at Lower Trestles. Now the dynamics in the water are doubled. Meet the surfers slated for the Heritage battle at Pipe. Sunny Garcia is known as the last of the old-school power-surfers. He remains the only male pro surfer to finish in the Top 10 for 11 consecutive years. In the ASP Heritage Series heat at Pipe, he'll face Derek Ho, with whom he already has some history: In 1993 Garcia and Ho got into a fistfight. While he officially retired in 2005, Garcia remains an active and worthy competitor. In 2009, he finished third in the Quiksilver in Memory of Eddie Aikau, a contest in which he continues to participate. In 2012, he won the HIC Pro at Sunset Bech.

(Read ASP's recent interview with Garcia during the Vans World Cup and check out his GoPro Moment from the North Shore.) Tom Carroll made a name for himself as one of pro surfing's premier tube-riders and his record at Pipe -- where he's won three times (1987, 1990 and 1991) -- shows why. In 1988, Carroll became the first million-dollar surfer when he signed an exclusive 5-year contract with Quiksilver. He was also the first goofyfooter to win a World Title. More recently, Carroll has kept his competitive edge -- and good karma -- alive with an ongoing commitment to SurfAid and the SurfAid Cup. 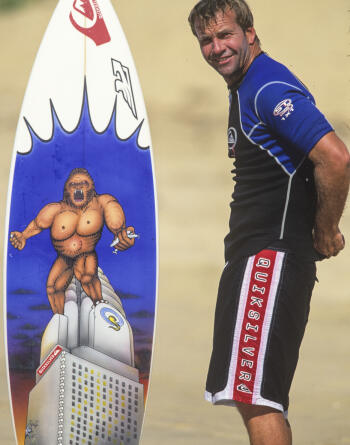 A fierce and aggressive competitor, Gary Elkerton's long list of competitive rivals know him as Kong, reportedly a childhood nickname. From a young age, the Australian was known for his explosive and powerful freesurfing, as well as his intimidating public persona. In 1987, Elkerton famously became the first non-Hawaiian to win the Triple Crown series, though he went on to lose the World Title in the final event of the season. He was a three-time World Title runner-up, including the 1993 Tour, when he fell to Derek Ho at Pipe. A second cousin of legendary Hawaiian singer Don Ho, Derek Ho's last name preceded his surfing talents on home turf. Ho and older brother Michael were North Shore chargers from an early age, trading Triple Crown victories from 1983 to 1986. Derek, however, went on to claim two more Triple Crown titles, swapping victories with Elkerton from 1987-1990. In 1993, Ho won his first and only World Title in the final heats at Pipeline, where he narrowly defeated Elkerton.

Watch the Billabong Pipe Masters and the Heritage Series LIVE daily on this site through December 20, 2014.

Larry Blair won two Pipes, back to back. This kid from nowhere! He tried to win a third and the whip came down.

Three world champs enough for ya?

In an epic battle that saw four legends take to the lineup, the two-time World Champ emerged victorious.

The final heat of 2014 to showcase some of history's most renowned Pipe Masters.