Sign up and pick your lineup for the Drug Aware Margaret River Pro, which kicks off April 15 at 7:00 a.m. local time. Download the World Surf League (WSL) app to receive Fantasy Surfing alerts.

Big Finals Day: Margaret's 2014
Check out the highlight rides from the last day at Margaret River.

By now you've heard about the purple blob that is on a direct course for the Drug Aware Margaret River Pro. You'd probably pick Shane Dorian and Mark Healey if you could, because the comp zone may resemble Waimea more than Main Break! 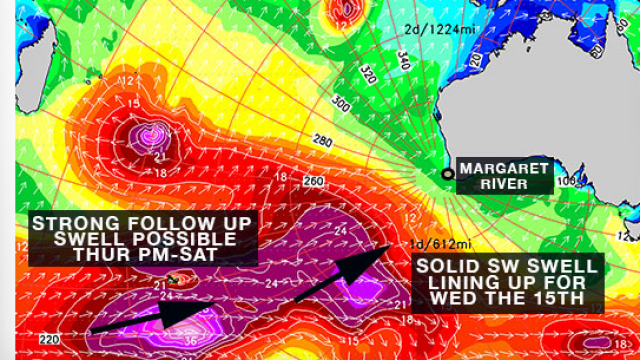 According to Surfline's forecast, a big swell is lining up for the Margaret River Pro. - WSL

But don't fret, there are many options on the Championship Tour (CT) who can be your Huckleberry. After all, these are the best surfers in the world for a reason! We all know they can huck and chuck in the small stuff, throw themselves over the ledge at Teahupo'o and draw lines at J-Bay, but this is different. This is Fiji 2013 Code Red-different. Swell pending, of course, this could be one of the "sickest" events in CT history. The event where legends are made.

The Filipe Toledo Show might get iced out for now as the conditions are going to be the farthest thing from the reverse-air playground we've seen in the first two events. What's so awesome is that guys like Filipe can show us that they will charge in the heavy stuff! You never know who might just come out of the cowboy closet and flex their charging muscles. With that said, this circus just got super interesting, making picking your lineup pretty challenging.

Kerrzy at the Box
Josh Kerr accepts the GoPro Challenge at The Box during the Drug Aware Pro Margaret River.

In case you didn't know, Josh is kind of a stud in big surf. He's been known to charge whenever the waves get big on Tour and has even shown interest in surfing Waimea and some outer reefs in Hawaii. Maybe more importantly, Josh has won at Margaret River before (when it was a Qualifying Series (QS) event) and made the Final of the CT version last year.

Josh is positively a standout at the Box, which could be greenlit if conditions hit right. Whatever this contest could throw at him, he has an answer. With his aerial prowess, big wave bravado and tube skills, he's my favorite to win this thing! Start 'em.

Check out Kerr in the new WSL docu-series Priority.

Slater at the Box
Kelly Slater, dolphins and a POV barrel at The Box. Kind of checks all the... well... boxes.

Much like Josh, Kelly is extremely driven in any and all conditions -- see wins at the Eddie, Pipe, J-Bay, and the US Open just to name a few -- making him the most diversified surfer of all time, let alone the winningest.

It's actually weird he's even in Tier B. I know you're going to pick him so here are some others in his Tier that you should consider for the same reason: John John Florence (HAW), Owen Wright (AUS), Joel Parkinson (AUS), Jeremy Flores (FRA) and even Wiggolly Dantas (BRA). These guys charge and rip in the chunky stuff. What a stacked Tier!

I have a feeling C.J. is going to get Medieval at Margaret's. I'd be a little concerned if the contest moves to the Box, as there is a big advantage for regularfooters at the notorious righthander. If the comp does goes there, the issue for Hobgood wouldn't be his ability to whip it in a heavy waves, but a matter of execution as a goofyfooter against a worthy opponent.

Hobgood Braves Heavy Conditions
At the Tahiti contest in 2014, Hobgood dropped into a bomb for a big score in Round 1, just minutes after his jaw-dropping wipeout.

C.J. could be just the man for the tricky conditions that are predicted to hit the region. Big drops and comfortable rail work on an open face seem right up his alley. With a horrible start to the 2015 season (two 25th-place finishes), C.J. needs to get going at this event if he wants to keep his card on Tour. It's funny how a different location and fresh conditions can totally change the lens on your Fantasy options. Get your C.J. specs on, because he's locked and loaded for this one. Start 'em.

I hate telling you to "sit" anyone on Tour, especially in Tier A. It's not so much who you sit in Tier A as much as it is who you start. Here's the thing: Jordy is super solid in heavy-water waves, but he had less-than-stellar results in heavy-water contests like Fiji (13th), Tahiti (25th) and Hawaii (25th). You really can't make a good choice in terms of sitting someone, but you can certainly make a bad choice in starting someone. (I think I just went cross-eyed.) Just sit 'em.

Banting Hung Up at Bells
Matt Banting lags behind Joel Parkinson in Round 3 of the Rip Curl Pro Bells Beach.

The lanky regularfooter has been ripping this year as one of the rookie class on Tour. Off to a decent start (13th-place finishes at Goldy and Bells) Matt has proven to be quick and loose. The waves are going to be big and heavy so I'd like to see what this youngster has. Until he proves himself, though, save him a seat on your bench for Margie's.

Ricardo has a decent act in juicy waves. So it's not a matter of his abilities that make him a candidate for the bench. It's his freshman blues that concern me.

At the first two events this year, he was like a deer in headlights. Christie seems like a cool cat who could produce some upsets this year, but even in Tier C you need to look for the surfers who are comfortable in their roles on Tour -- and Ricardo is just not there yet.

In keeping with the big wave forecast theme, Jeremy is a great dark horse pick. He won the Pipe Masters, the Andy Irons Award in Tahiti and is an Eddie Aikau invitee. He's solid in heavy pits (i.e. the Box) and ready to go if it's 15-foot death-drops at Main Break. With a well-lit fire in his belly this year and a passion to compete, this could be Jeremy's breakout event. Coming off of a ninth-place finish at Bells, Jeremy's got the juju flowing. Put him on your team so you can live vicariously through him as he slices up a bomb in Round 1!

Flores' Power at Fiji
Jeremy Flores shows little hesitation and a lot of power on a Round 2 bomb at the 2014 Fiji Pro.

Set your Fantasy Surfing picks and watch the action unfold LIVE daily on this site. The event window for the Drug Aware Margaret River Pro is April 15-26, 2015.

Ross Williams spent 10 years as a CT competitor. Currently, he's a WSL analyst and contributes a Fantasy surfing column before each event on the elite Tour, as well as provides up-to-date Fantasy intel each morning at 7:00 a.m. local time on the Dawn Patrol Morning Show. Follow Ross Williams on Twitter (@rosswilliamshi) and Instagram (@rosswilliamshawaii).