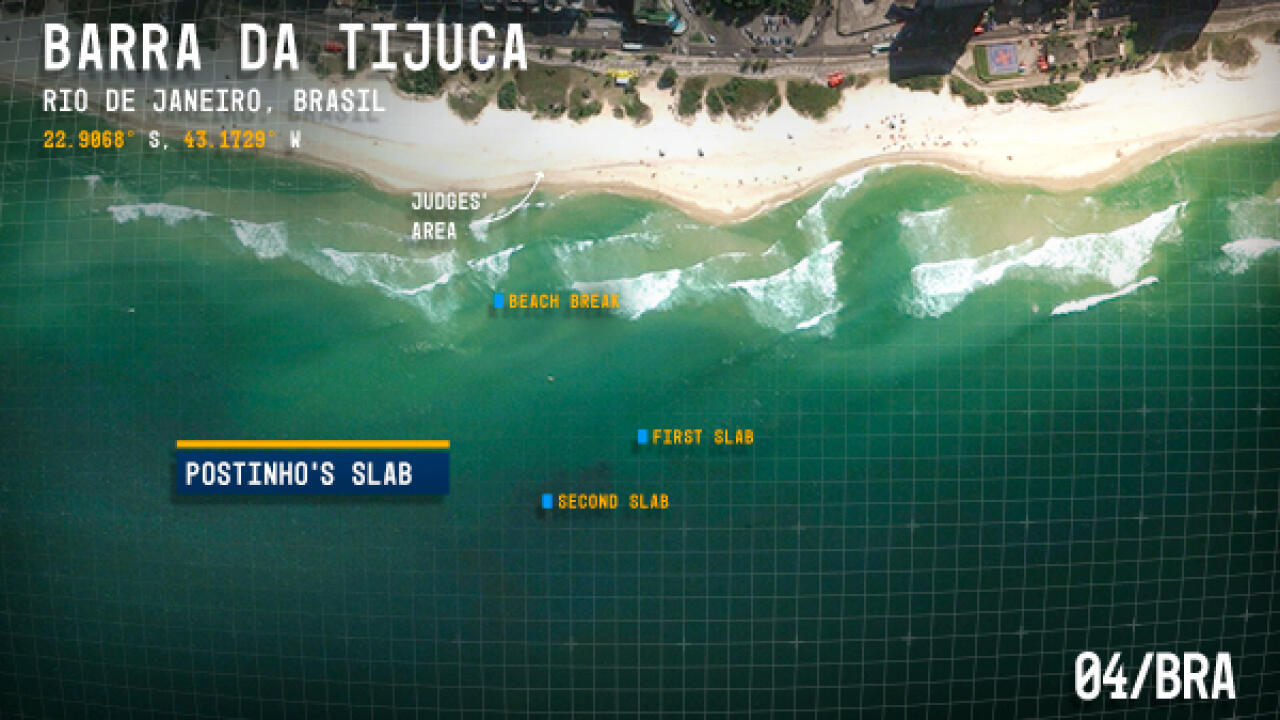 As the fourth stop of the Championship Tour and the first event following the Australian leg, the Oi Rio Pro plays a crucial role for the elite surfers who have a shot at World Title contention. Get to know the wave where the world's best will battle for points -- and glory.

After running in southern Brazil for eight years, in 2011, Brazil's CT event returned to Rio de Janeiro. It found a home on the sandy beaches of Barra da Tijuca, known for the infamous lefthander Quebra-mar. Just west of Quebra-mar lies the main contest site at Postinho. The sandbank there and the resulting slabs are more suitable for the big southern swells common during the time when the event window has traditionally opened.

In Autumn, the majority of swells that hit Postinho's area come from the south/southwest direction. When they reach 6 feet or more the waves begin to break on the second slab. Under these conditions the current eastward is strong, so it is advisable to walk a bit to the right before paddling out. After a long wave in, surfers often leave the water and walk back to where they started. At Postinho's slab there are two rocks that break the tide into three sections to the right on southwest swells. Waves start on the second section with a critical drop and connect to the final section, which offers a barrel or a large bowl. The inside forms a new, hollow section on the sandy bottom. The best tide on days with big swell is during the transition from low to full tide, when the waves gain power with the growing volume of water.

If you stay three meters in any direction of the peak, you will hardly manage to catch the wave.

"Because of the strong current, surfers need to position in the right place. If you stay three meters in any direction of the peak, you will hardly manage to catch the wave. If you are positioned in the rock area the wipeout can be heavy."

"In [mushier] conditions it is possible to simply stay inside, where the waves are more constant and offer tubes, airs, off-the-lips, floaters and strong reentries."

The first section of the slab starts to break with waves ranging from 4 to 5 feet. Below this size, the spot acts like a regular beachbreak, offering fast and hollow waves with good walls for every type of maneuver. Last year, Kelly Slater (USA) surprised everyone by surfing a large backside barrel to earn a perfect 10 in Round 5.

Slater's Rio Perfection in 2014
Kelly Slater pulled into a deep tube at the Billabong Rio Pro for a perfect 10.

"On days with east-southeast swells, the right is short and closes out and the short left comes up with good walls," explained Daniel Friedmann, one of the most respected surf legends in Brazil and the 1977 event champion. "In these cases, the conditions will mainly depend on the sand banks formed after the last swell.

"The wave of Postinho is powerful and allows all kinds of maneuvers. It requires an accurate wave choice to perform well and on the bigger days, the strong current [makes it] difficult to position correctly in the lineup."

Teco Padaratz (BRA), former CT elite and a contest organizer for more than 10 years, added that the close proximity of the break to the beach makes for a stunning spectacle. "The wave is strong and fast and allows athletes to surprise the audience with expressive and striking maneuvers," he said.

Friedmann, who is also an experienced and renowned shaper, recommends boards between 5'8" and 6'2" to surf Postinho's waves. "Because it doesn't have too much space, the wave doesn't require the use of bigger boards," he said. "However, in bigger days, those who prefer more comfortable paddling can choose a slightly larger board."

Along those lines, Rajzman noted the advantage of using round or round pintails in heavier conditions there. "Being a powerful wave, on the biggest days it is worth it to use pointed tails to have more drive and grip in the wall. On days of smaller waves one can use squash or swallow."

This year's contest in Rio is especially significant, as the CT so far has featured superb season starts from Brazilians Adriano de Souza and Filipe Toledo. Not to mention, of course, reigning World Champion Gabriel Medina. This year, the Oi Rio Pro may see the largest crowd in the event's history.

De Souza, currently No. 1 on the Jeep Leaderboard, won here in 2011. That win gave him the rankings lead for the first time in his career. The 2013 contest saw a repeat performance, when he finished runner-up to Jordy Smith (ZAF) and again became the Tour frontrunner.

More Break Breakdowns: Margies, from Main Break to The Box

Commenting on the importance of Rio to CT rankings, former CT surfer and Brazilian icon Fabio Gouveia said, "Some surfers who did not come to Brazil in past seasons were missing [points] at the end of the year. Kelly Slater himself went through that situation in 2012." That year, Slater sat out the Rio contest due to injury. He ultimately came up just short of the points he needed to win what would have been his 12th World Title.

"For Brazilians, I believe it is a factor that strengthens, rather than [adding] pressure. Racing at home the athlete grows, feels the warmth of the crowd and the pressure goes to foreigners." Adriano de Souza during the 2014 contest in Rio. - WSL / Smorigo

Said Padaratz, "This contest is important because it helps to develop the sport in the country, and with that athletes earn more respect and structure to work and evolve. The victories of Jadson (Andre) over Kelly at Imbituba [Brazil's CT contest 2010] and Adriano over Taj Burrow at Barra [in 2011] -- I was next to them at the awards and wept with emotion seeing Brazilians pave the way for the World Title that Medina [earned in] 2014."

Non-native surfers have done well in Brazil as well. One of the most iconic moments in contest history came from Slater's 1997 barrel at Barra da Tijuca. Slater disappeared behind the curtain and finished with an incredibly long floater to earn an unanimous 10. Thanks to his performance, the wave has earned the nickname "Barradoor."

Ricardo Macario is a surf journalist and former Editor-in-Chief at Brazil's Fluir magazine. He previously contributed a feature on Gabriel Medina's hometown to the WSL.