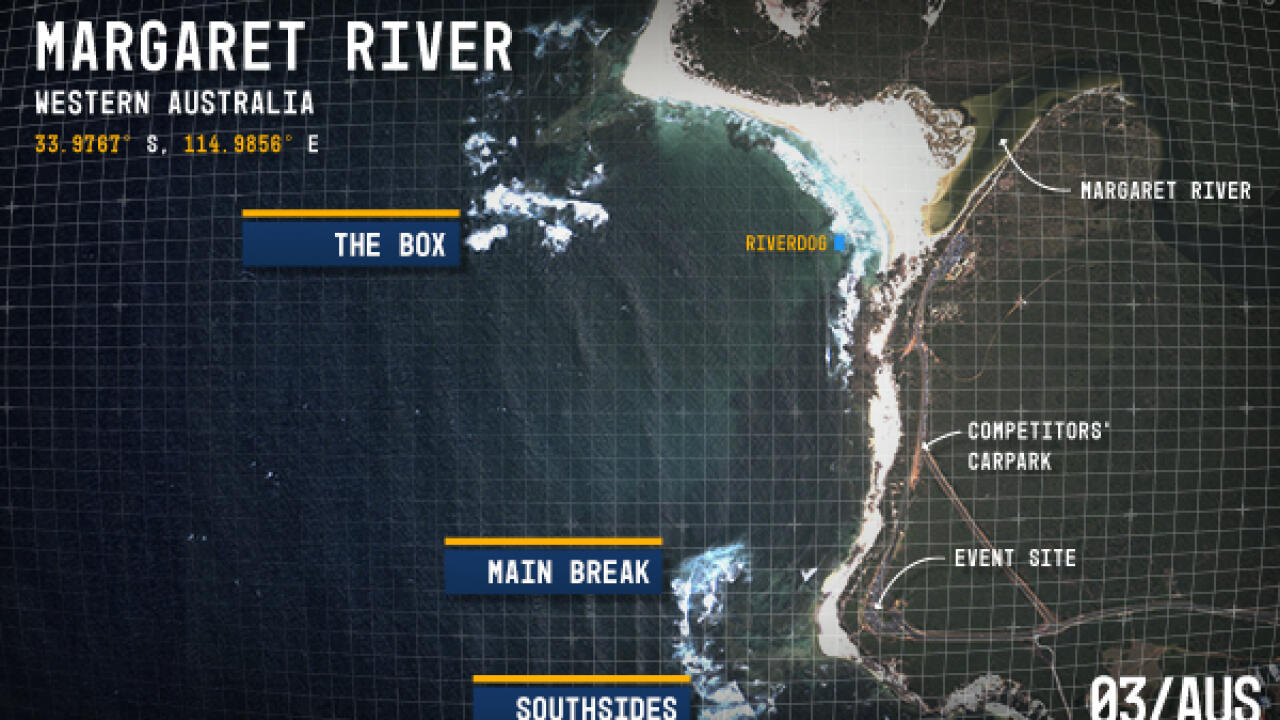 Main Break to The Box, a backup venue for the Drug Aware Margaret River Pro. - WSL

Next up on the men's and women's Championship Tour is the Drug Aware Margaret River Pro, at a set of breaks in Western Australia. Before the competition kicks off, get the breakdown of the waves, the place, and the perils.

From the car park at Surfers Point, Margies is a sight. When the Indian Ocean swells march in, they're visible from a distance. Most swells are from the south and southwest and a light southeast wind blows everything offshore, making it look pretty.

Waves tend to break first at Southsides, which can be an A-frame but mostly breaks south as a righthander. The waves then swing into Centers, then Main Break, and, at just about any size, form to a cobra head at Main Break with a left and right option.

Get the Break Breakdown for Supertubes on the Gold Coast

The left tends to be the dominant wave and in some some conditions, it tubes. Depending on the size of the wave and strength of your legs, the wave has a big, open face and heavy lip to belt. Just watch out for the Surgeon's Table: The shallow ledge occasionally contorts the final section of the wave, catching the unaware by surprise. A local, Creed Barnes, drowned here on the eve of the 1989 Masters when his leash got tangled in the Table. A monument in Barnes' memory now sits at the top of the stairs at Surfers Point.

Kerr Flies at Main Break
Josh Kerr, known for his aerial expertise, was among the pioneers of air-time at Main Break's righthander.

In the mid-to-late 90s, guys like Taj Burrow (AUS) and Jake Paterson, (both regularfooters), made Main Break's right increasingly popular, particularly as a quick scoring opportunity during heats.

The wall on the right is generally lower, allowing for tighter, more critical surfing. If the wind is blowing a certain way, significant airs are highly effective, as Josh Kerr demonstrated in his victory over Burrow in 2010, one of the most climactic Finals in recent history.

Once Main Break hits 10 feet high, the right begins to disappear and anyone brave enough can continue picking off bombing lefts that peel into the middle of the bay. 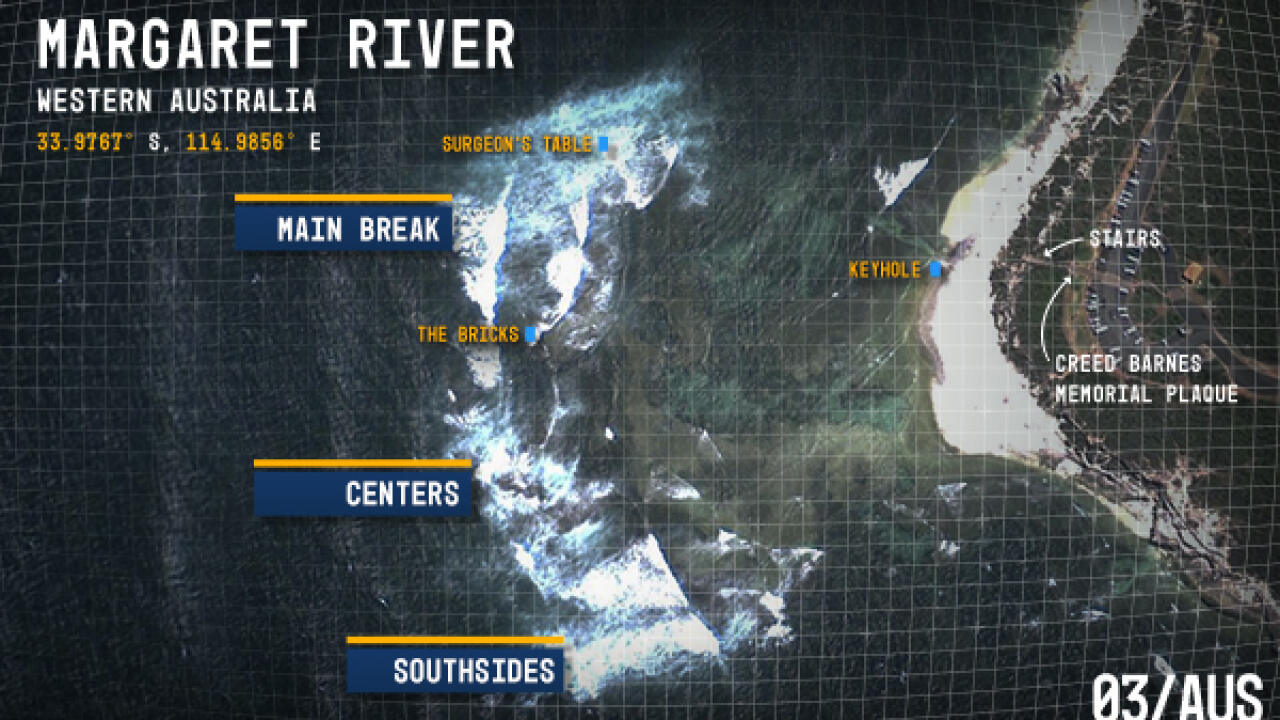 But after it hits 12-to-15 feet, all bets are off. You might find yourself outrunning (or worse, trying to duckdive) a closeout that has linked up with The Box, the shallow right-hand reef on the northern end of the bay. Unless you're among the intrepid surfers who have made history with epic rides at that size, you might want to head in, get dry, pull on your boots and watch from the car. Not many crews continue to tackle Margie's beyond this size.

According to Dave MacAulay, a former pro and shaper from Western Oz, the potential for heavy wave volume at Margaret's is one of the spot's special features, and has earned it comparisons to breaks in Hawaii. "It handles about as big as you want to surf," he said, which makes picking your equipment wisely all the more important.

The main thing with your equipment for Margaret's is that you need hold.

"The main thing with your equipment for Margaret's is that you need hold. You generally need more hold than you do at other locations around the world, so you'll see a lot of pros riding rounded pintails with a bit more length so you've got more rail to utilize so you can set it, turn hard and not skip out."

Main Break has a habit of breaking boards, and as MacAulay knows all too well, leashes too. In 1990, he was in a heat against Paterson -- then a 17-year-old rookie -- when the waves became huge and his leash snapped. He faced a long swim, and his chances to advance in the contest were cut short, so to speak. He wasn't the first surfer to suffer such a fate, so he presented the matter to the then-ASP Board.

"I said, 'we've got to have caddies at Margies,'" he recalled. "'We have them at Sunset [in Hawaii] -- so we've gotta have them at Margies, you know?' So we've had them from then on." Board caddies in surfing perform the same function as in golf: They're on the sidelines in the lineup, ready to swim out with a replacement board mid-heat, if summoned.

As with many events on the Samsung Galaxy Championship Tour, the 2015 Drug Aware Pro has a mobile option. Some 800 meters or so north from Main Break lurks a particularly nasty, intense righthand tube called The Box.

Get the Break Breakdown for Bells Beach, Australia

This spot got its name because it's so sucky it goes square when it breaks. Best in west swells from about five-to-eight feet, east winds and mid-to-high tides, The Box favors regularfooters. There is no left option here.

"We had four heats out there last year and the vision from that was fantastic," said MacAulay. "It's a great barrel."

Kerrzy's Barrel in The Box
Josh Kerr takes you inside a tube at The Box for last year's GoPro Challenge.

Margaret's has a long history in competitive surfing. This year marks 30 years of competition there, starting with the men's CT as the Swan Margaret River Thriller in 1985.

The Box got its name from going square when it breaks.

Back then, few of the world's top-rated surfers bothered traveling to the remote region for what was then called a B-rated event, opting instead to compete at the A-rated contests where the prize money was greater. But that first year, two things happened to secure Margaret's place on surfing's map: The swell jumped to 12-foot plus, the biggest ever for a World Tour event that year outside of Hawaii. And the a raging teenage firebrand, Mark Occhilupo, won the event and infused it with gravitas.

MacAulay, of course, was there.

"It was an absolutely epic event," he said. "I remember sitting on the cliff watching the Final in absolute awe. Mark Richards got a massive wave and did this gigantic swoop in the middle of the bay as the wave closed out. It's got to be pretty big to close out in the middle of the bay -- it was probably a 15-foot wave -- and MR also broke his leggie and had to swim in twice."

Big waves and powerful surfing are two elements of the competition that endure at Margaret's to this day. With massive waves predicted, both promise to be in full effect this week when the 2015 contests kick off.

JJ Jenkins is a surf industry professional and former editor of Australia's Surfing Life magazine. Follow him on Instagram @pixjj. The Drug Aware Margaret River Pro will stream LIVE at worlsurfleague.com and on the WSL App April 15 - 26, 2015.