Ohhara, Fired Up
1:06
He scored big points in Huntington Beach with moves like this. Is he ready for primetime at the Hurley Pro?

Barely a week before Hiroto Ohhara's remarkable David vs. Goliath win at the Vans US Open of Surfing, the 18-year-old surfer from Japan won a wildcard spot for the Championship Tour's (CT) Hurley Pro at Trestles in a local Trials contest. At the Trials, he uncorked fluid, powerful maneuvers on small-scale waves, solid above-the-lip game and the humble but confident demeanor of a young pro in the trenches.

His performance at that decidedly smaller hometown event was just a glimpse of what he'd pull off next. Taking Huntington Beach by surprise, he became the first Japanese surfer ever to win the US Open and, as if that wasn't enough to put him on the map, Stab posted this nugget of a clip, catapulting him to insta-fame far beyond Orange County. Before he goes up against the world's best at Lower Trestles, he and his coach, Hurley's Shuji Kasuya, teamed up to talk insta-fame, beachbreak mastery and, of course, what car he's getting -- just as soon as he passes his driver's test. Just a week before Hiroto Ohhara turned heads at the Vans US Open of Surfing QS 10,000, he won a wildcard spot for the Hurley Pro at Trestles. - WSL / Kenneth Morris

AD: Hiroto, did you see what Stab did after you won? You got a lot of new fans. What did you think of that?
HO: It was crazy! All the big guys, Kelly [Slater], Mick [Fanning], Taj [Burrow], everyone. I was cracking up.

AD: Along with your big win at Huntington Beach, you won a wildcard for the Hurley Pro in September. Is there anyone you'd really want to surf against there?
HO: Maybe John John [Florence].

AD: Where did you learn to surf?
HO: I started surfing when I was eight years old [at home in Chiba, Japan]. And then my dad took me to surf every day.

AD: When did you know that you wanted to start competing? When did it stop being something just for fun?
HO: I started doing contests four months after I started. I got fourth and thought that was pretty good. So then I wanted to win contests.

AD: What do you dream of doing, in terms of surfing or otherwise?
HO: My first dream is to make the CT. If I can make the CT, my other dream is [winning] the World Title.

Hiroto, Crane in 2013
At the HD World Junior Championship in 2013, Ohhara went up against Gabriel Medina in the Semis. Plus, fellow Hurley Pro wildcard Ian Crane made the most of windswell.

AD: Shuji, when did you and Hiroto start working together?
SK: Three years ago. Then he went to Virginia [for ECSC], and he did well. He got fifth place and then he went to do the Pro Juniors contest in Brazil, and was in the Semifinals against Gabriel Medina. He got knocked out, but he got third. From there, he automatically could get into Prime contests (now called QS 10,000, the most prestigious of the qualifying events) the next year, 2014.

AD: How would you describe Hiroto's development as a surfer from then to now?
SK: We spend most of the time not just going to comps. He stays at my house [in Hawaii] and goes back and forth to Japan and Hawaii. And in between, Australia, South Africa, Brazil and other areas. I go with him -- I think we have a good relationship. We always talk about not just surfing, more like lifestyle, everything. We go there at 5 in the morning and train for two hours. 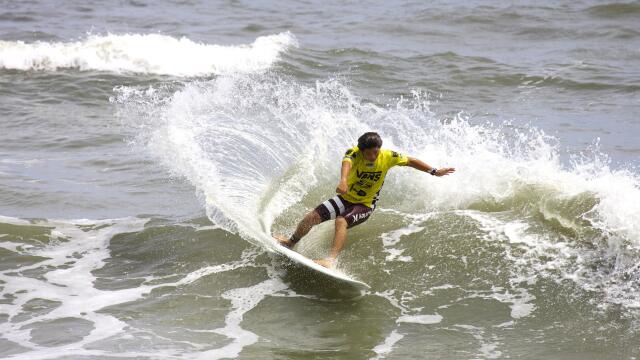 It's no wonder that Ohhara can make lemonade out of lemons in crumbly conditions: He was raised surfing at his home beachbreak in Chiba, Japan. Ohhara's father took him surfing for the first time when he was about eight, and the young Ohhara hasn't looked back since. - WSL

AD: What does mental training involve?
HO: The training is super hard, so I feel comfortable for the contest.
SK: He trains hard, so after that he feels more confidence. Mental training is more discipline -- it's hard to explain. His mental thing is the physical: The physical training will make his mental [game] that much stronger than before.

AD: We know you can surf well and we know you have a great sense of humor. What don't we know about you yet?
SK: He feels, like a lot of people, they're talking about the Olympics in 2020. Surfing is popular in Japan, but nobody's on the Championship Tour. Hiroto's one of the best guys from Japan. The reason he wanted to win the US Open was for the future, because in Japan they used to have a lot of big events back in the ‘80s, but hopefully now there will be a Prime, and even a CT event. All the Japanese surfers would be excited if in 2020 surfing was in the Olympics, in Japan. That's what everybody's talking about. There's still no guarantee. But it would be the perfect timing. Once Ohhara fell for surfing, his father took him to surf every day in Chiba. That discipline has carried over into Hiroto's young adult life; he trains at the Kamehameha school in Hawaii and considers rigorous physical training part of his mental conditioning. - WSL / Kenneth Morris

AD: What is Japanese surf culture like? What does it feel like and look like there?
SK: It's difficult to explain, but a lot of people were cheering on Hiroto in this contest, and a lot of people were looking for anybody who can get on the CT. There are a lot of people for whom that's their dream. After all the Brazilians doing well, they really want somebody from Japan to make the World Tour.

AD: Your older sister, Sari, is a professional bodyboarder. Are you two close? Did she influence you at all?
HO: Last year she got third or fourth in world, she pushes me. She's much better than me. I want to be good like her.
SK: She's always looking after him.

AD: Lastly, but most importantly, when is your driver's test? Are you taking lessons?
SK: After this interview, he's going to study! Seriously, we were just talking about it.

AD: Now that you're so famous for talking about it, what kind of car do you want?
Shibu: We were just driving by Land Rover and he said, ‘Oh, I wish I could get this car.' [Laughing] I told him, ‘Just try a Carolla, and pretend you're driving a Range Rover.'

Catch Ohhara and fellow wildcard Ian Crane (USA) take on the Top 34 at the Hurley Pro at Trestles from September 9-20. The event will stream LIVE here daily and on the WSL App.