It was an exciting Final between Cloarec and compatriot Diego Mignot (FRA), 19, in which both surfers traded big scores on consecutive set waves up until the dying moments of the heat. Cloarec's backhand turns in the critical sections of the wave earned him an excellent 16.90 combined heat total. A consistent surfer all year, Cloarec win saw him climb all the way up the regional rankings to clinch the European Junior title. "I'm over the moon right now," an emotional Cloarec said. "I never thought I could win the title here today. I've only had thirds and fifth places this season and coming here I really wanted to win an event. My main goal was to qualify for the World Junior Championship but I thought the title was out of reach. I was a little bit lucky today and I'm super happy for everything happening the way it did."

Mignot couldn't maintain his excellent rhythm into the final heat of the event and placed runner-up. Having previously defeated his cousin Nomme Mignot (FRA) in the Semis, Mignot left a door opened for Cloarec to clinch the title in the Final. He ends his last junior season on a positive note with this result, after an encouraging fifth place in Lacanau. "It's been an incredible event for me, with pumping waves just how I love," Mignot stated. "I'm a little frustrated that I didn't get better waves in the Final, and I'm super tired after those three half-hour heats, but that's how it goes. And hats off to Nelson he surfed really well."

A powerful Australian surfer, Wawn dominated the final day of action in Lanzarote and posted the only perfect 10-point ride of the entire event before clinching the crown over Nadia Erostarbe (EUK), 15.. Wawn posted big points throughout the event and especially on Finals Day. - WSL

"I haven't had much luck this year so it's good to win a contest and get some scores, some heat wins, it makes me feel really good about myself," Wawn said. "I've been spending some time in Portugal and Ericeira, getting some waves there and preparing for the World Juniors in January. I love that wave and I can't wait to compete there."

Erostarbe, was the surprise eliminator of rankings leader Juliette Brice (FRA), 16, in the Quarterfinals and advanced into her first-ever Junior event Final after defeating Keshia Seelow-Eyre (GBR) in the Semis. The young Basque native couldn't contain Wawn's assault in the Final, however, and placed runner-up. 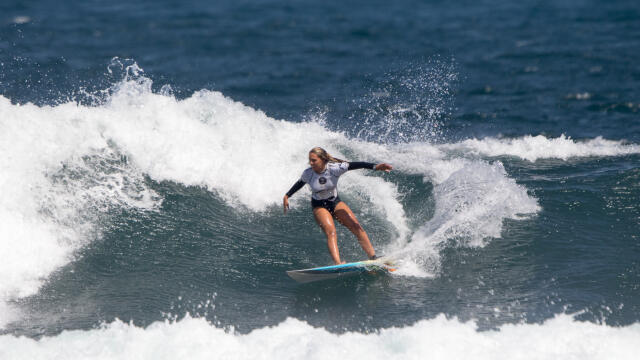 "I never thought I could make the Final here," said Erostarbe. "I had some fun in the Semis, but unfortunately I couldn't find many waves in the Final. Holly surfs so well I didn't really think I had a chance in the Final, but I'm happy I got the opportunity to compete against her. This result motivates me towards competing in next season's junior events."

Juliette Brice (FRA), 16, who lost in the Quarterfinals but clinched the European Junior Title when Teresa Bonvalot (PRT), 15, was eliminated in the Semis. The young Lacanau surfer collected an event win, a runner-up spot and two third places in 2015, her most consistent season so far in her young career. "I'm super happy," Brice said. "I wish I could have actually been surfing to win the title 'cause it's hard to watch it all go down from the beach but ultimately the pleasure is all the same. I think I put too much pressure on myself in this event and that probably didn't help."