Big wave surfers from across the globe have been savoring spectacular swells in recent months -- producing a record number of entries in the WSL Big Wave Awards -- and continuing to ready themselves for an unprecedented level of intensity during what is widely anticipated to be among the greatest winters for high surf in history.

Famously termed "too big to fail" by NASA climatologist Bill Patzert, the current El Niño weather phenomenon is among the most powerful ever recorded and is expected to wreak additional havoc around the world with exceptionally violent storms, especially over the coming winter months. 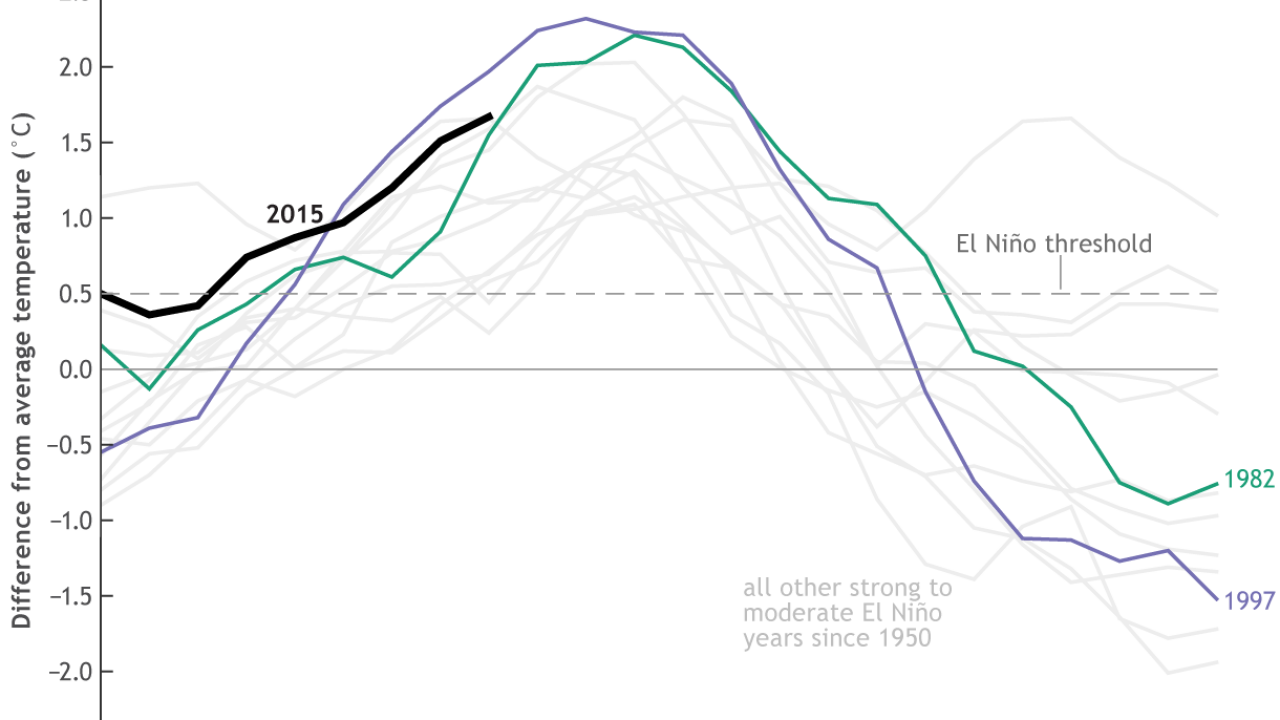 Comparison of the existing El Niño to past strong events. In short, we're in the middle of one of the strongest El Niños in recorded history. - WSL

For the surf community this superheating of the North Pacific Ocean is a source of great excitement, concern and preparation. Throughout the Hawaiian Islands and along the West Coast of North America, similar previous El Niños in 1969/70, 1982/83 and 1997/98 produced the biggest waves scientifically recorded since the sport was introduced to the world. But while those years produced many swells that were also "too big to surf" the evolution of modern big wave riding techniques and equipment has totally changed the game for participants in the WSL Big Wave Awards.

"Any veteran surfer will tell you that the three previous major El Niño seasons in modern history produced the most extraordinary big wave seasons of all time and we've all been warned that this one is of the same caliber," said Bill Sharp, the director of the WSL Big Wave Awards. "The difference is that today the surfing community has developed the capability to potentially ride any wave the ocean can produce and has been actively training to be ready for whatever does come."

Where we were 18 years ago was Wright Brothers stuff versus today's Space Age capabilities in surf of that size.

"The waves of January and February 1998 were the biggest we've ever seen," recalls Sharp, "but the idea of using watercraft to access big waves was only in its infancy and since then paddle surfing has reached another level as well. Where we were 18 years ago was Wright Brothers stuff versus today's Space Age capabilities in surf of that size. I don't think you'll find a single big wave surfer who doesn't have the sense that everything we know about the limits of both paddle and tow surfing will be heavily tested - and perhaps totally rewritten - over the next four months."

The biggest surf recorded on any populated coastline of the world in modern times occurred on January 28, 1998 on the North Shore of Oahu, Hawaii. Shore-breaking waves of 40 to 50 feet forced Oahu Civil Defense to issue an unprecedented "Condition Black" alert that closed all access to Waimea Bay and all other beach areas and caused millions of dollars in damage to coastal properties. In a pioneering moment in the emergence of the tow-surfing era, few surfers on jet skis were able to reach outer reefs and experienced waves well in excess of 70 feet on the face.

Kevin Wallis, lead forecaster at Surfline.com, has analyzed the data of these past weather events and emphasizes that while the big wave surfing community can expect a continuation of action in the coming weeks, the full brunt of the mega-El Niño will likely occur after the holidays.

"In past strong or very strong El Niño years we've seen a number of incredible storms, often back-to-back, very close to Hawaii and very close to the West Coast. Within these stronger systems we may see seas up to fifty to sixty feet - maybe even bigger than that - and we could experience some of the strongest storms we've seen in the last ten years, if not the last 30 years," said Wallis. "These storms have been known to produce incredible numbers, with hurricane force winds blowing over vast areas of the ocean.

"Typically, we would look for the peak of the swell producing activity to come in the heart of the winter, in January and February," added Wallis. "Even for surfers who don't want to ride a 70 foot wave, this El Niño is a unique opportunity as it can mean some of the protected breaks that need a huge swell to filter in will provide smaller but great waves."

Additional details about what surfers can expect this season can be accessed via Surfline's latest Official Pacific Update available here.

And while the North Pacific is just getting going, much of the rest of the world has been producing outrageous surf since last May, with the biggest waves and best rides being submitted as entries into the WSL Big Wave Awards. Leading contenders can be viewed at both the event website and Facebook pages.

1:06
As a huge winter begins to brew, submissions into the Big Wave Awards are exceeding expectations. Check out Matehau Tetopata's late drop into an impossible tube at Teahupo'o, an entry into the Billabong Ride of the Year category. Video by Tim Bonython.

Known as the Oscars of the high surf elite, the WSL Big Wave Awards honor the greatest achievements of each year in seven categories based on the photographic evidence. Open to all qualified surfers at any break in the world on any day of the year, this 16th annual edition features a huge increase in prize money for top finishing surfers (and the photographers who document them), more than doubling to $250,000 plus an assortment of TAG Heuer watches for key category winners. The Billabong Ride of the Year category alone will award over $100,000 to the top five surfers and shooters.

Among the top entries to date are rides from the biggest swells ever challenged at Puerto Escondido, Mexico and Western Australia, epic tube rides and wipeouts from Teahupoo, Tahiti and massive XXL waves produced in just the last two weeks at Nazaré, Portugal by surfers including past TAG Heuer XXL Biggest Wave Award winners Garrett McNamara of Hawaii and Sebastian Steudtner of Germany.

The WSL Big Wave Awards season runs through March 15, 2016 with the winners being announced at a gala live show to be held in Southern California in late April. The Big Wave Awards is streamed live on the WSL site and the WSL app and is otherwise presented on as a one-hour program on The World of X Games on ABC Television in the United States and on major broadcasters throughout the world including Australia, Brazil, France, Germany, Portugal and New Zealand.

Trailer: Pe'ahi Challenge
1:00
With an epic El Niño forthcoming, the remaining Big Wave Tour events all have the potential to run, including the first paddle-contest at Jaws, the Pe'ahi Challenge.

In addition the Big Wave Awards, the Big Wave Tour (BWT) has four events on the schedule for the winter months, each currently awaiting a giant swell suitable for a full day of paddle surfing competition in different locations in the Northern Hemisphere. BWT contests currently on standby include:

After winning the Todos Santos Challenge, the Tour veteran shares what he fears most (hint: it's not big waves).