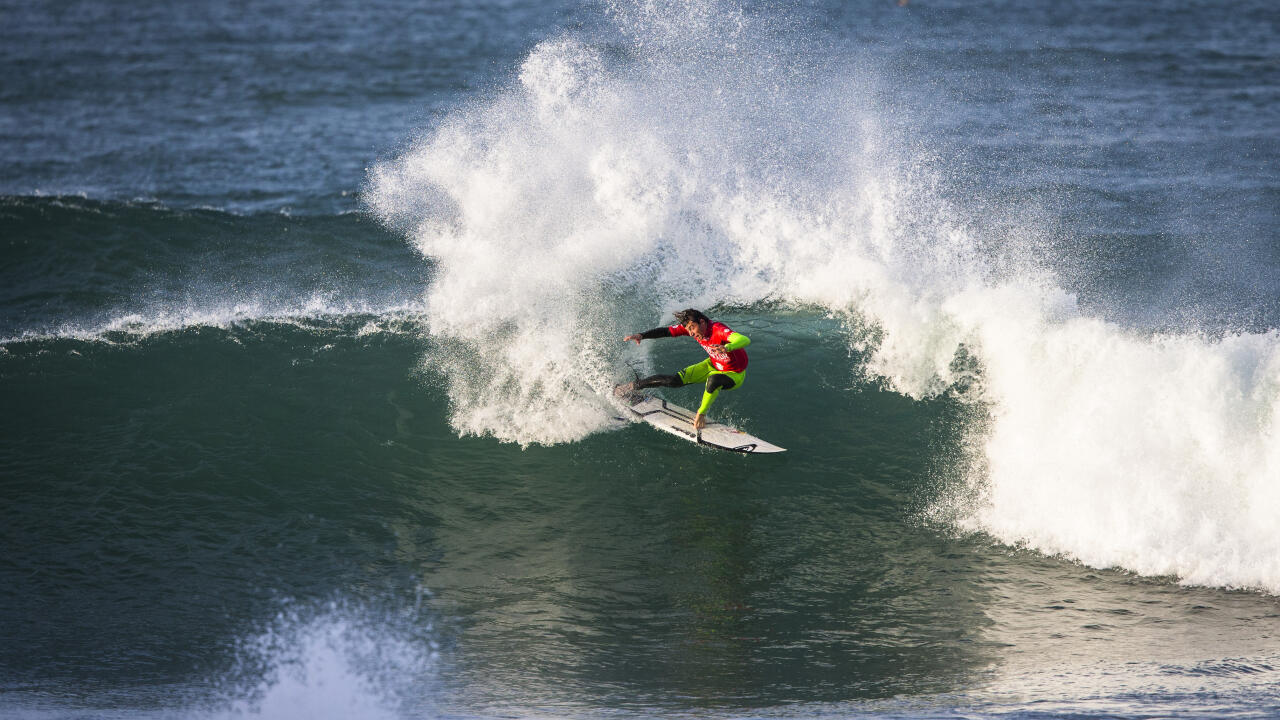 On Sunday Italy's Leonardo Fioravanti earned his career best result at the Maitland and Port Stephens Toyota Pro, finishing runner-up to CT star Matt Wilkinson at the QS6000 in Newcastle. This comes on the heels of his semifinal performance in Portugal at the Ericeira Junior World Championships in January.

Remarkably, this success is coming just one year after he broke his back at Pipeline. The injury sidelined him from competition for seven months, putting his qualifying dreams in 2015 on hold. In Australia and Portugal, he ripped his way to solid finishes in a variety of trying conditions, making his way back into the spotlight for all the right reasons. 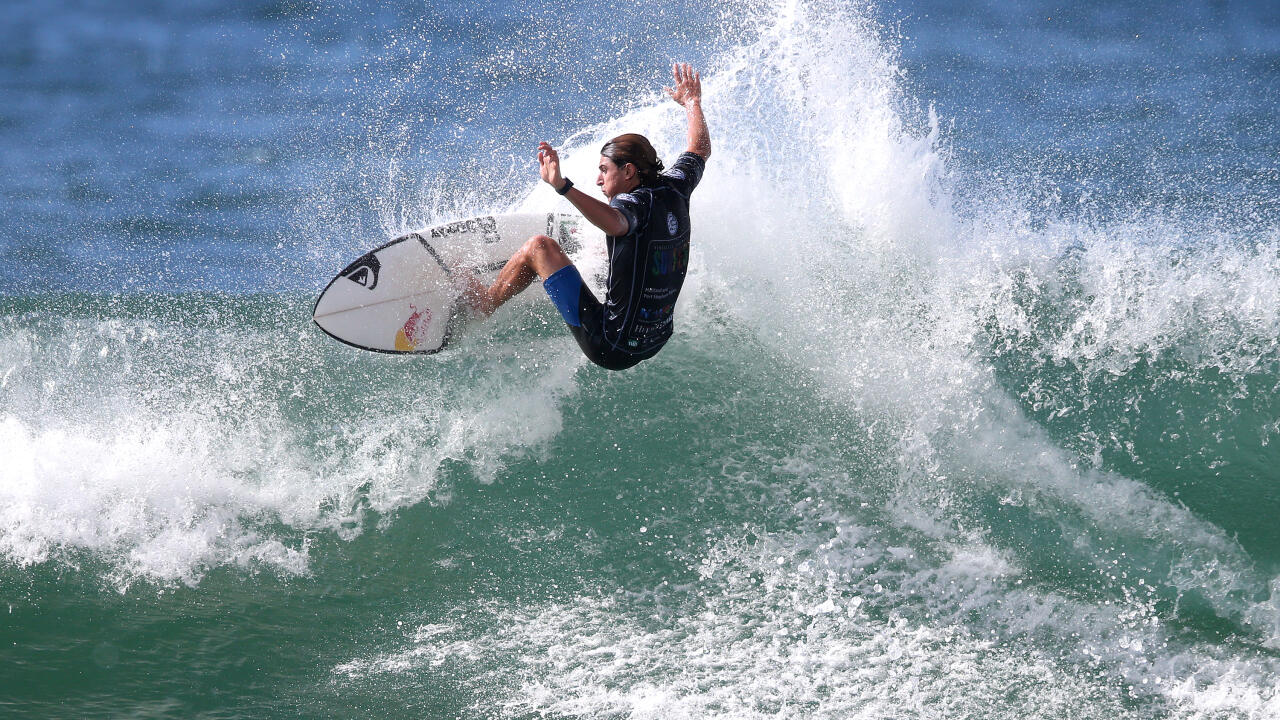 Leonardo is off to a great start in 2016 with his second place finish in Newcastle. - WSL / Sproule

Between heats in Ericeia, the upbeat 18-year-old talked personal goals, scoring waves in Italy and why where he's from shouldn't make or break his career. 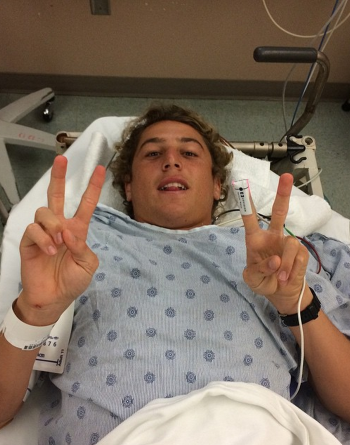 It was barely a year ago when the young Italian had a serious accident at Pipeline. - WSL / @lfioravanti

WSL: What is the biggest misconception about surfing in Italy?
LF: The biggest misconception is that there are no waves -- everybody says there are no waves. Sardinia has some of the best waves in Europe. I've scored full, stand-up barrels over there. Especially winter -- not often, you don't surf every day in winter -- but you surf enough to have fun.

WSL: How consistent is it? Say, if you're going to spend a week or two there?
LF: In winter, you'd probably surf three times a week. Sometimes more, sometimes less - you never know. Sometimes there are waves nonstop for the whole week or two weeks and sometimes you go a month and it flattens. It's the Mediterranean sea, you just never know. It's not the ocean.

If somebody has the talent to surf, no matter where you're from you can make it.

WSL: How do people in Italy react when you tell them you're a pro surfer?
LF: The surfing community knows now that I'm traveling around the world and competing on the QS circuit. Some of the guys, when I tell them that's what I do they say, 'No, we can't have any Italian surfers because there are no waves.' A lot of Italian people think there are no waves. But if somebody has the talent to surf, no matter where you're from you can make it.

The Italian
Leonardo Fioravanti, Italy's sole surfer on the Qualifying Series, made his initial impact back in 2014, when he won the Pantin Classic Galicia Pro, a QS3000-level contest.

WSL: Which part of Italy do most surfers come from and why?
LF: Most surfers come from either Tuscany or Lazio, which is the region that I live in in the South of Italy, because it's where the surf companies are. I'd say the most waves are in Sardinia, but those are where there are the most people that want to surf. On the Adriatic sea there are not many waves, whereas on our side [the Mediterranean], there are better waves.

Scoring Big in Ericeira
0:29
Despite feeling some back discomfort on land, Fioravanti feels no pain in the water.

WSL: Who were your early surfing influences that got you into surfing there?
LF: My brother Matteo has been my main influence. We started together, he got me into surfing. And watching all the videos of Kelly Slater and Andy Irons and them battling it out always made me want to surf like them. And hopefully one day I will.

WSL: Is there an "Italian Storm" on the horizon?
LF: I wouldn't say an Italian Storm, but I hope in the next few years we get more Italian surfers that start traveling and competing on the QS or even on the CT.

There are a lot of kids that surf well in Italy. It's all up to what happens after.

WSL: After your injury, how long did it take you to get back to winning form?
LF: I didn't surf for four months, and then for two months I was getting back. I had a couple surgeries to get the plates in and out, so probably six, seven months altogether, to get back to my level.

I don't think I'll ever get back to 100 percent. When I'm in the water, I'm surfing 100 percent, I don't feel anything. But on land I still feel stiff and feel something in my back that's not right. When I'm on a wave I have so much adrenaline, I'm having so much fun.

WSL: Have you adapted your training?
LF: I work a lot of my flexibility and I did a lot of rehabilitation and that helped me to get my muscles back to the strength that I had before, if not stronger now. And the flexibility is very important, I try to stretch as much as possible, when I'm watching TV or at home. I'm still trying to gain my flexibility.

WSL: Who is your favorite surfer and why?
LF: My favorite surfer is Kelly Slater because he's done so much in surfing and he's such an inspiration. I had the chance to grow up and travel with him, with Belly [Quiksilver team manager Stephen Bell] taking me around the world to see what he did and learn from him, and he and Jeremy Flores taking me surfing was huge for me and for my surfing.

WSL: Are they good mentors?
LF: Anyone is a good mentor as long as you're trying to learn what they do, and you look at what they do and you follow their steps.

WSL: What are your career goals and what are you willing to do to go after them?
LF: Eventually get on the Championship Tour and battle it out with the best surfers in the world for a World Title.