Gilmore's (Brief) Return
0:49
After missing five events in 2015, Gilmore returned to competition for October's Roxy Pro France. Despite some impressive performances there and a respectable ninth-place finish, she withdrew from the event that followed, the Target Maui Pro. Gilmore is planning for a big comeback starting this March on Australia's Gold Coast.

After her 2015 season was derailed by injury, six-time World Champion Stephanie Gilmore is rested, recharged and -- wait for it -- ready to make a run for her seventh World Title.

"I'm excited to see if I can come back and win it again," she told the Gold Coast Bulletin.

Before you jump to judgment -- missing six events is a huge absence -- take note of Gilmore's new training regime, which now includes power exercises to up her game. During her downtime, she likely took a look at the competition: Current World Champ Carissa Moore and runner-up Courtney Conlogue are known as two of the most powerful women in the water.

Gilmore Explains Injury
During the 2015 Drug Aware Margaret River Pro last April, Gilmore explained her injury and why she was withdrawing from the event. She hurt herself during a freesurf and was in fact derailed for almost the rest of the season.

"I've started working really hard, which is pretty easy to do when you just want to win again," Gilmore said. "I want to be more dynamic and explosive with my surfing. I've been hitting the gym and surfing twice every day, then I'll get a massage or stretch.

As both the oldest and one of the taller surfers on the Championship Tour, Gilmore has been known more for her fluid style and precision turns than for massive hacks and progressive maneuvers. But that might change.

"I have been working on getting into a lower position and working on endurance so I can finish the wave the way I start it." 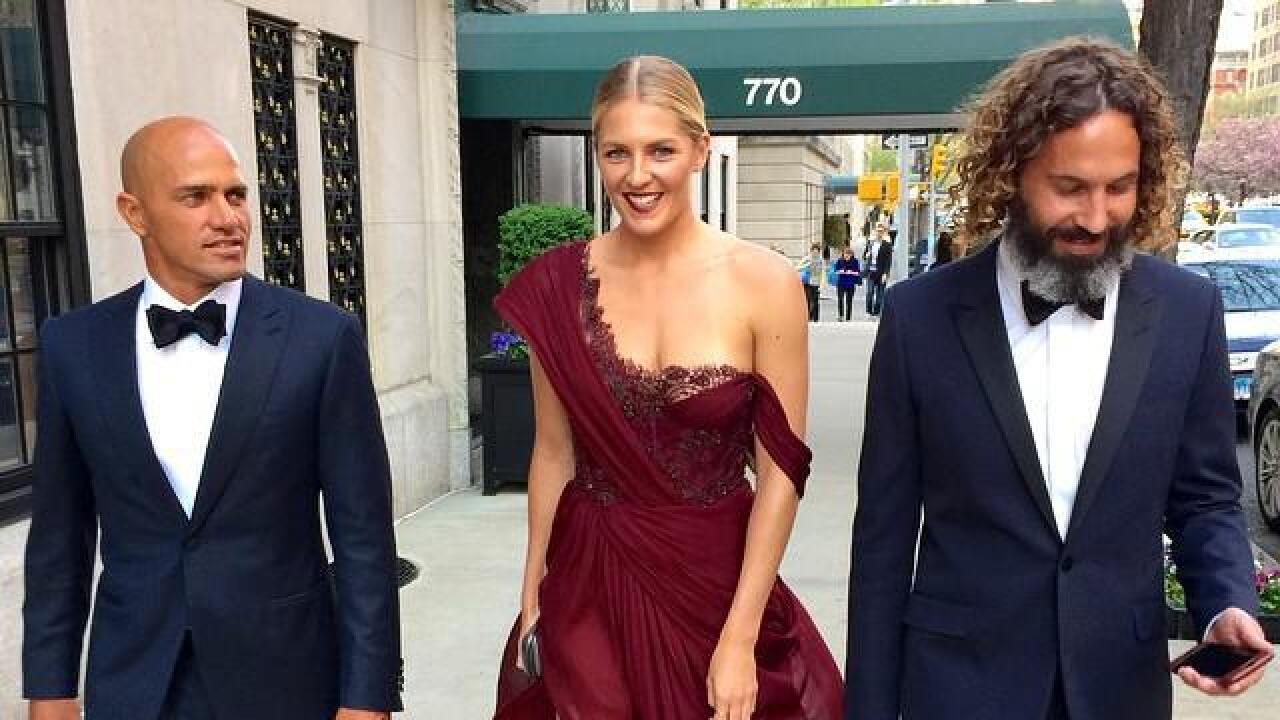 Gilmore made the most of her time out of the water, soaking up events like last May's Met Gala in New York City, and jetting to places like Paris. But with the 2016 just a month away, the six-time Champ is hanging up the high heels and getting back to work. - WSL

Gilmore, however, has been doing more than just surfing during her time off. Along with healing the fractures near her knee, she's been traveling and doing shoots for little magazines like Vogue, among others. Not to mention some star cameos. In May, she turned heads at the annual Met Gala in New York, where she looked at home in a Marchesa gown and sky-high stilettos.

Gilmore acknowledged that her penchant for high heels may have slowed her recovery, but the time off clearly nourished her in other ways. Of her recent trip to France, she said, "It made me realize that there is so much to achieve outside surfing and it doesn't define who I am."

Catch Gilmore's power-game when the 2016 Championship Tour kicks off March 10 with the Roxy Pro Gold Coast.

With options ranging from a Hawaiian step-up to small-wave round-tails, shaper Darren Handley breaks down Gilmore's board choices.

- WSL / Damea Dorsey
Sunday, March 7, 2021 Ben Collins
Today And Every Day, We Celebrate Women In Our Sport Who Are Inspiring

March 8 is International Women's Day, this is how WSL surfers are celebrating and honoring all the trailblazers around the world.