2016 Championship Tour (CT) rookie Chelsea Tuach is used to having to adapt. The youngest of four, Tuach is six years removed from the rest of her siblings. She's from Barbados where few pro surfers -- and no previous CT surfers -- are from. But being set apart has never stopped her from meeting and then exceeding expectations. Chelsea is already off to a strong start in 2016, making it to the Quarterfinals of the recent Taggart Women's Pro in Newcastle, a 6,000-point Qualifying Series event. - WSL

"I think I've had great waves to practice on," she said, explaining how growing up on the remote island may have given her an edge in competitive surfing. "Soup Bowl is pretty much consistent from summer to January and then in spring we go over to Brandon's on the south side of Barbados. I can usually surf wherever and there's never a lot of people so I can always get a lot a waves."

But Jim Hogan, Chelea's coach, thinks her drive to the elite level can be attributed to something much deeper.

"She had that look when you fall in love with surfing," Hogan said, reflecting on when he first saw Chelsea at the World Games in Costa Rica when she was 13. "Everyone else had packed up to go to the parade and she and I were the only ones in the water. I introduced myself to her mom and said, 'Keep her surfing because she's got that look.'" 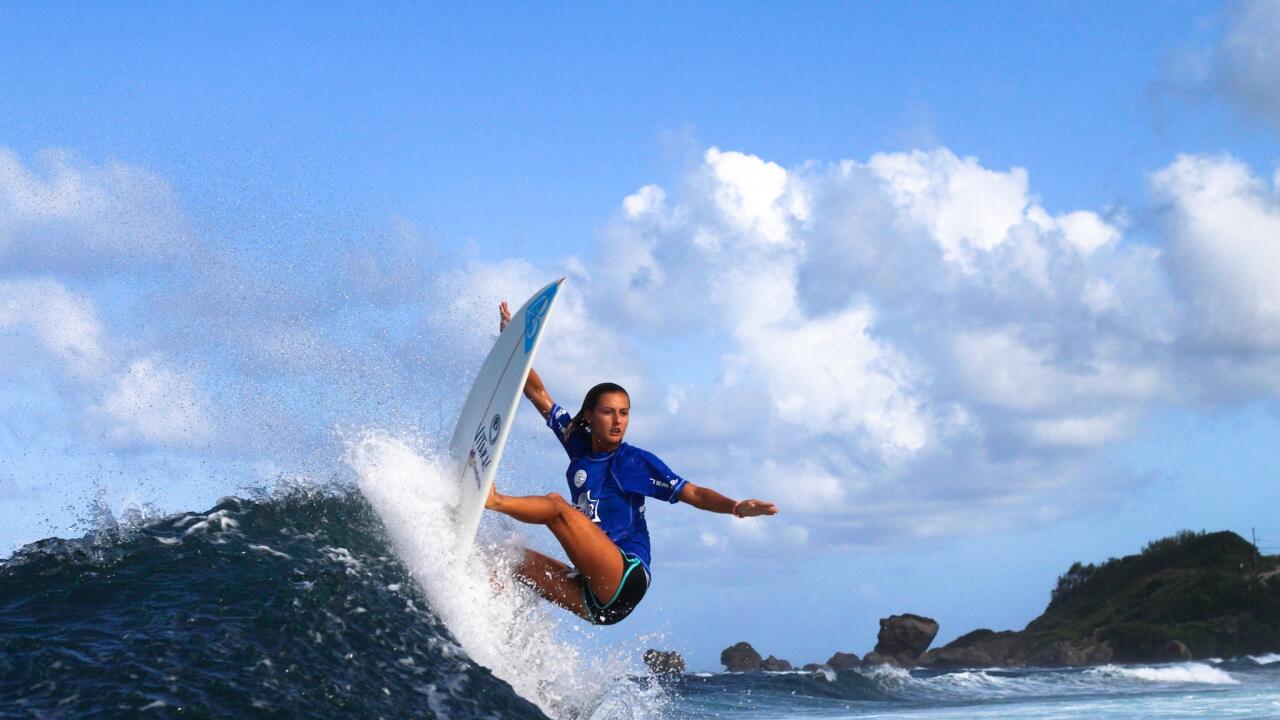 Since the, Tuach has won two North America championship titles and finished runner-up last year. But nothing's come easy. Trying to get on the CT is a grind and some of Chelsea's travel logs read like horror stories.

Her qualification run last year, for example, started in China at the QS6,000 Hainan Pro. Traveling by herself, she stalled in Los Angeles because of a visa mixup. She eventually made it to Taipei where she's delayed for another two hours because the folks in LA who had resolved the visa issue were a half world away sound asleep. THEN, she gets to her destination and what happens? She comes down with the flu. She can't eat anything but rice. She places third.

"Maybe I should get sick more often," she jokes after retelling the nightmare. Chelsea qualified for the CT following her victory at the Pantin Classic in Galicia, Spain. She says that moment was a dream come true. - WSL

But that seems to be Chelsea's M.O: She starts behind and ends up ahead. In fact, Hogan and Tuach spent the offseason going back to basics to gear her up for the elite level, getting her to stance lower and her turns more explosive. It helps that Chelsea's mother, Margot, who's taken a year off from teaching to travel with Jim and her daughter, used to judge surfing competitions. In Jim's absence, Margot makes sure to score each ride fairly to keep Chelsea's level of performance elevated. Tuach at the 2015 Hainan Pro. She was sick with the flu from the time she landed until the time she left and finished third. - WSL / Will H-S

"Since I qualified [my surfing has] gotten more intense," Chelsea said. "I'm surfing bigger and I'm learning not to waste any part of the wave. I have a lot more passion for surfing as well. I want to do well and stay on the CT for a long time so I'm working twice as hard as I ever had."

That could spell danger for the CT vets.