After a 13th and two 17th-place finishes, Justine Dupont is leaving the last few contests behind her. Her sights set are on this weekend's QS6,000 in Oceanside and requalifying for the Championship Tour. - WSL / MARENELMAR

Justine Dupont -- a former CT surfer, European longboard champ and two-time European QS champ -- lit up the first half of the Qualifying Series season and was poised for a return to surfing's main stage. She won the first event she competed in, made two other finals and finished third in the QS 6,000 in Manly. But her performances at the 6,000s in the second half of the year have been less than stellar, and now she's just on the edge at QS No. 7, the cutoff line for making the women's CT (note: the cutoff can move to lower rankings, too, depending on how the existing CT surfers do on the QS).

In this precarious position, the upcoming Paul Mitchell Supergirl Pro, which runs from July 22-24 in Oceanside, California, is a crucial one for Justine. We checked in with the 24-year-old from Lacanau, France, to hear her take on her year so far, and her mindset ahead of the event.

WSL: You've had a lot of success this season already and you're within reach of qualifying for the CT. Are you thinking about that?
Justine Dupont: In the back of my mind for sure I am thinking about it because it makes four years now that I've work to requalify for the CT. But I stay focused on one heat after one heat. I don't think about the main goal. We will see at the end of the year. WSL: How are you approaching the second half of the season, knowing you're so close to qualifying but on the edge? Do you feel pressure?
JD: The second part of the season has been tough. I think I was really unlucky in Mexico [at the Los Cabos Open of Surf]. I love the wave at Los Cabos and was feeling ready and trained in this kind of conditions. Then I missed the opportunity in El Salvador. The waves were unbelievable. I had great sessions before and after the contest but I couldn't surf at my level in my heat. 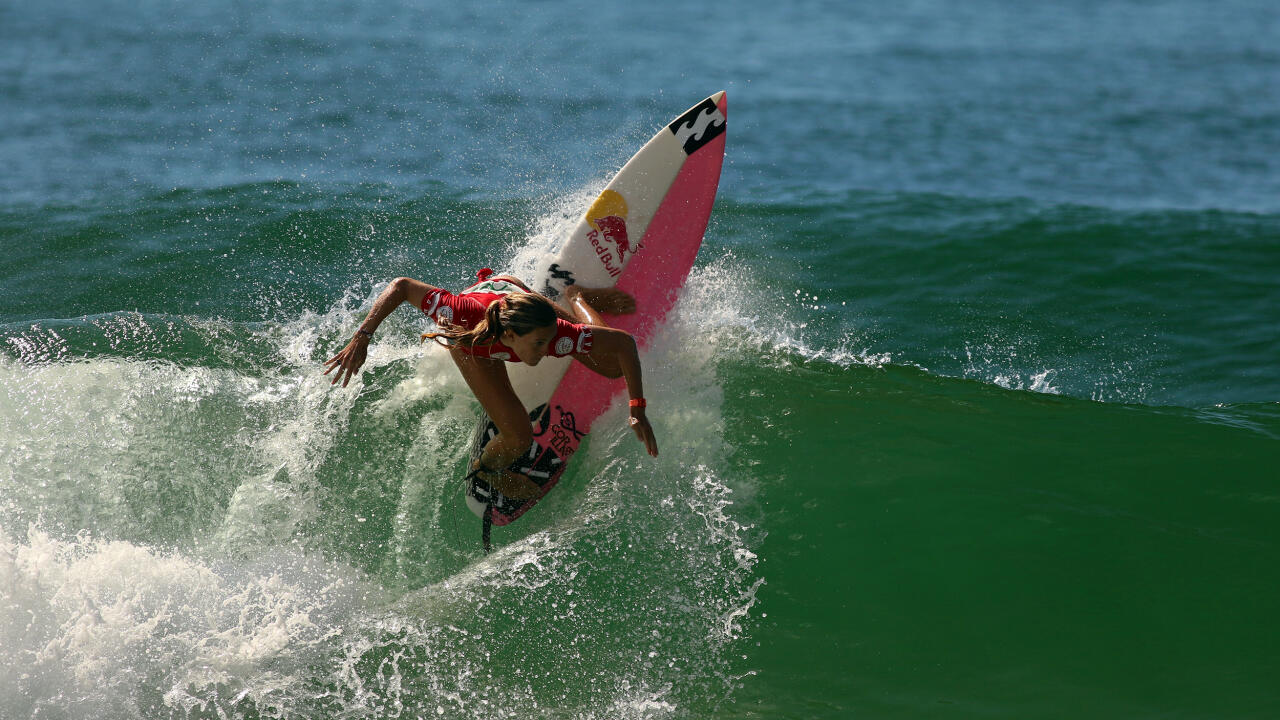 Dupont started the season with a win at the Central Coast Pro in Avoca, Australia. - WSL

The third and last part of the season is coming in one month with the two QS events at Oceanside, and Pantin [at the Pantin Classic Galicia Pro]. I am ready to give everything I have to reach my goal. For sure there is pressure. I want to stay focused on every heat I will have in my way, do everything I can to advance in each of them and we'll see at the end where I am.

WSL: Going back in your surfing career, what was life like growing up? Can you tell us about your family and upbringing?
JD: My father and my brother brought me to surfing when I was 11. All my family is really close to nature. They live in between the lake and the ocean in Lacanau. I love going back there when I have time. It's so quiet, and it helps a lot to get fresh ideas.

Life was beautiful when I was a kid I can't thank my parents enough for that. We grew up going to the beach and running in the forest. They have taught me how to love and respect nature.

WSL: Who are your coach(es)?
JD: I work all year long on my technique with Nico Fernandez. He is really passionate about surfing and training, and he is always looking for new solutions to improve my skills. Christophe Mouginot is working with me on the mental side. He is interesting and passionate about everything and it is a big help for me.

My boyfriend has been traveling with me for the QS this year. He helps me to feel like I am home. He has also been world bodysurfing champion so he knows about competing and he is helping me on that side. Dupont does some big wave surfing as well. In 2015 she made a trip to Mullaghmore Head, Ireland, where she took on the massive break. - WSL / Laurent Pujol

WSL: Is that a different cast of people than your big wave support team?
JD: For the big wave part I have great team around me. Francois Liets from Billabong is the boss of the Billabong Adventure Division. I have begun surfing big waves with him. I also train a lot with the Mangiarotti brothers, my boyfriend and all their crew (the Aqua Board-L). Alex is an amazing jetski pilot, and Guillaume a great tube rider. I learn a lot from them. They don't mind if the conditions are stormy or windy. That's when you learn the most.

WSL: What do you do for conditioning besides surf?
JD: I am training with a spearfishing club named Biarritz Chasse Ocean. Laurent, Sylvain and Stephane, the coaches, are helping me with breath-holding exercises, free-diving and pool training. It is important for the big waves. It's also great for relaxing and it's something different.

WSL: What is one thing that you always take with you on the road?
JD: I don't know if you would call swim fins surf gear but I always bring some with me to enjoy few waves bodysurfing. It's relaxing and super fun and it is a great way to stay fit. Otherwise, I also always bring books.

Catch Justine and the rest of the top women on the QS compete at the Paul Mitchell Supergirl Pro July 20-22. Watch live daily on the WSL website and app.