It's been an incredible year in surfing, and we're only halfway done. While few things match the thrill of riding waves, these stories of heartbreak, courage, celebration and victory come damn close. Warning: the following five stories contain inspiration.

Bethany's Incredible Fiji Run
3:16
A look at the wildcard's stunning performances throughout the event at Cloudbreak.

Fourteen months after giving birth to her first child, Tobias, and 13 years after losing an arm in a shark attack, Bethany Hamilton surfed in the Fiji Women's Pro as a wildcard. Not only was she surfing Cloudbreak, one of the planet's most dangerous reefbreaks, but she added another chapter to her inspirational story by finishing equal-third. She took down some of the world's best surfers along the way -- but even they were wowed. "I am stoked, even though I lost to Bethany," said Tyler Wright, who was World No. 2 at the time. "She is the greatest human."

Taj Burrow Goes Out Swinging
6:19
Surfing in the final heat of his remarkable, 18-year career, Taj Burrow put on a legendary performance.

After 18 consecutive years on the Championship Tour and two world title runner-up finishes, Taj Burrow announced that the 2016 Fiji Pro would be his last event before retirement. During the competition a week-long flat spell led to an extended poolside celebration of his career (and some of the worst haircuts ever administered), before the swell kicked in and Taj surfed the last heat of his CT run.

Sure, he lost to John John Florence, but the 38-year-old surfed one of the best heats of his long career. "I feel like I have won the world title, I am so happy," Burrow said afterward. "I couldn't pick a better way to finish my career."

Fanning's J-Bay Love Fest
6:14
The three-time World Champ sprinted into his fourth consecutive J-Bay Final with his textbook carves, and came away with the win.

It takes a special type of surfing performance to overshadow being attacked on live television by what was believed to be a great white shark, but that's exactly what Mick Fanning did at the 2016 J-Bay Open. The three-time world champion had decided to only surf select contests this year, taking a sabbatical after 2015's emotional events.

That he chose the J-Bay Open as one of those, 12 months after the attack, was brave enough. That he went on to win the event with one of the most dominating performances in recent years was a testament to both his character and his exceptional talent. "I'm stoked that I got to come back and right the wrongs that happened last year," Fanning said after his victory. "I've done that now so I can move on." 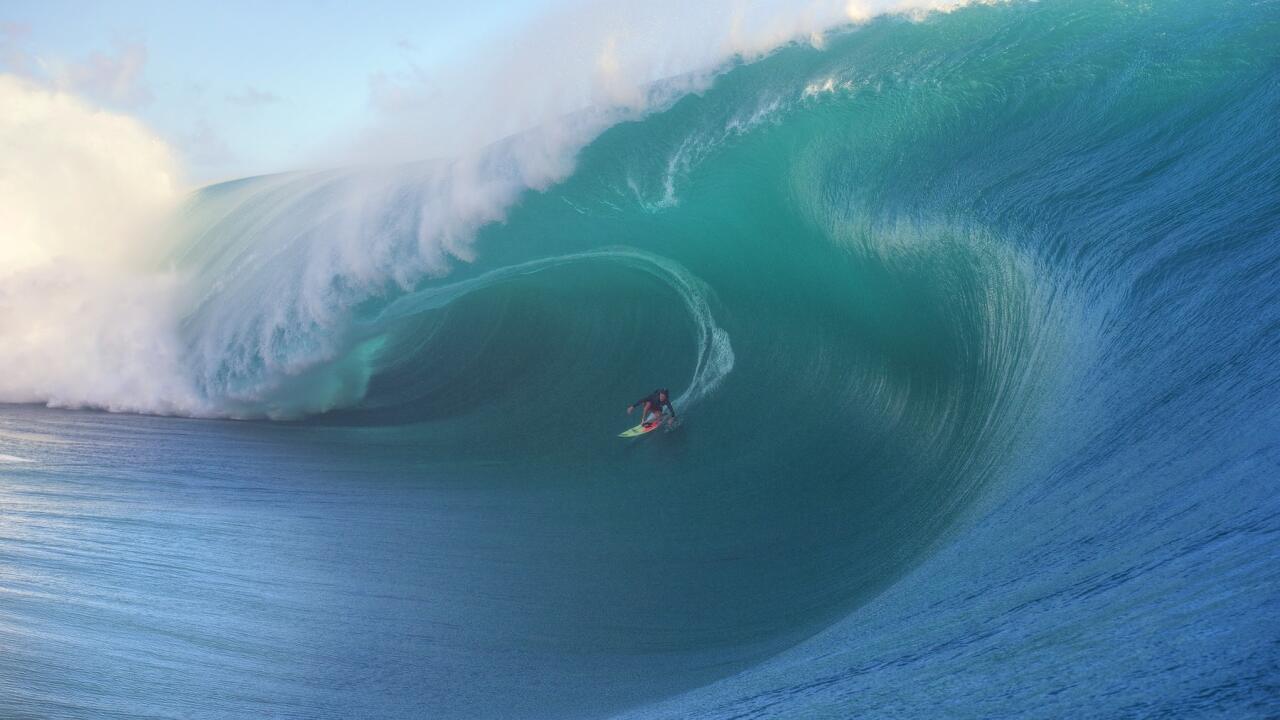 Keala Kennelly has made a career of breaking barriers, and none bigger than this year's Pure Scot Barrel Award. - WSL / Tim McKenna

When Keala Kennelly was awarded the Pure Scot Barrel of the Year Award for a massive tube ride at Teahupo'o, she became the first woman to win that category of Big Wave Award. In a 20-year, celebrated professional competitive and big wave career, this was perhaps the pinnacle and a reward for the enormous sacrifices she has made. Back in 2011 she had gone head-first into the reef at Teahupo'o and suffered a gash from her hairline to her chin that required more than 50 stitches, yet she went back to the wave that nearly broke her.

"I was told that women can't surf," Kennelly said when winning her award. "I was told this about getting barreled, surfing big waves, surfing Pipeline, paddling in at Jaws, and the list goes on. Who I really want to thank is everyone who told me you can't do that because you're a woman. Because that drove me to dedicate my life to proving you wrong -- and it's been so damn fun." During a freesurf at Pipeline last December, Evan Geiselman wiped out and suffered a three-wave hold-down. Bodyboarder Andre Botha found him floating face down and unconscious and it was Botha's courageous rescue and the resuscitation efforts of the lifeguards that saved Geiselman's life. He was rushed to the hospital in critical condition and even though he made a full recovery, he was left questioning his career choice.

Less than six months later, though, Geiseleman's decision to continue competitively was justified when he won the 6000-level Qualifying Series contest, the Ichinomiya Chiba Open. "After what happened at Pipe I'm so lucky to be surfing at all," he told the WSL afterward. "So to win the biggest event of my career here in Japan is amazing."