Day 3 Highlights
2:28
Competition unfolds in amazing surf at the iconic pointbreak and advances through the rounds for both men and women on Day 3.

Riyue Bay on the Island Of Hainan in China has continued to serve up pumping waves for Day 4 of the 2016 Jeep World Longboard Championship presented by Wanning. Competitors gorged on clean 3-to-4 foot waves all day to complete Men's and Women's Round 3.

The first heat of the day featured Brazilian Longboarding prodigy Chloe Calmon. Calmon dominated the heat posting a 9.00-point ride (out of a possible 10) early. The stylish natural footer progresses to the Quarterfinal and one step closer to the World title that has eluded her for the last few years. "The waves are really good today it's the perfect size for Riyue Bay," Calmon said. "It was nice to post a few good scores, that 9.00 felt amazing. I try not to think about how close I have come to winning this event in the past. This is a new year and a new contest so I just focus on what is ahead for me."

Heat 2 of Women's Round 3 had masses of attention as reigning World Champion Rachael Tilly went into battle with young Hawaiian Honolua Blomfield and former World Champion Lindsay Steinriede. Tilly was slow to get going but eventually found her rhythm and posted to excellent single wave scores with long nose-rides through the critical section. Her heat total of 16.67 (out of a possible 20) was unattainable for Steinriede and Blomfield with Blomfield finishing in second to also progress into the Quarterfinals. Rachael Tilly was in rhythm with the ocean in Round 3. - WSL / Tim Hain

"I knew I wasn't safe in that heat until the final hooter had gone," Tilly said. "Both of the other girls are serious competitors so it could have been anyone's. The conditions today are so good. I paddled out a dark for a free-surf but it was so busy so I had been really excited for that heat just to get out there and get some sets. I hope these conditions can continue."

The biggest upset of the Women's Round 4 came when Tory Gilkerson posted the highest heat total of the Round, a 16.93, to overcome 2014 World Champion Chelsea Williams and two time World Champion Kelia Moniz. Gilkerson had to put her idols to the side and treat the heat as if it was any other. She continued to put on one of her more memorable performances. Moniz progresses in the second qualifying spot whilst Williams has been eliminated from the contest. Tory Gilkerson was seriously impressive during her Round 3 heat win. - WSL / Tim Hain

"I've looked up to those girls for so long so it is definitely nerve racking having both of them in a heat together," Gilkerson said. "I tried to treat that like any other heat but it definitely would creep into my mind who I was coming up against. Even though I had two solid scores I was never confident that I had the heat in the bag. The other two can post perfect scores at the drop of a hat so it was hard to stay focused."

Heat 5 of Men's Round 3 was the most anticipated of the event so far with Two Time World Champion Harley Ingleby coming up against France's style-master Antoine Delpero. Delpero controlled the heat until the dying minutes when Australian Ingleby took the lead. With only seconds to go, Delpero took off and went to work, riding the nose and carving stylishly. He earned the score and moved into first, but only momentarily, as Ingleby was behind him hanging-ten for what felt like an eternity. The judges loved Harley's commitment to the nose ride and awarded him an excellent 8.37 to win the heat. "That was such a gnarly heat," Ingleby said. "Coming up against Antoine so early in the contest was crazy as he is always a favourite to win the championship. I was struggling to find the sort of wave I wanted all heat so it really came down to the last exchange. I heard his score first and was gutted but then heard mine and am over the moon. The close heats are always hard but it's great when you come out on top."

After entering the event late as an alternate, Thomas King was stoked to have made it to Round 3. That was until he came up against Reigning world Champion Piccolo Clemente. Clemente wasted no time dropping two excellent scores early in the heat to put King in a combination situation. He then continued to increase his lead dropping the first perfect 10-point ride of the event as part of his heat total of 19.80. Clemente's near perfect heat total is the highest of the event so far. "The waves are pumping today, it is amazing to have waves like this for a competition," Clemente said. "As I said earlier, this wave is similar to where I have been training so I feel confident to pull the moves I do on a wave like this. I definitely have a lot of confidence after that heat, posting the scores I did feels good."

Heat 8 of Men's Round 3 was an all Hawaiian affair with nose-riding extraordinaire Kai Sallas taking on Ned Snow. Sallas meant business taking off on sets and moving straight to the nose through the most critical sections of the wave. Sallas' aggressive yet poised nose riding saw him take the heat with a solid total of 18.16. 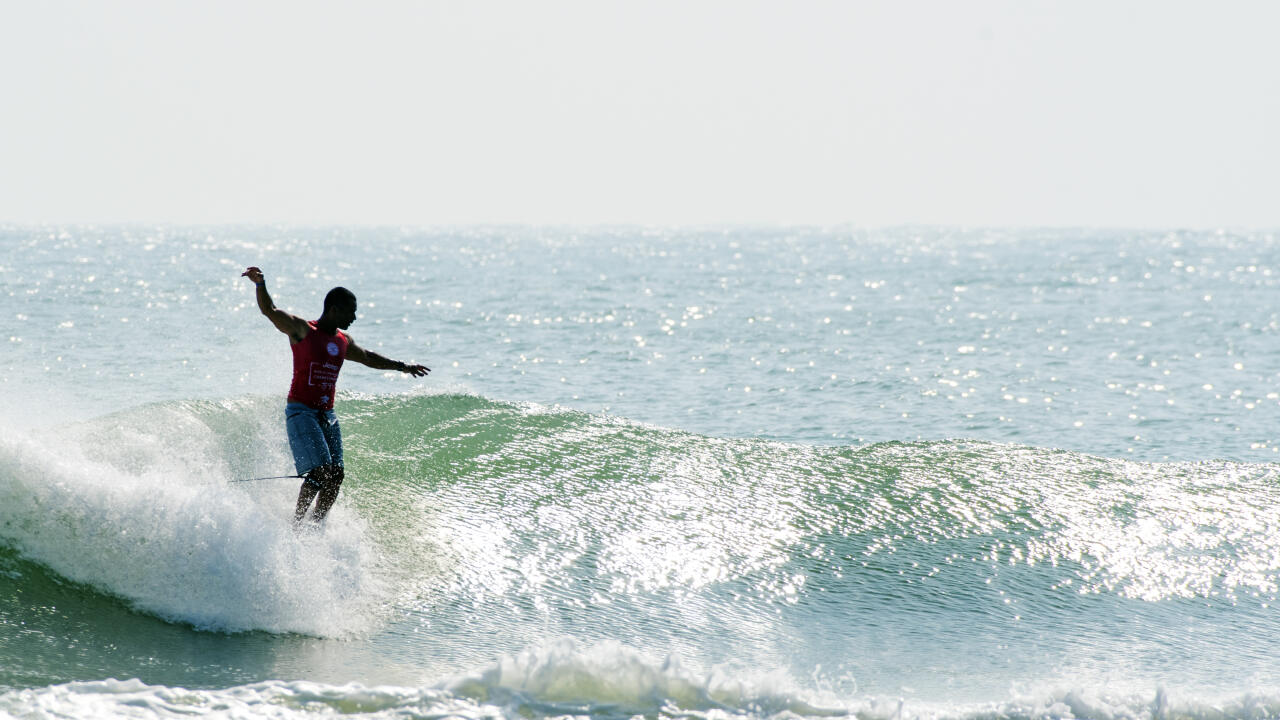 "I was studying all of the heats before mine and new what I needed to do," Sallas said. "I could see that the judges were rewarding the surfers who were taking the set waves and getting to the nose through the biggest most critical section of the wave, so that's what I did. Nose riding is the best feeling in longboarding, it's like walking on water." Chelsea Williams' departure from the draw in Round 3 was a shock to everyone. - WSL / Tim Hain Kelia Moniz will surf in the Quarterfinals. - WSL / Tim Hain Nava Young through to the Quarterfinals. - WSL / Tim Hain Alice Lemogine made it to the Quarterfinals. - WSL / Tim Hain Honolua Blomfield will surf in the Quarterfinals. - WSL / Tim Hain

Congratulations Tatiana Weston-Webb on clinching a spot in the WSL Final 5! See you at WSL Rip Curl Finals!

A Strong SW/SSW Pulse With Potentially Favorable Winds Is En Route To Hit Thursday, Building Throughout The Day And Lasting Into Friday