In Ezekiel Lau's very first do-or-die heat on the Championship Tour (CT), he couldn't have asked for a bigger initiation test. He was matched up against Filipe Toledo, the 2015 Quiksilver Pro winner, a perennial event favorite, and World Title contender. But Zeke adapted to the tricky conditions, and surfed with his usual dose of power and flair. After taking the lead, he dominated the priority chess match at heat's end to lock down his first big upset win in Round Two.

Zeke Lau's 10-Point Entrance
4:24
The Hawaiian rookie pulled a massive upset, and scored a perfect 10 in his CT debut.

In Round Three he drew Jordy Smith, another event favorite and World Title contender. As soon as the buzzer sounded, the matchup became an instant classic. An hour after a massive rain squall that tore the lineup apart, huge gaping barrels were peeling off the rocks with sheet-glass perfection.

Wouldn't you know, Lau opened up his account with an incredible 10-point ride -- a huge standup-barrel-to-turn-combo -- and kept Smith on the ropes up until the very end. Zeke would also learn a valuable lesson. Needing an 8.5 to turn the heat, Smith got his own incredible tube to survive Lau's brilliant challenge and take the win. 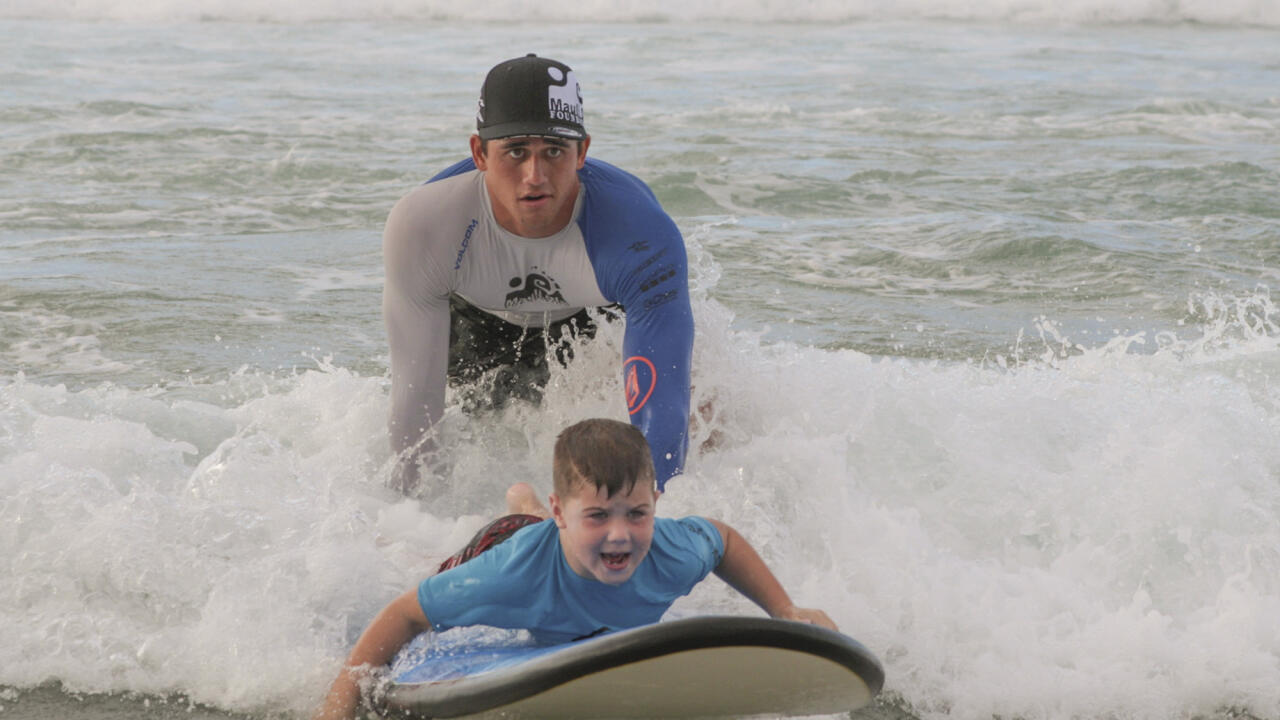 Zeke's rookie ambitions are only matched by his desire to give back. He jumped at the chance to give kids with cystic fibrosis a day they wouldn't forget during his stay on the Gold Coast. - WSL

Regardless, it was a hell of a way to make an entrance. Zeke tells us about what was going through his mind that very first CT event and who he's got his sights on to challenge.

WSL: Talk to me about that first event. Were you nervous, psyched, all of the above….?
Ezekiel Lau: Honestly, I don't know what I was feeling. I was mostly just trying to keep myself calm. The morning of my first heat I woke up and the swell had picked up so I knew it was on. I just thought to myself, 'Well, here we go.' I told myself to just embrace every bit of it and enjoy it. Just take it all in and be totally in the moment. That kept me from feeling overly nervous or anxious, I believe. But I think I felt a bit of nerves once I was on my first few waves.

Beating Filipe Toledo. Were you nervous going into that heat with an event champion like him? How did you keep your composure and surf such a smart heat?
Coming up against Filipe I was excited. I mean, this is why I want to be here. I wanna have a chance to go at the big names. My coach, Jake Paterson, and I made a very strong game plan and I stuck to it. I knew exactly what I had to do and executed. I still didn't feel like I exactly surfed the best in that heat, but the game plan was solid.

How different did those CT heats feel from the QS heats? Very, or not so much?
All of those heats were very intense. Every heat on the CT felt like the Final of a Triple Crown event. The environment and energy were through the roof. I felt like everything was going 100 mph. While the foundation of Zeke's surfing is power based, it's filled with variety. - WSL / Ed Sloane

Wow. So, what about your perfect 10 wave…Did you think that was a 10 coming out of that barrel, or was that unexpected?
The 10! [Laughs] Well, I was actually on my way back out from another wave and was trying to regain first priority before Jordy got out. Going back out on the ski I could see the set coming and it looked like it was the biggest set I had seen that afternoon. So, I was just trying to calm myself down and breathe. Then Jordy got back out the back with me and the set came. I let the first one go and the next one looked like it was a huge closeout and all I could think was, 'This is the one!' [Laughs]

Zeke Lau's 10-Point Entrance
4:24
The Hawaiian rookie pulled a massive upset, and scored a perfect 10 in his CT debut.

Then everything just went silent and I was just totally embraced in every second of that moment. But when I got the barrel and came flying out I knew for sure it was a huge score and that I was headed to the lead. When I heard them say 10-point ride, I just smiled and tried to play it off sitting next to Jordy!

So, what did you learn from that loss, though, to Jordy in that heat?
I learned that this is the Big Leagues. They don't flinch at big scores. They fire right back without hesitation. And that is exactly what happened there in the end.

Lau vs. Smith in Round Three
12:59
Jordy Smith vs. Ezekiel Lau

What's your plan of attack at the next event?
Same mindset for Margies! I'm gonna go out there with a solid game plan and take down some big names.

Anybody in particular that you're excited to surf against soon?
Kelly! I wanna surf a man-on-man with Kelly. He said this could be his last year so if it is I just wanna say that I beat him in a man-on-man heat before he retires! [Laughs] So, who impressed you the most at the Quik Pro Gold Coast?
Medina really impressed me. He hurt his knee in our first round heat and got carried up the beach. But he showed up everyday for his heats and was surfing on another level and made the Semis.