It's that time again. Time when the world's best converge on the world's most renowned righthand pointbreak of Jeffreys Bay. This wave tends to separate the best from the rest like no other. There's no room for the timid. Its speedy walls are unforgiving, and any weaknesses in approach gets magnified. Those who have well-rounded approaches tend to do best here. Bet against Mick Fanning at your own peril. - WSL / Kirstin Scholtz

Going into event #6, Tier A has many faces you'd expect to see towards the top of the leaderboard. If you like to lean on past success at this event, Jordy Smith and Joel Parkinson are tough to avoid. Both own two wins, although Jordy has done it in eight events surfed, to Parko's 15. They both live in the Top 5 on Tour for Average Heat Score and Heat Win Percentage. This was also the location of each of their first wins on the CT, Parko winning as a wildcard in 1999. Jordy's coming in hot off his win at Ballito too.

But if you like to lean on recent success then the current Jeep Leader may be your man. Matt Wilkinson has proven last year's Title chase was no fluke and although his current track record at J-Bay isn't elite, he did hammer his way to a 3rd place finish the last time this event scored epic waves in 2014. One interesting stat however is, his AHS for the year is 12.76, good for 24th place. Not the number you might expect for the ratings lead. For the second year in a row Matt Wilkinson will be wearing the yellow Jeep Leader jersey at J-Bay. - WSL / Kirstin Scholtz

Although he's had a couple dud events in Brazil and Fiji, John Florence did make the Final last year and looked sharp while doing it. He has four Excellent Heats in only 9 career attempts. By far the highest clip of any surfer in this event's history, and with much more to prove.

Tier B continues to bring major fireworks and the grand finale looks to be Mick Fanning yet again. Let's list his past four J-Bay results here, just for fun: 1st, 2nd (called due to shark attack), 1st, 2nd. Not to mention his all-time leading HWP of 81% and 15.51 AHS which comes in as a close second to only… John John Florence has been showing flashes of brilliance at J-Bay for years, but his best result came last year with a runner up to Mick Fanning. - WSL / Kirstin

…Kelly Slater of course. Unsurprisingly, Kelly has dominated South Africa over his career, winning a record four times, tied with Mick. The difference is, Slater has surfed in five Finals to Mick's seven and wasn't attacked by a shark in any of those. The bummer is, Kelly hasn't made a Final since 2008 where he comboed, you guessed it, Mick Fanning.

Jeffreys has not been especially kind to goofy footers over the years with Mark Occhilupo being the sole event winner, but Gabriel Medina is one dangerous man. He's currently outside of the Top 10 and in desperate need of a result to keep his dreams of a 2nd World Title alive. Luckily for Gabby, J-Bay has never seen him place outside of the Quarterfinals. 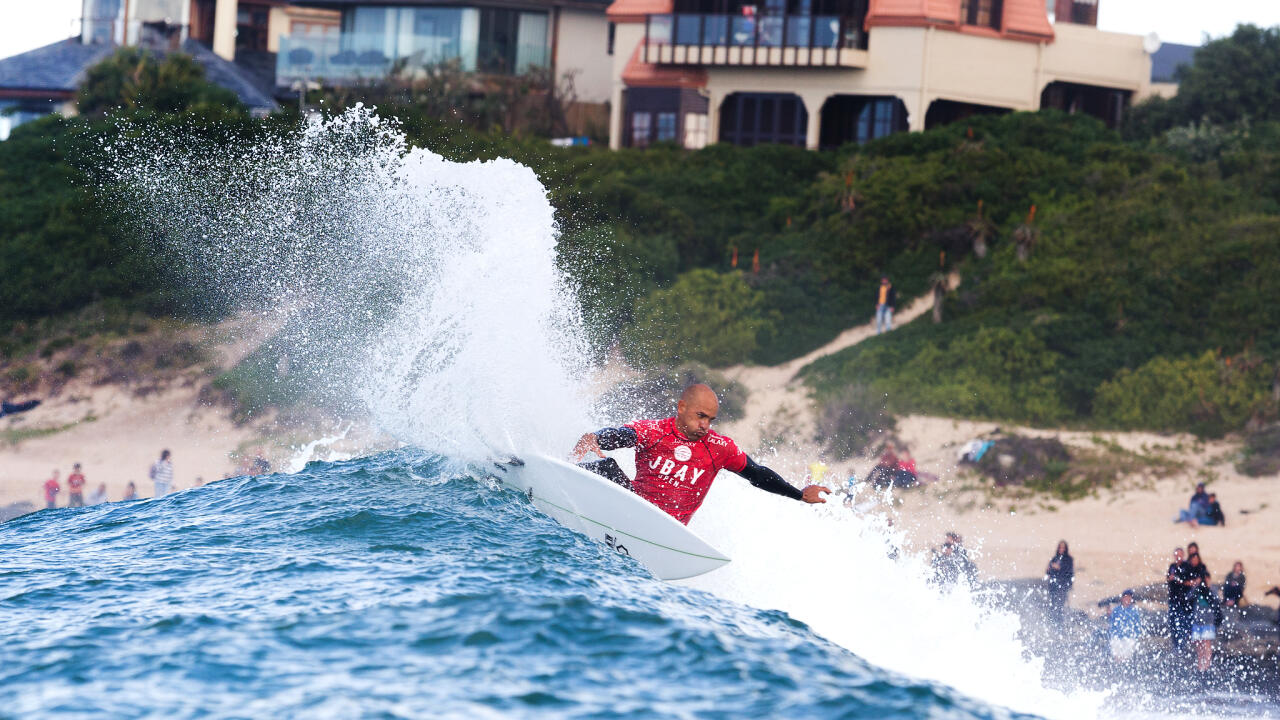 Kelly Slater is a 4x winner at J-Bay. That's the only real piece of information you need on him. - WSL / Kelly Cestari

Another sneaker for the goofies could be Wiggolly Dantas. Wiggolly has the 7th highest AHS of anyone over double digit heats surfed. He also owns four Excellent Heats so far this season, which is 3rd most in this bracket to only Caio Ibelli (7) and Filipe Toledo (5).

Speaking of Filipe Toledo, he's back after serving his one event suspension and every year he's surfed this event has improved his placing. From 25th, to 13th, to 5th last year, the arrow is always pointing up. If air wind has anything to do with it, you might as well start zooming the webcast cameras out right now, because it'll be tough to keep him in frame. 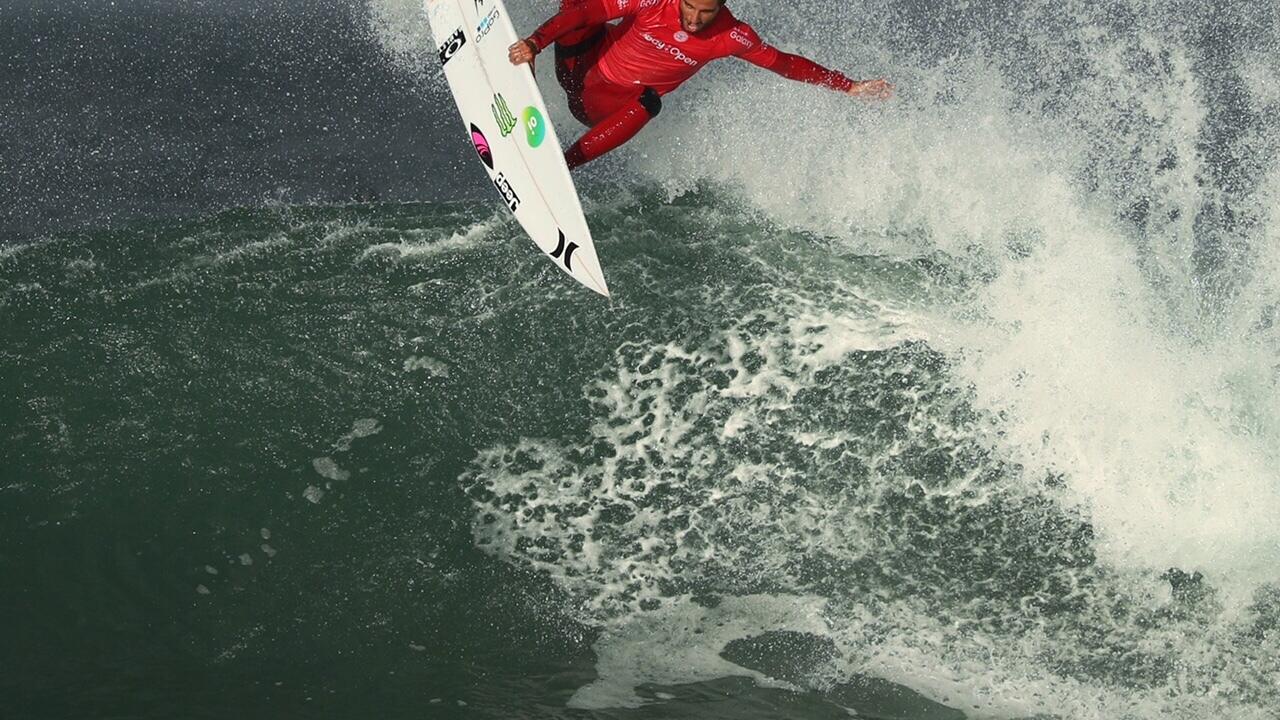 Filipe Toledo's flashy performances have made him a huge hit in J-Bay, and he's dangerous in any condition. - WSL

With the way things have been going this year, nothing should surprise you, so Tier C is one to be taken seriously. These guys are frothing at the bit to get out of the CT version of a doghouse and will do anything it takes after a cold hard look at the QS ratings following the first 10k event of 2017. Pressure is on, or off, depending on how they view it.

It'd be pleasing to the eye if Conner Coffin could make something happen. He's dropped a plethora of video clips that prove he's one to take seriously. At this point it's a, "We'll believe it when we see it," approach. The talent is there, but so far, Conner lacks consistent performances on the big stage. He isn't breaking into the top 25 in any major statistical category this year. A pick based off the past may lead you to Josh Kerr. He's only won a single heat in 2017 but J-Bay's history tells a different story. Maybe it's growing up on a right point at Snapper but Josh does not have a 2nd Round exit in this event dating all the way back to 2009, and owns a HWP tied for 11th which is easily the best of anyone in this bracket.

Has Leo Fioravanti finally found his confidence? It sure looked that way in Fiji where he handily took down Ace Buchan and John Florence on his way to a Quarterfinal result. That brings him out of the cellar and into a slightly higher seed which will mean relatively easier matches, leaving others to deal with the top dogs. Wildcards at Jeffreys Bay have a history of doing some serious damage. This year's local threats are longtime J-Bay standout Dale Staples and Michael February, the current No. 4 on the Qualifying Series. - WSL / Kelly Cestari

Part of those "others" would be the Local Wildcards. They have almost impossible footsteps to follow considering legendary giant killer Sean Holmes used to haunt World Title contenders dreams on a yearly basis. That task is now left to Dane Staples and ultra-hot Michael February who closed out the South African QS season with a 3rd place in Ballot and now sits at 4th overall on the ratings. They have a tough task ahead but history tells us that anything is possible.