"It went from an injury to the real possibility of drowning," Australian big-wave surfer Jamie Mitchell told Surfer Magazine after a recent wipeout at Puerto Escondido. "This was probably the most scared I've ever been for my life. This wasn't a fire drill. This was the real deal." As surfers continue to push the big-wave boundaries of the sport, injuries and near drownings will always be a possibility. Mitchell was rated as the World No. 5 on the Big Wave Tour (BWT) in 2016 and the former paddleboard champion has proven himself as a standout at all the premier big-wave breaks like Pe'ahi, Mavericks, Puerto Escondido and Nazaré. In this instance though it was a relatively small wave, "only" six-to-eight foot on the Hawaiian scale that caused the predicament. To put that in perspective it was more than half the size of some of the waves he rode on the way to a 9th place in last year's Puerto Escondido Challenge.

Mitchell pulled into the tube, but couldn't make it out. A normal wipeout went pear-shaped when his 9'0" board hit him in the chest and broke his sternum. Barely able to breathe, caught in the impact zone and unable to call or raise his arm for help, he spent a harrowing ten minutes going over the falls on waves so that he would get pushed to shore and safety.

Just a few days prior another BWT surfer Koa Rothman was also lucky to be alive after being hit in the face by another surfer's board whilst surfing an isolated Southern Hemisphere outer reef. "Don't know if you'd call it unlucky or lucky... but I walked away from this accident with only a few broken teeth, a sprained neck, and a really bad headache," Rothman captioned his Instagram post and video of the incident. We'd say it was a bit of both; unlucky to be hit in the head and forced to swallow your own teeth, but lucky to be alive after what he later called "the worst wipeout of my life."

Meanwhile, down in Brazil, Lucas Chumbo Chianca, the newest member of the Big Wave Tour, fractured his left ankle last weekend while trying to stick an aerial move. During surgery doctors put placed four pins in his ankle that will leave him out of the water for at least a month. 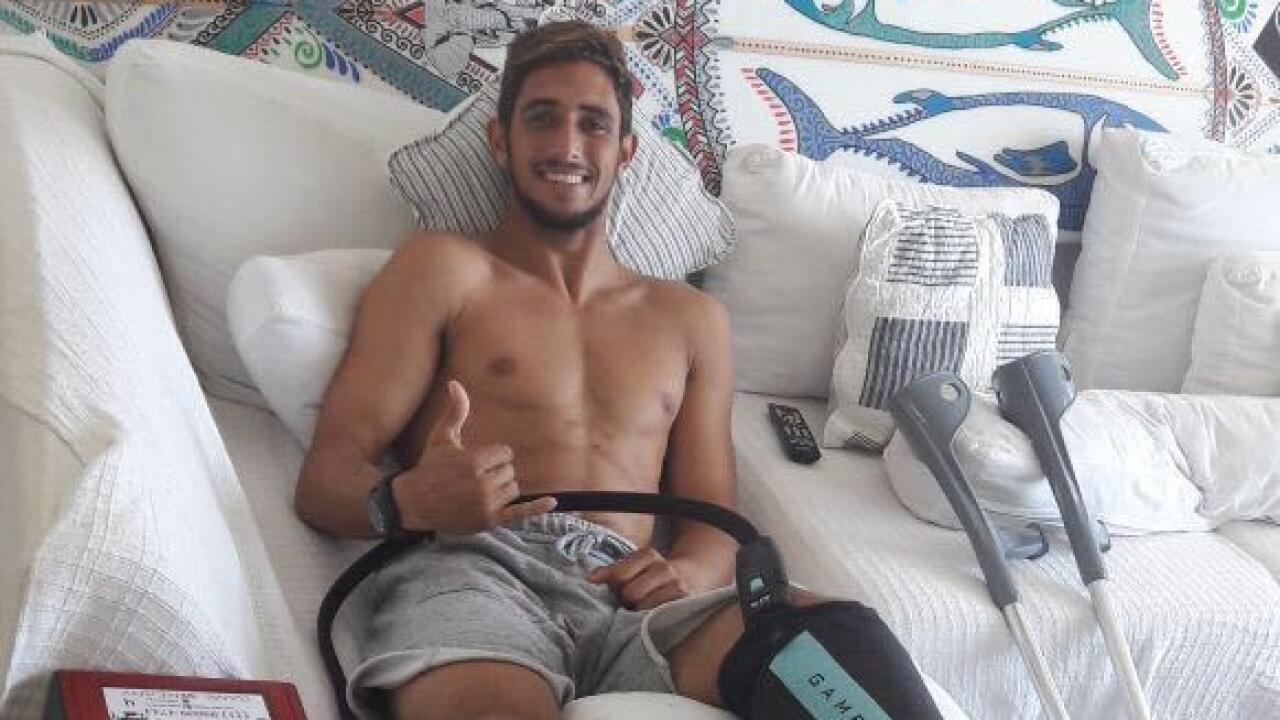 Lucas Chianca will be sidelined for at least a month after breaking his ankle. - WSL

Going back a little further, big-wave surfer Mark Mathews suffered a potential career threatening injury when he was thrown onto a shallow reef in Australia in February. He tore a major artery in his right leg, dislocated his knee, suffered severe nerve damage and snapped both his anterior and posterior cruciate ligaments. For three days he was in real danger of having his leg amputated. Mathews had only been back in the water a few weeks after suffering a severe shoulder injury freesurfing Jaws before the first Pe'ahi Challenge.

The cases keep stacking up. The UK's Tom Butler, one of the most experienced Nazaré surfers, suffered a horrendous wipeout whilst competing in last year's Nazaré Challenge. Doctors had to use plastic surgery to reattach his ear and drain air and fluid from his chest cavity. At the Pipe Masters in 2015 Bede Durbidge broke and displaced his pelvis in a shocking wipeout, which required the insertion of a seven inch rod and metal plate with four screws in his pelvis. In the past two seasons big-wave surfer Kalani Chapman and Floridian QS competitor Evan Geiselman were both found unconscious after Pipeline wipeouts and only the quick actions of fellow surfers saved their lives. The wipeout that had Tom Butler almost lose an arm, a leg... and an ear. - WSL / Guillaume Arrieta

Now we don't want to overplay the threats involved in surfing. It is however worth noting the risks taken in pushing both themselves and the sport. It may look easy, but these are elite professionals that are often putting their lives on the line. It's also worth noting that in every case, the surfer's response has been the same. They simply focus on the recovery to make sure they have the least amount of time out of the water.

"Glad to have some solid friends by my side today and what else can you do but laugh?" Mitchell posted on Instagram after his Mexican misadventure. "Although laughing hurts like hell. I'm off to California tomorrow to get some more X-rays and another opinion then straight into rehab! I'll be back before you know it." Now that's the real deal.