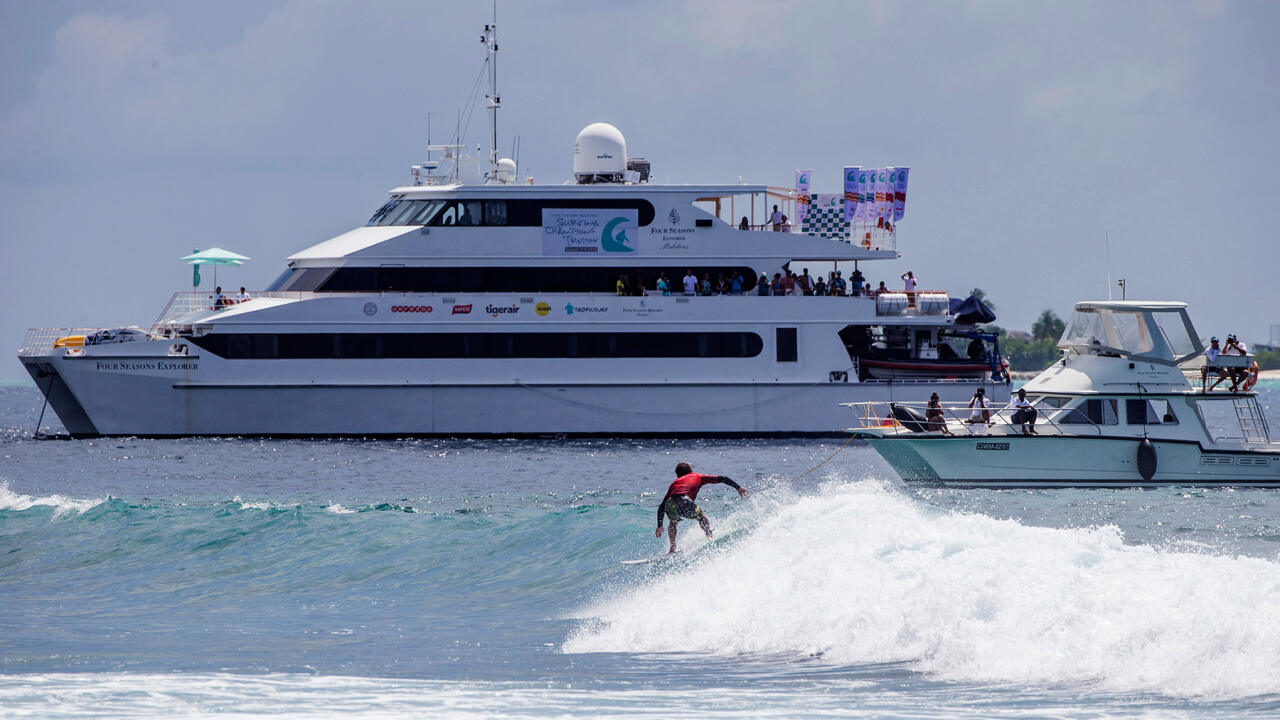 The Four Seasons Explorer is the so-called mother ship during this WSL Specialty event and is the perfect place from which to watch the action. - WSL

Residing on the North Shore of Oahu Hawaii, Ross Williams is a surfer whose incredible style and power doesn't vary much whether the waves are a mere 2 ft. or a solid 20 ft. A viable Championship Tour (CT) competitor for almost a decade, Williams was best known for his performances during the 90's generation of Taylor Steele surf movies.

More recently, Williams was a part of the WSL Championship Tour commentary team where he gave his expert and refined analysis on competition surfing. He's now a coach and mentor for current WSL Champion John John Florence. Ross Williams is no slouch when the waves turn on and will no doubt be hoping for some solid swell in the Maldives. - WSL / Kelly Cestari

"I've been to the Maldives once before and loved it there," Williams said. "The waves are like a mix of the Mentawai Islands and Trestles; super playful and in crystal clear, warm water.

"The Four Seasons Maldives Surfing Champions Trophy looks like a great event. It's a good balance between enjoying the location and tapping into the spirit of surf competition. I think it's great to have an event that pays tribute to the history of surfboard design. The crew that's going is amazing, everyone surfs at a really high level so I'm going to have to get some practice in before I arrive."

Rob Machado will return to the Four Seasons Maldives Surfing Champions Trophy for a second time to compete in the multidiscipline event that suits his surfing more than most. Machado is known the world over for his silky smooth style and ability to rip on all sorts of different and experimental boards. Some people forget however that through the 90s, Machado was a solid fixture on the CT Top 10, even making it to World No. 2 in 1995 and was seen as a formidable opponent by his fellow competitors.

Machado's ability on boards of all shapes and sizes makes him a major threat when competition gets underway at Sultans as he looks forward to catching up with old friends. Rob Macado will return to the FSMSCT in 2017 and it will be a treat to see what he is capable of. - WSL / Bennett

"I've always been a massive fan of this event," Machado said. "Having the three different board types in one event is a really cool concept - it really is an amazing event in an amazing location. To come back for a second time is super special."

Three-time Maldivian National Champion and local wildcard, Ismail Miglal, aka ‘Kuda Issey,' is one of the Maldives' most popular surfers. His 25-year surfing career has included a wealth of international competitions, and event titles throughout Asia but it is his ability at his home breaks, which is most impressive.

Kuda Issey achieved a lifelong dream in 2015 when he founded Raalhu Edhuru: a surf school on a mission to extend the sport's reach around the Maldives through community-based sponsorship programs for young surfers in non-central atolls. Devotion like this to community and surfing is truly commendable and it will be special to see him achieve another dream when he competes against some of his heroes at home this August. With moves like this, Ismail Miglal will no doubt be one to watch in August. - WSL / Tropic Surf

"It is an honor and a privilege to surf our local waves with this line up of legends," Miglal said. "It is an amazing opportunity to be a part of such a special event and I can't wait to be a part of it."

Taking the message of ocean health to the U.S. Capitol, Machado and Surfrider lean into 2021 Coastal Recreation Hill Day.

Drive Thru Australia was the third edition in the Drive Thru series, and was treated to pumping surf at some of the country's iconic waves.

The Los Cabos Open of Surf returns to the schedule in the form of a specialty event featuring some of the sport's icons.

Being legendary style icons of the sport, it is the love of surfing that has sustained their careers.