There have been many other moments that have been deemed incredible down in J-Bay, but these were deemed the most pivotal ones by our panel of experts:

From the mouths of the people lucky enough to have watched Mark Occhilupo surf at Supertubes that incredible year, the one comment that stands out was that he seemed to be able to actually slow down the fastest wave in the world. Until that point, Supers had always been a mad speed run to the bottom of the section, but Occy found time to do radical turns and look good while doing it. His win was simply brilliant and it was the dawning of a new wave of young surfers on Tour. 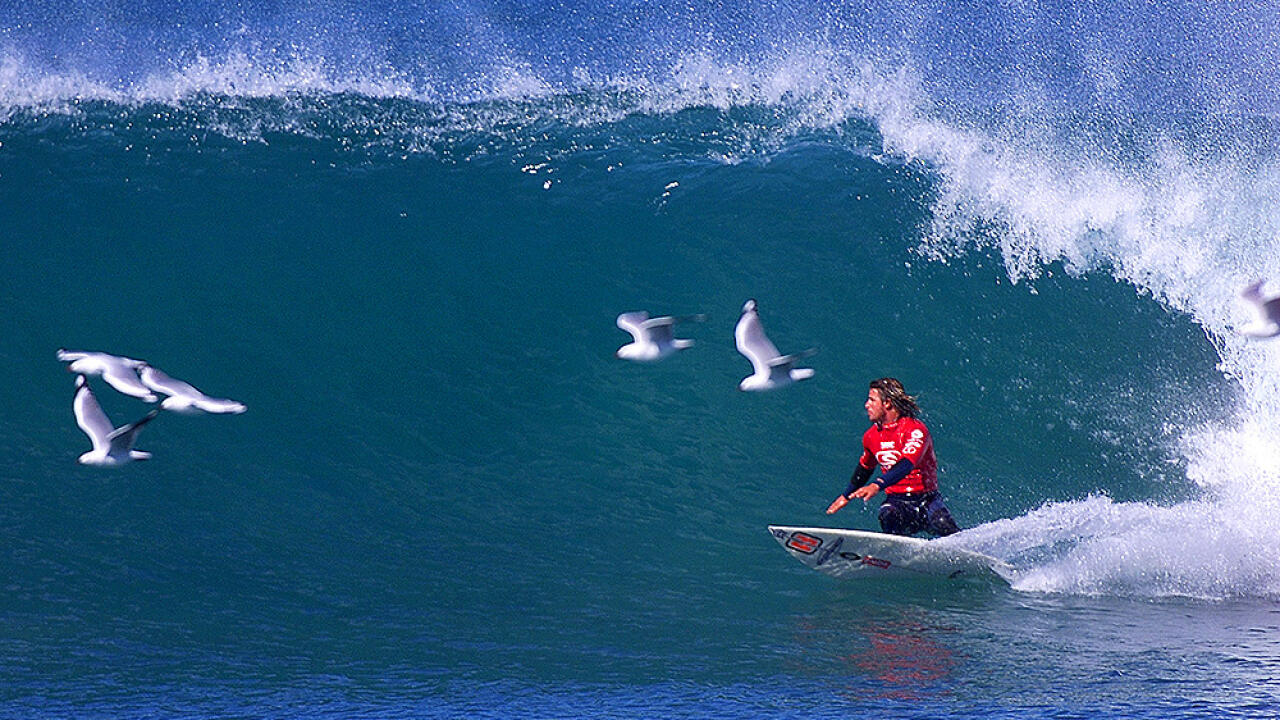 To this day everyone uses a then 18 year old Joel Parkinson's win as a yardstick for what wildcards are capable of at J-Bay. It's always the same: "No excuses, remember what Joel did in 1999?" He made it look so easy, his surfing was sublimely matched to the nuances of Supertubes. And when he won, there was much joy in the land. The roar of the crowd after his final wave will be remembered forever.

Parko: Still Smooth After All These Years
1:49
The silky-smooth Australian shows why his surfing is such a perfect fit for Jeffreys Bay.

When Kelly Slater won the event in 2003, beating Damien Hobgood in the Final, it was the event win that so many had been hoping for. Kelly was back from retirement, but the world was wondering if he would be able to find the competitive animal again. Or if he would be too complacent and attuned to free surfing perfect Rifles and other exotic waves he had discovered in his free surfing sojourn. It turns out the animal in him was still a beast, and this event was quite possibly the one that reignited it. Even Kelly Slater gets stoked about coming to J-Bay, despite the jet lag. - WSL / Pierre Tostee

The judging decision on the final wave that Kelly surfed in the Billabong Pro Jbay final against Andy Irons has been scrutinized time and again. It was a solid Supers wave, a good eight foot, and after three huge, critical moves, Slater fell hard on his last turn. Still, it was deemed enough to beat A.I., much to his visible chagrin, and the rivalry added another thorny element to it going forward.

Kelly Slater at Supertubes
2:16
Kelly Slater and Filipe Toledo both enjoyed a bit of tube travel in their Round One match at the J-Bay Open.

A huge swell and a massive Spring Tide washed all the sand from the beach, even washing underneath the wooden walkways at Supers, and all that sand found its way down to the Impossibles section. It formed a ridiculous new section to the wave and surfers were getting the most insane barrels in a position where they normally should have been kicking out. Taylor Knox stole the show with a 9.8 and a 9.7 score in his top two, and a 9.0 as his throwaway score. His opponent, Joel Parkinson, also made good use of the sand by scoring a perfect 10-point ride, but the best he could do for a backup was an 8.0, still not enough to turn the heat. During his time on the CT, Taylor Knox was known as one of the best surfers on Tour at J-Bay. - WSL / Kirstin Scholtz

It was a strange old year, and local wildcard Sean Holmes defeated Kelly Slater in Round Three, then went on to defeat Andy Irons in Round Four. He did it all to raucous cheering from the delighted local crowds. Little did everyone know, he did it all with a tweaked back. Turns out Sean had warmed up a bit too vigorously the day before and had pulled a muscle in his back, so he was surfing gingerly. Which is a helluva way to beat two World Champions. So, what did it all boil down to? When I asked him on the beach after he beat Andy he told me he was wearing a lucky watch. You can't make this stuff up. The Semifinal in the Billabong Pro J-Bay 2010 with Jordy against Bede Durbidge was a close one, and Jordy needed two good waves with very little time left. He picked up a grower - a wave that got bigger as it moved further down the line - and did enough to beat the big Aussie. In the Final, Jordy went as hard and as fast as he could in the beginning of the heat on every wave that came his way, while Adam Melling stayed patient and waited for set waves. The thing was, the onshore winds came in fast and were strong enough to destroy the sets. Nothing came for Melling, he got skunked. Jordy's local knowledge and relentless approach won him his first CT victory and saw him into first place on the ratings leaderboard. He finished ranked second overall that year. 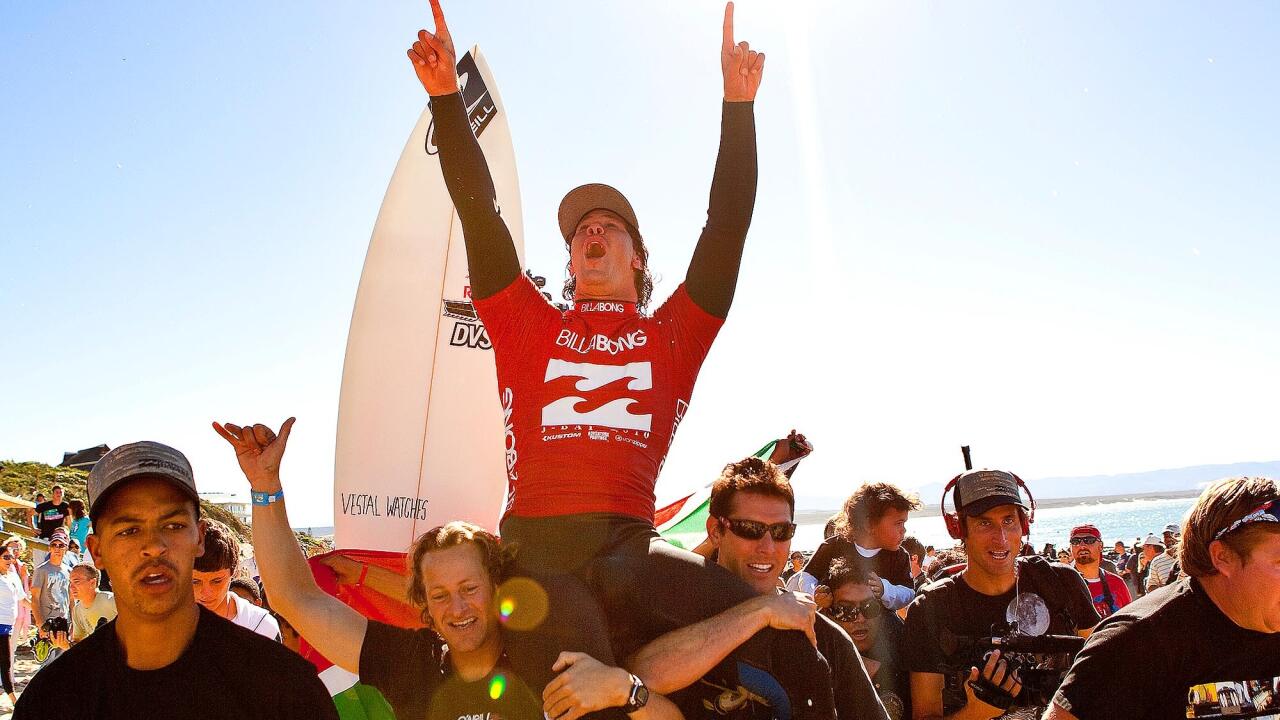 The biggest drama of the event in 2014 was the surf forecast. It was showing plenty of promise with a few good days still to come, so the contest officials and commissioner decided to lay off until the final day of the waiting period, which looked epic. Then something happened to every chart in the world, all the swell drained from the forecasts, along with all the color in the faces of those same officials, with just one day to go. Local surf consultant Eric Stedman said that there was an error, that much swell doesn't disappear. Swells just don't turn right and head out to sea before hitting J-Bay. Thankfully, he was spot-on. The Final was held in flawless eight-foot surf. Mick Fanning beat Parko in the Greasy and Lemmy Final.

Parko at J-Bay
Joel Parkinson nabs a 10-point ride in the J-Bay Semifinals, with two tubes along the way.

There's not much more that can be said about the shark incident in 2015, except for the valor of Julian Wilson. It was a crazy moment -- the youtube video clip has finally slowed down at about 24 million views -- and there were tears on the beach afterwards. No one wants to see a fellow surfer in that much distress and no one wants to see a surfer get hit by a shark. It was an incident, not an "attack." And it had an ending that wasn't sweet, but it also wasn't terrible. No surfer should ever have to go through what Mick Fanning went through in 2015. Fanning and Slater share a moment after the incident. - WSL / Kirstin SCholtz

There are many people who would choose to never paddle back out at Supers after a situation like Mick faced. We cannot judge them. Mick, however, wanted to get back on the horse that bucked him off and decided to go straight back to Supers, surf another contest, throwing all the demons and monkeys off his back in the process. Well, he went one further and won the whole damn thing. His surfing in the Final against John John Florence was some of the fastest and most inspiring surfing seen at Supers. The waves were small and zippering along the shelf, but the two surfers went toe-to-toe, with Mick getting the nod. It was almost as if, after the shark incident the previous year, the surfing world seemed to mend itself right there and then.

Fanning's 9.93 in 2016 Final
1:59
Mick Fanning found a near-perfect ride to maintain control of the lead in the J-Bay Final.

Check out a selection of fine surfing imagery from Santa Barbara, Azores.

Melling earns the highest score of the heat so far with an 8.00 in Round Two Heat 11.

For his second entry to the GoPro Challenge, the Aussie found his way through to the foamy end-section of a Hawaiian righthander.