Despite glassy conditions to start the day, strong onshore winds arrived early and forced event organizers to call off competition after running eight heats at the Men's QS 3,000 Maui and Sons Arica Pro Tour presented by Corona & Canon. The final five heats of Round 1 were completed and then the action turned up a notch as the event's top seeds entered the water in Round 2.   A slight drop in swell still provided plenty of excitement as solid waves in the 6 ft. range (2 meters) offered slabby barrels at the main break of El Gringo. The raw power and the high risk/high reward atmosphere in Arica attract a certain type of surfer. Alvaro Malpartida (PER) has a strong affinity to the surf at El Gringo and his performance on Wednesday shows that he has been putting in his time at the heavy water reefbreak. 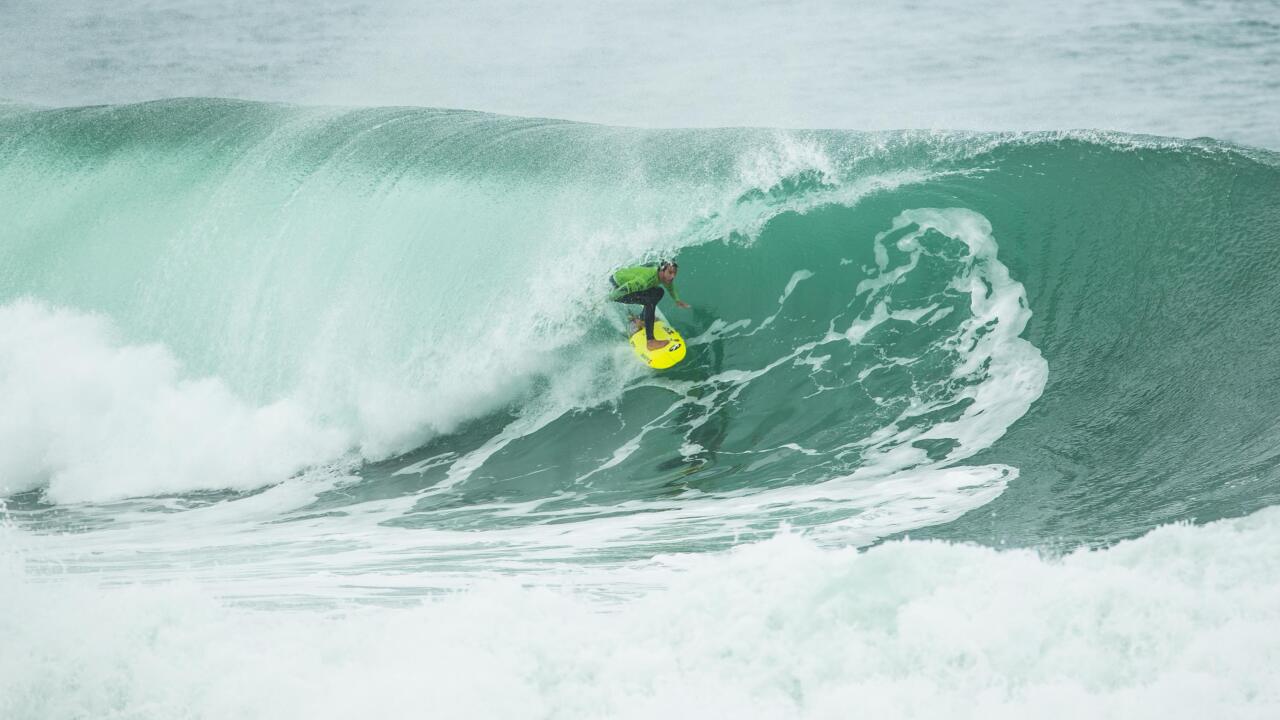 Looking completely at ease in adverse situations, Malpartida caught deep barrels to earn an 8.67 for the highest single wave score of the competition, and then added a 6.50 for the highest heat total of a 15.17 in Heat 2 of Round 2.   "I love coming to Arica and I think that the wave at El Gringo is one of the top-five waves in the world," said Malpartida, who won the contest in 2013. "I love the danger of surfing here and especially all the amazing barrels you can get. I have a lot of respect for this wave, but I have a lot of love for it too. It's the kind of wave you need to build a relationship with and over time, it can show you its magic." In a stunning upset, last year's winner of the Maui and Sons Arica Pro, William Aliotti (FRA), was eliminated from competition after coming in 3rd place behind Malpartida and young Brazilian surfer João Chianca.   Hailing from Maui, Braiden Maither (HAW) felt right at home in Arica after nabbing the day's first quality tube-ride in Heat 13 of Round 1. Maither dropped into a hefty set wave that exploded onto the reef and ran down the line like a freight train.   "It's a lot of fun out there and the wave is exactly like a place I surf back home. Even the key holes to get in and out of the water are identical," Maither said. "I rode a 5'11", which I guess is pretty small for here, but I didn't bring any step up boards. I don't know why. But I'm used to surfing heavy waves like these with smaller boards because you have more control in the barrel. I'm just glad it's not as big as it was yesterday (Tuesday)," said a relieved Maither. Advancing to Round 2, Maither will have to face a stacked heat that includes two elite Europeans - former CT surfer Aritz Aranburu (ESP) as well as flashy Portuguese surfer Nic Von Rupp. And headlining the heat will be top tier barrel-rider Chris Ward (USA) who looked sharp in Round 1 and is hungry to advance in Chile.   Setting off Round 2 action, Skip McCullough (USA) used extreme patience and only caught two waves in Heat 1. However, in a slow heat that was affected by tide and wind, McCullough took first place with a 10.16 total. The 2016 WSL Junior Champion Lucas Silveira (BRA) advanced in 2nd place, eliminating Danny Fuller (HAW) and Raoni Monteiro (BRA) from the competition. After earning a 7.33 on his best wave, McCullough, who has family in Peru, had this to say:   "Wow, that was the best barrel of gotten at El Gringo. It was the first time I was able to catch a lefthand barrel since I've arrived. I've been here for three days already and I think the South American blood finally helped me out (laughs)," McCullough joked.   A call is set for 7:00 am local time to continue with Heat 4 of Round 2. Current WSL South America rankings leader Thiago Camarão (BRA) will be matched up against Yage Araujo (BRA), Nahuel Amalfitano (ARG) and Ale Diaz (CHL).