Vital points on are on offer for those hoping to make a run toward the Top 4 to earn a spot into the World Junior Championships starting tomorrow at the RVCA Pro Junior presented by Jack's Surfboards. This event will also coincide with the benchmark Newport Beach Surf Championships, now in its 29th year of running, once more as the Pro Junior contest begins to grow its own history.

Defending event winner Tyler Gunter prepares for a repeat victory to solidify his spot within the Top 4 as he currently sits at the No. 4 on the rankings. Gunter was the only North America representative able to earn points at the previous Vans Pro Junior which gave him an edge heading back to his hometown of Newport Beach. The battle for two more spots will be waged between a number of competitors vying for them as Ryland Rubens and Che Allan are all but set among the top of the rankings. 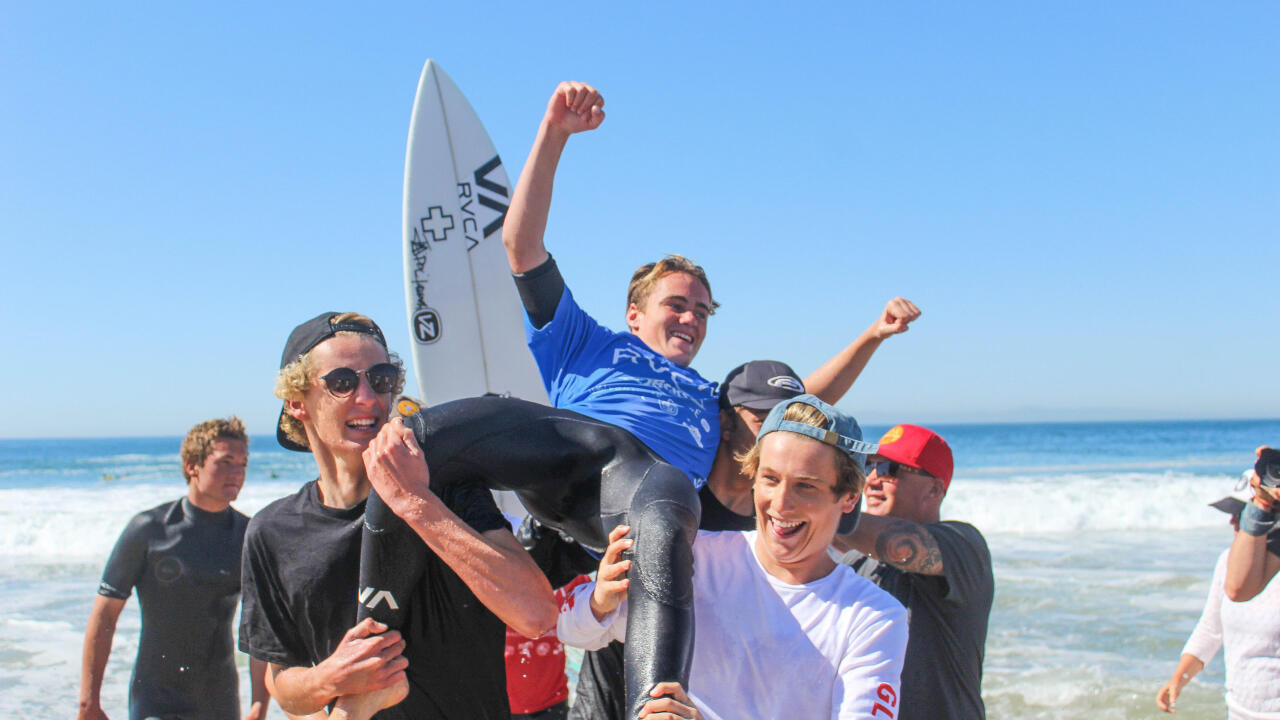 Tyler Gunter's first-ever chair-up the beach at last year's event is a feeling the Newport native will hope to replicate. - WSL / Andrew Nichols

"It feels so good to be back in Newport and having a Pro Junior at my homebreak again," Gunter said. "Winning last year was so insane, I really hope I can do it again. I'm feeling good after my final at the Vans Pro Junior. This is a really good opportunity for me to secure a spot in the top 4 but I'm not going to think of that going into it. I think it's really important to go one heat at a time and not to look at the big picture. This has been one of my better competitive years, I have learned so much and I will be taking all of that into this contest. I think the main thing I have learned is how to have a lot of fun in heats so I think I'm going to just keep doing that and hopefully it works out." Sitting just ahead of Gunter by a mere two points is Santa Cruz, California, native John Mel. This marks Mel's final year as a Pro Junior as he turns 18 later this year and will age out of the junior ranks. But, the 17-year-old is having his best year to cap off his Pro Junior career and now looks to finish the job -- starting with the RVCA Pro Junior.

"It's epic having the event come back since I feel really comfortable here because I used to live in Newport for about four years," Mel Said. "Being in 3rd is still a pretty scary spot with only two events left and a few people that are close behind me. I just have to make sure to keep bettering results and take it heat by heat. Lately I've been surfing a lot by going on a few trips to get clips and good waves. I've also been trying out yoga to loosen myself up -- I grew so fast my body is a little crooked (laughs). I just have to be sure to keep making heats here." While Mel and Gunter sit at the No. 3 and No. 4 spots, less than 500 points separate the next ten surfers in line to contest for a chance at World Junior Championships. Among those is current No. 11 Eithan Osborne who missed out on the first event of the year due to a serious knee injury and continues to find his form -- despite re-injuring the knee. While Osborne has no room for error as he won't be dropping any results at season's end, the 18-year-old comes into Newport Beach with a fresh mindset and big goals.

"I had a major tore my meniscus, 80 percent of it, in September and I had to have surgery so I was out of the water for five months," Osborne said. "I did the Cabo contest and right after I reinjured the same meniscus. The repair didn't work. I had another surgery and this time they removed 90 percent of the meniscus so the rehab was much faster. After those injuries, I felt some kind of pressure to do good and it came out the opposite, I didn't do very good in the last two events. So I decided to go on a trip, clear my mind, and free surf to get my confidence back. It was a good decision. I feel much better, in a better place and I hope to bring that energy back to compete."

The RVCA Pro Junior presented by Jack's Surfboards will begin September 22 through 24 at the 54th Street Jetty in Newport Beach.