A surf dynasty in the making, Moniz comes from a family of titleholders including father Tony Moniz, who has dominated Pipeline in the past, and sister Kelia Moniz, a 2x World Longboard Champion. Josh has been campaigning on the International QS for over five years and today's victory marks his first - and best - win of his career since 2015, when he had back to back wins at the Pipe Pro Junior and Martinique Surf Pro. A well-deserved win for the Honolulu native, Moniz inspired family, friends and fans as he perservered to victory. - WSL / Keoki Saguibo

"100 percent this is the best win of my professional career," Moniz commented after the awards presentation. "The only win that will get better is a Pipe Masters so hopefully down the line I can do one of those. But for now, this is by far the greatest win, I'm going to remember this forever." Josh comes from a family of 7 and they all turned up to celebrate his win, left to right: Mom Tammy, dad Tony, brothers Micah and Seth, Josh, brother Isaiah, sis Kelia and coach Rainos Hayes. - WSL / Tony Heff

An event for the underdogs, the final day of the Volcom Pipe Pro took place on Super Bowl Sunday and rivaled the entertainment with perfect, barreling surf. Wave faces exceeded 15ft. and athletes feasted on conditions that many are calling the best of the 2017/'18 winter season.

"End of Pipeline and I won? I can't believe it!" Moniz continued. "It was a long day, when I woke up this morning I kind of had a feeling it was just coming together for me. I've never had an event out here really work in my favor and I had a lot of low scoring heats all the way up into the Semis, and so I just told myself, this is it, I can do it, it just came together. I'm just so stoked to finally win an event again, it's been a while."

In the Final, Moniz went against O'Brien, who ultimately claimed runner-up, Weslley Dantas (BRA), who took third, and Cam Richards (USA), who earned fourth, all who put in phenomenal performances throughout the entire five days of competition. The last heat of the day garnered a mass of fans who eagerly cheered on their favorite surfer, and with Dantas and Richards shaking up the home-field advantage, it was an event for the history books. 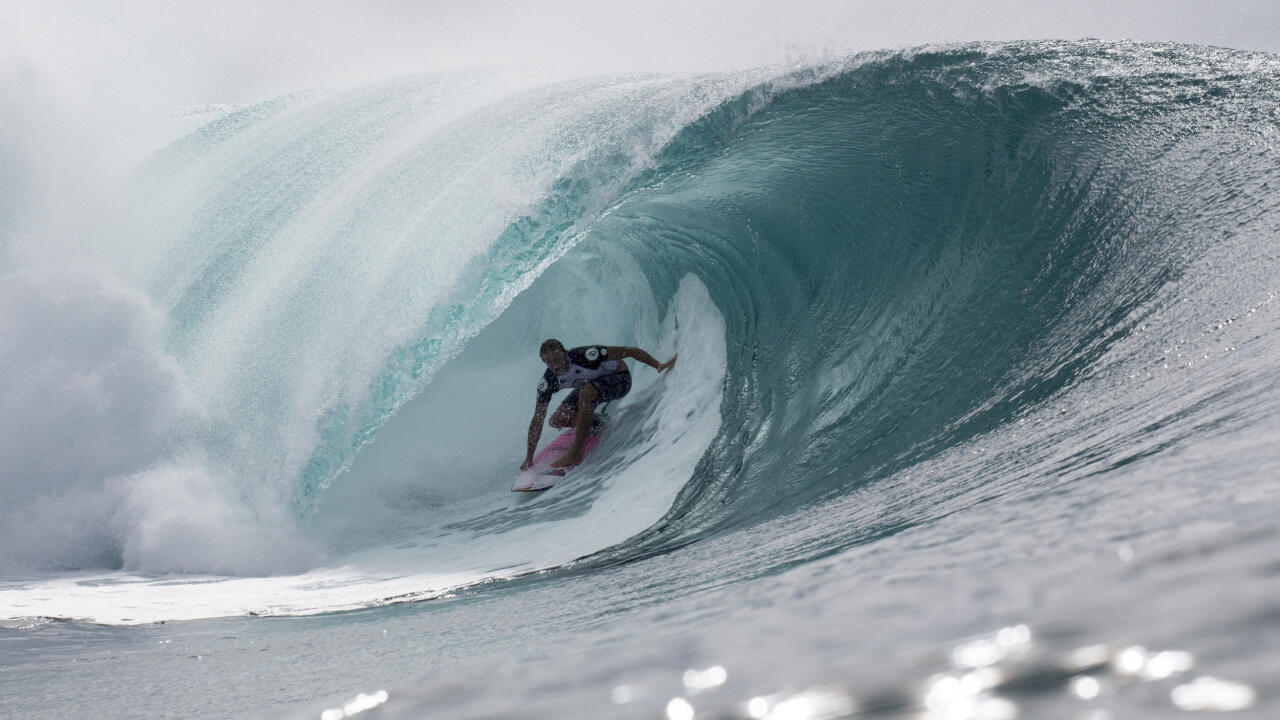 O'Brien's backhand attack at Pipeline is considered one of the best, however, Moniz was able to one-up this with a combined heat total of 17.56. - WSL / Keoki Saguibo

O'Brien dropped the first wave of consequence in the 30-minute Final, a 7.43 for tactical surfing and a perfect backhand approach on a Pipeline barrel. After a couple missed opportunities by Moniz, he redeemed himself with a late takeoff and extremely deep barrel, disappearing behind the curtain and pumping on his backhand to pull himself up and into the pit for an 8.83 from judges.

Dantas, a powerhouse surfer and brother of former CT athlete Wiggolly Dantas (BRA), found a beautiful left that earned him a solid 5.93. Meanwhile Richards rolled into a couple of big, foamy and seemingly unmakeable barrels, the type of surfing that made him a true standout of the event. But neither were able to catch up to the precedence set by Moniz and O'Brien and the second half of the heat was a battle between the two locals. Richards enjoyed his first proper Pipeline barrels at this year's event, and made an impressive run to the Final after a few incredible rides throughout five days of competition, including a perfect 10 on Day 3. - WSL / Tony Heff

Cheers from onsite fans matched those in the Minneapolis stadium as O'Brien dropped a perfect 10-point ride in the Final for a massive late drop into a beautiful wave. With expert technique, he steered through the foam ball then hit the brakes for another barreling section and steadied himself on the board while dodging through the exit, both hands raised in utter triumph. But with Pipeline churning out perfect waves all day long, it was only a matter of time and positioning before Moniz surpassed O'Brien for the win.

"I've lost a few times in the last five minutes, sometimes in the last ten seconds, you never know until it's over," said O'Brien. "He (Josh) got the lead back from me and then I got a perfect ride and I felt like I just needed to back up my seven and I would have had a better chance of winning. I was in the lead with my perfect 10, really stoked I got that in the Final, but I'm stoked for him."

All competitors threw themselves over the ledge during the 2018 Volcom Pipe Pro, which historically sees some of the best surf all season. Another standout performer was Carlos Munoz (CRI) who added another perfect 10 to the event in his Round 5 heat today against Marco Giorgi (URY), Ezekiel Lau (HAW) and Takayuki Wakita (JPN). Munoz wowed judges and fans after threading through a long Backdoor wave and negotiating the treacherous foam ball, eventually blasting out of the barrel with a clean exit. Each year, Volcom honors legendary waterman Todd Chesser - who passed away much too early in 1997 while surfing an outer reef break on Oahu - with an award presented by Todd's mother, Jeannie Chesser. This year, Australian phenom Jack Robinson took home the prestigious honor and was called up to the awards stage to receive the handmade trophy from Jeannie.

"It's such a big thing, especially out here, so many other guys that charge and I was absolutely honored that she picked me," said Robinson. "I work my butt off at every event out here, especially when it's always a caliber of these guys at any Pipeline contest, so it's nice that they recognize it." No one disputed Robinson's hard charging ambitions or time put in at Pipeline. - WSL / Keoki Saguibo